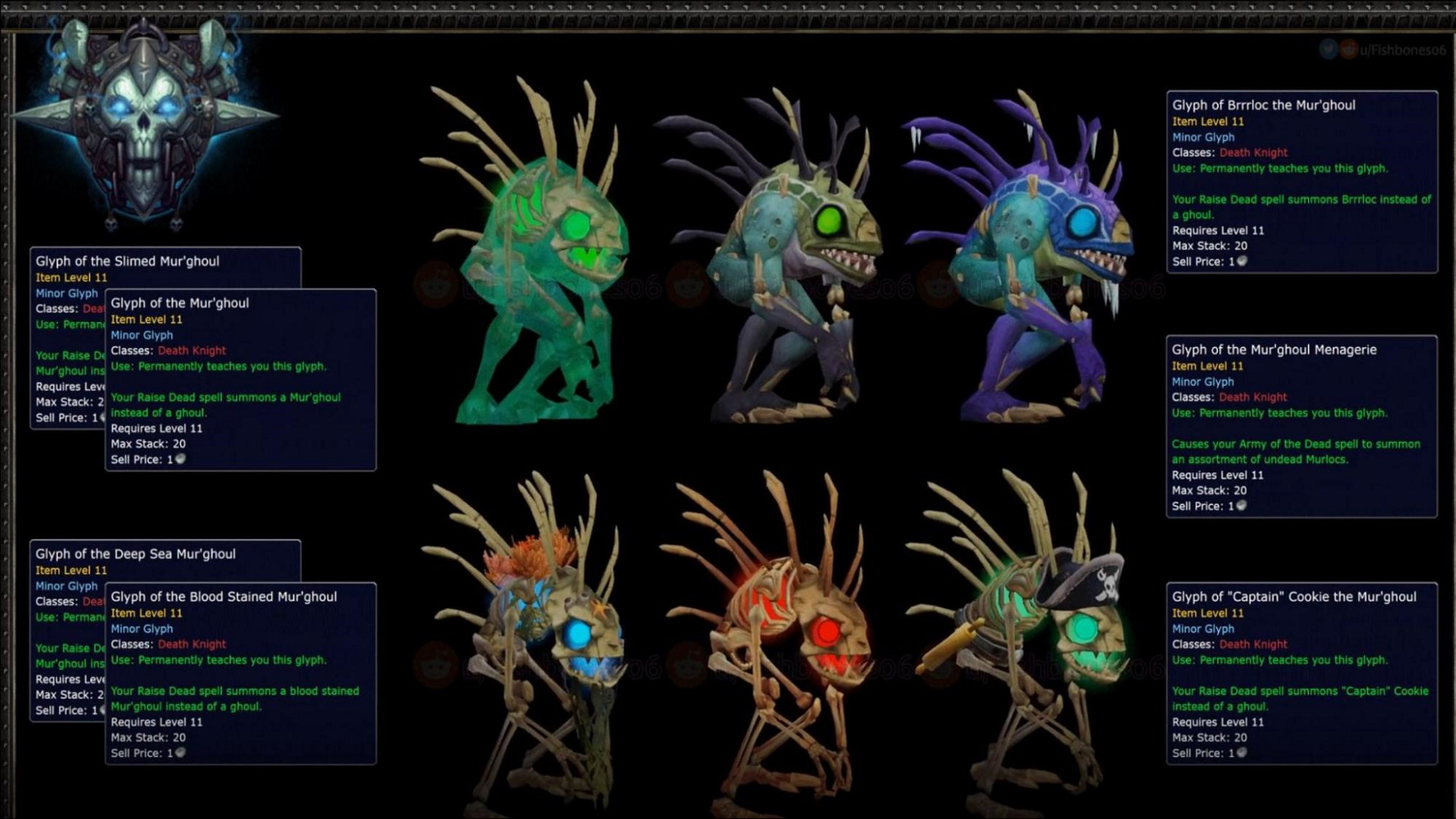 World of Warcraft draws on many disparate inspirations, from Tolkein to Norse mythology, internet memes to anime, but the MMO game still manages to spawn (pun intended) a respectable amount of fresh concepts. One of the most beloved (and reviled) of these is surely the humble Murloc. The Murlock is partially based on Lovecraft’s Innsmouth fish-people, but Warcraft introduced a new element to the spooky humanoid amphibian: being skin-peelingly annoying. Any seasoned player who’s levelled in the Wetlands or Dustwallow is occasionally awakened at night by the vivid memory of moist murder goblins ganking them, gargling warbles ringing in their ears as consciousness fades.

Despite the Murloc’s reign of terror in low-level zones and their obnoxious gargles, they’ve become something of a mascot for World of Warcraft, with multiple official Blizzcon tie-ins and countless community creation tributes.

One such set of creations comes from Reddit user Fishbones06, a 3D artist and WoW aficionado who routinely creates professional-grade 3D art that could easily pass as official artwork. Their latest creation is a set of 3D models designed as Glyph enhancements to various Death Knight ghoul-summoning abilities, though given what they’ve been turned into, “enhancement” may be subject to debate. Amongst the generic undead murlocs, we also have “Brrrloc”, a reference to a Hearthstone card, and the skeletal remains of Captain Cookie, former end-boss of The Deadmines.

Once upon a time, Glyphs were introduced as modifiers to class abilities. They originally improved skills mechanically, making them a key part of building a character. Blizzard later made them cosmetic only, and then Glyphs were removed altogether and replaced with Class Tomes.

Sadly, many fun cosmetic changes were lost in this transition. Death Knights had access to several Minor Glyphs which changed their summoned ghouls into different undead creatures, but all were removed when Glyphs went the way of the dodo. The last survivor is the Class Tome “Corpse Explosion”, allowing the user to arbitrarily explode their ghoul in a shower of viscera. Given how divided opinion is on Murlocs, this would likely be a popular option were these excellent 3D models integrated into the game.

If you haven’t had your fill of WoW info for the day, check our run-down of the upcoming nerfs to Sepulcher of the First Ones so you’re fully up to date with what’s coming.