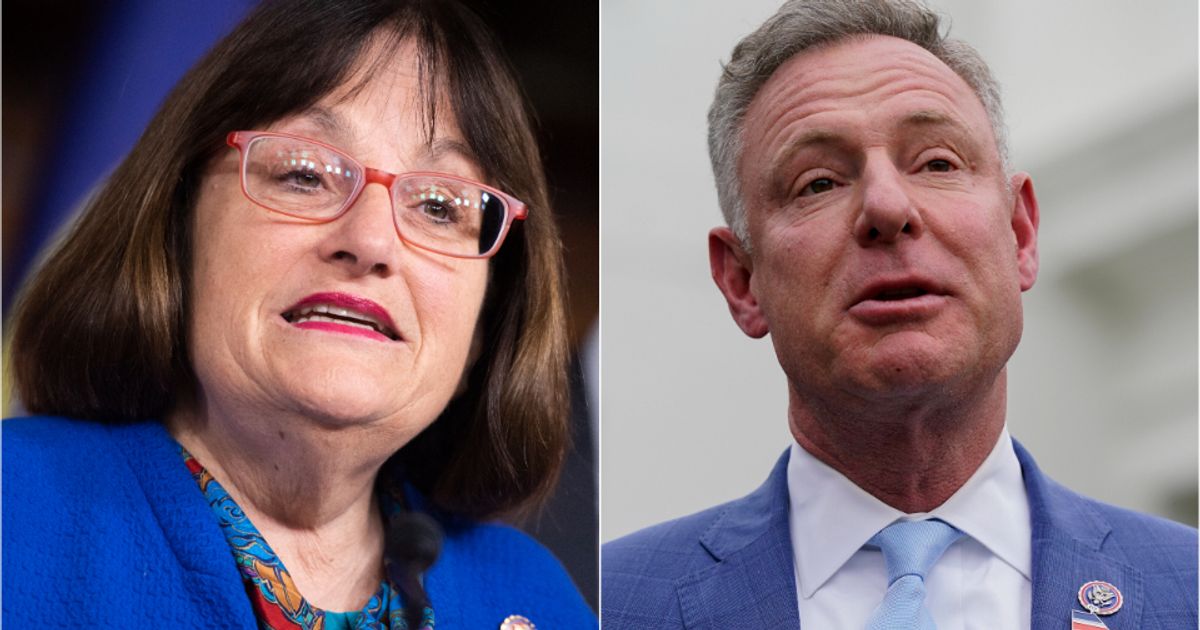 As Republicans prepare to take over the House with a narrow majority, House Democrats’ largest moderate faction, the New Democrat Coalition, is poised to play a potentially critical role in bipartisan legislation.

Members of the business-friendly bloc are due to meet on Thursday to elect a new chair, who is likely to become one of the Democratic House minority’s more important figures.

Perhaps as a result, the normally sleepy contest to chair the business-friendly caucus has turned into a contentious fight between two vice chairs: Rep. Scott Peters of California and Rep. Annie Kuster of New Hampshire.

In a bid to undermine Peters, Kuster, her allies and advocates for affordable prescription drugs are shining a light on his role as a prominent obstacle to legislation empowering Medicare to negotiate lower prescription drug prices.

President Joe Biden’s Inflation Reduction Act ultimately included provisions enabling Medicare to negotiate lower prices, but the objections of Peters and a handful of other Democrats resulted in concessions to the pharmaceutical industry that made the final bill weaker. Among other things, Medicare is now required to negotiate a smaller number of drugs on an annual basis than it would have under Democrats’ original proposal.

“Kuster was one of many Democrats from competitive districts who fought to advance the drug pricing initiative,” an aide to a member of the New Democrat Coalition told HuffPost. “It was clear she did not agree with those who worked to water down the drug pricing provision at the expense of frontline members and the American people.”

Peters, who received more campaign cash from pharmaceutical industry PACs in 2022 than any other Democrat in Congress, insists that his pressure helped turn the House’s drug pricing bill into something that would pass the Senate. Sen. Kyrsten Sinema (D-Ariz.), in particular, held up the bill on the grounds that it risked curbing innovation in the industry.

“It’s a curious thing to be critical of the congressman for achieving an extraordinary legislative achievement,” Mary Anne Pintar, Peters’ chief of staff, told HuffPost. “Because of his work, that plan was able to earn Senate support.”

“He was seeking true reform rather than political expediency,” she added.

In a Politico article recounting the highlights of departing House Speaker Nancy Pelosi’s tenure in the House, Peters even depicted Pelosi as his co-conspirator in silencing progressive complaints about the compromise he brokered.

But Democrats and other people involved in drug price negotiations tell a different story, taking particular issue with the idea that Peters deserves credit for resolving an impasse he helped create.

“It’s like the bank robber who wants credit for the successful release of the hostages,” said a senior Democratic House aide who was closely involved in the prescription drug legislation. “It insults members’ intelligence.”

In 2019, Peters voted in support of H.R. 3, a stand-alone bill empowering Medicare to negotiate lower drug prices that contained stronger provisions than the bill that became law earlier this year. He even issued a statement touting its benefits for “seniors in San Diego,” part of which he represents.

Since Democrats did not control the Senate or the White House at the time, however, the bill did not advance. And Peters has subsequently said that that was why he voted for it in 2019.

But in 2021, with united Democratic control of the federal government, the stakes of the fight were real — and some Democrats had second thoughts. Echoing the concerns of the pharmaceutical industry, Peters warned that the bill — in the form that passed the House two years prior — “would really deal a deathblow to American innovation.”

Peters stuck to his guns, though. In September 2021, he and two other Democrats — Reps. Kurt Schrader (Ore.) and Kathleen Rice (N.Y.) — provided the decisive votes to prevent the prescription drug portion of what was then the Build Back Better bill from advancing out of the influential Energy and Commerce Committee. Kuster, who is also on the committee, voted for it.

The bill still advanced to the House floor via the Ways and Means Committee, where Florida Democratic Rep. Stephanie Murphy’s “no” vote was not enough to stop the bill. But collectively, the group of four Democrats, including Murphy, had made it clear to House leadership that they would not sign on to a bill until it gave Big Pharma more leeway.

David Mitchell, founder of the nonprofit advocacy group Patients for Affordable Drugs Now, maintains that Peters and his allies weakened House Democrats’ bargaining hand with Sinema and other reluctant Democrats in the Senate.

“Our goal was to get the strongest possible bill out of the House and in fact, it was Scott Peters who led the effort to water it down,” said David Mitchell, head of Patients for Affordable Drugs. “Scott Peters has been and continues to be a handmaiden of the industry.”

“For him to now say, ‘I knew what would pass the Senate,’ is really the height of arrogance,” he added.

The senior Democratic House aide conceded that Democratic leaders were talking to Sinema and her staff throughout the House’s lawmaking process, and thus it’s unlikely that Peters weakened the bill more than it already would have been.

Peters’ bigger impact was in drawing negative media attention to the issue at a time when Biden’s standing in the polls was taking a nosedive and few voters were even aware that Democrats were tackling the issue of prescription drug prices, the senior aide said.

“Him being the ringleader of blocking this out of Energy and Commerce led to this wave of terrible headlines about Democrats blowing it on drug pricing, or Democrats unable to advance drug price negotiations. It was exactly the wrong way to hear about this great thing that Frontliners in particular were depending on,” the senior Democratic aide said, referring to “Frontline” Democrats in swing seats vulnerable to a Republican takeover.

“Scott Peters has been and continues to be a handmaiden of the [pharmaceutical] industry.”

The political stakes of the debate are especially galling to Peters’ critics. Centrist Democrats can often justifiably frame their divergence from party leadership on issues like climate change, student debt or taxes as a political necessity for someone in their state or district.

No such rationale exists for watering down Medicare’s bargaining power with big drug companies. Polls regularly show that the vast majority of Americans, including independents and Republicans, support empowering Medicare to negotiate lower prices on prescription drugs.

What’s more, Peters serves in a solidly Democratic district. But vulnerable Frontline Democrats were evidently fearful that the final spending bill would not include a strong prescription drug component.

In July, Rep. Susan Wild, a member of the New Democrat Coalition from Pennsylvania, led a letter from 14 Frontline Democrats to Pelosi and other party leaders demanding that the spending bill empower Medicare to not only negotiate lower prices for seniors but that it also have the power to negotiate prices for private health insurance enrollees.

“With public support of Medicare price negotiation of prescription drugs at nearly 90%, it is time to take action,” the letter stated.

Kuster alluded to those members’ concerns in a Nov. 23 interview with Punchbowl News about her bid to lead the New Democrat Coalition.

“There were members, and particularly Frontline members, who felt that if we could have resolved [the drug pricing bill] earlier … we would have been in a stronger position to negotiate with the Senate and they would have been out campaigning on it last spring,” Kuster told Punchbowl News.

Of the four House Democrats who leveraged their votes to water down prescription drug price reform, Peters is the only one who is returning to Congress. In a Democratic primary in May, Schrader lost to a progressive challenger, who attacked him for his stance on prescription drugs and reliance on pharmaceutical industry PAC money. Rice and Murphy both retired from Congress.

Peters’ ascent to the helm of the New Democrat Coalition would mark something of a return to the bloc’s centrist roots.

In recent years, the caucus has loosened its eligibility criteria, growing to more than 90 members. Rather than oppose aspects of Biden’s agenda, Rep. Suzan DelBene (D-Wash.), the outgoing chair of the New Democrat Coalition, stood out as one of the most outspoken advocates for the expanded child tax credit.

It’s unclear how much members of the New Democrat Coalition plan to weigh the prescription-drug reform issue when electing their next leader on Thursday.

Peters chaired the New Democrats’ political arm in 2018, a cycle in which the bloc raised $3.2 million for its endorsed candidates and contributed over $500,000 to New Democrat candidates and incumbents in the 2022 cycle, according to Pintar, his chief of staff.

Peters’ stance on prescription drugs had not come up in discussions with members of the New Democrat Coalition, Pintar added.

“He wants to use this caucus in a way that appeals to swing voters so we can win back the majority,” she said.

Kuster points to her work as a co-chair of the Bipartisan Addiction and Mental Health Task Force as evidence of her success collaborating with Republicans. She has her own group of supporters within the moderate bloc, including Rep. Haley Stevens of Michigan, who signed the letter backing drug price negotiation alongside Wild.

“They’re both on Energy and Commerce,” Stevens said. “And they voted differently on that bill, and we ultimately ended up getting a big part of the prescription drugs in the Inflation Reduction [Act], but we’ve got more to do.”

But Stevens emphasized that she has a longstanding relationship with Kuster that was the driving force behind her decision.

“I’ve been with Annie for a long time on a variety of things,” she added.