Roughriders overtake Elks in 4th quarter to improve to 2-0 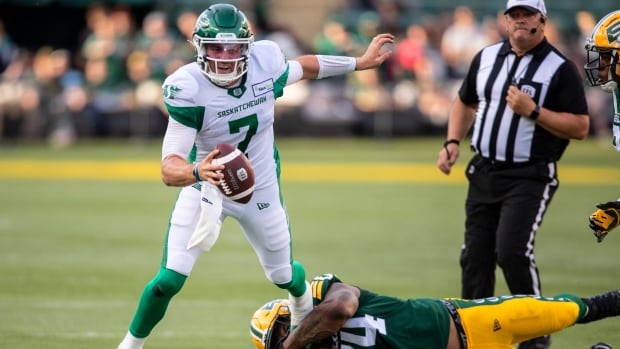 Mitchell Picton’s fourth quarter touchdown catch proved to be the difference Saturday as the Saskatchewan Roughriders remained perfect on the season with a 26-16 victory over the Edmonton Elks.

The Roughriders are 2-0 in the CFL’s early going, after also defeating Hamilton in their opening game.

The Elks dropped to 0-2 after losing 59-15 in their first game to the B.C. Lions, and have now gone nine games without a win at home. Edmonton went 0-7 last season at Commonwealth Stadium.

Saskatchewan struck for a 50-yard field goal from Brett Lauther on its opening drive.

Edmonton was minus-one yard in offence in the first quarter.

There was no further scoring until midway through the second, when Lauther kicked an 18-yard field goal.

After Edmonton’s Matt Thomas recovered a fumble off a missed field goal return at the Saskatchewan 23, quarterback Nick Arbuckle found Kenny Lawler for a five-yard touchdown pass to put the Elks up 7-6 with three minutes left in the second frame.

WATCH | Lawler hauls it in:

Edmonton wide receiver Kenny Lawler leaps in the air and stays in bounds for an incredible touchdown.

Saskatchewan quickly responded with an unconverted touchdown of its own with less than a minute to play in the first half, as Jamal Morrow scored on a two-yard rush.

The Elks opened the third quarter with a 12-yard field goal from Sergio Castillo, who then connected on a 30-yarder to close out the third.

Lauther put his team back in front again with a 41-yard field goal five minutes into the fourth. Castillo made it 16-15 for Edmonton with a 37-yarder midway through the final quarter.

The Roughriders quickly responded with a 28-yard TD pass from Cody Fajardo to Picton, who also reeled in the two-point convert.

WATCH | Roughriders take the lead in the 4th quarter:

Saskatchewan looked to put the game away not long afterwards after a forced fumble recovery by A.C. Leonard, but Lauther missed a 44-yard field goal. He quickly got another chance, however, and nailed a 21-yard field goal.

Both teams are on the road next week as the Riders head to Montreal on Thursday and the Elks are in Calgary on Saturday.