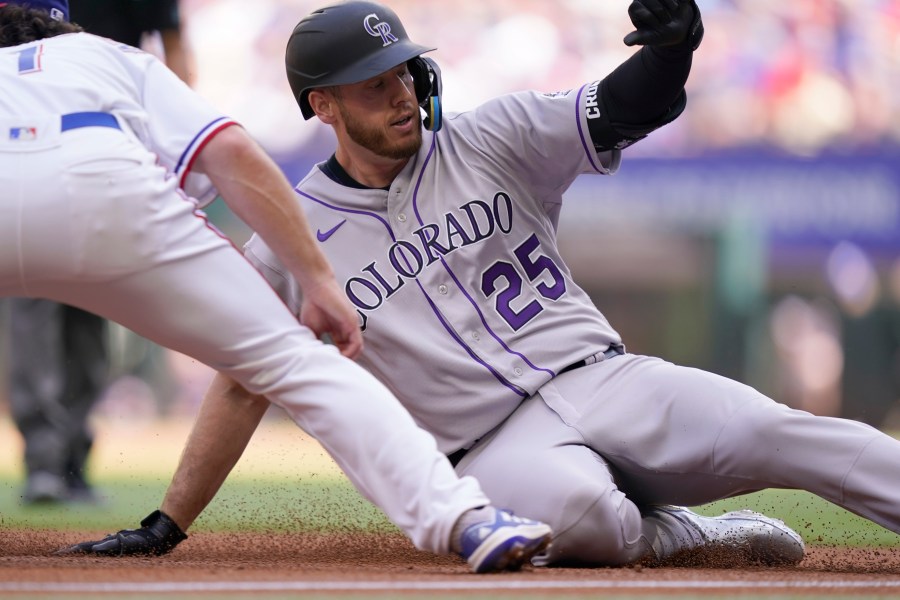 ARLINGTON, Texas (AP)Nearly 1,600 miles away, the final out was determined to end a home-opening loss for the Texas Rangers.

Colorado manager Bud Black asked for a replay review in the bottom of the 10th inning after second baseman Brendan Rodgers, with new Rangers catcher Mitch Garver sliding hard toward him, made an errant throw that allowed a run to score while taking away the chance for a game-ending double play.

Upon further review from MLB headquarters, it was a double play that ended the Rockies’ 6-4 win over the Rangers on Monday.

”At first, I didn’t really think we were going to get the replay. Then I finally saw the replay, and I did think that it probably was interference,” Rodgers said. ”But the heat of the moment, I thought I had to rush the throw a little because I know (Adolis) Garcia can run a little bit.”

After both teams got solo homers in the ninth, Jose Iglesias’ fourth hit was a tiebreaking RBI single in top of 10th inning for the Rockies before Connor Joe added a homer off Greg Holland (0-1), the eighth Texas pitcher.

Garver walked with one out in the Rangers 10th, then was forced out sliding into second base while Rodgers’ relay throw was wide of first – allowing Marcus Semien to score from second and Garcia to move up a base. Black’s challenge was prompted by Colorado’s video coordinator.

”The rule is, you have to make contact with the dirt before the base and you have to slide into the bag first and you have to be able to maintain grasp of the bag or touch the base. All of those things, I did,” Garver said. ”Momentum carried me through the top of the bag. That’s a baseball play, man.”

Umpire crew chief Bill Miller, who relayed the final decision of the replay from the MLB office, told a pool reporter that Garver didn’t maintain possession of the base.

”And he not only did not maintain possession, he came off the base and made contact with the fielder above the knee. That constitutes a violation on two terms,” said Miller, adding he had never had an ending like that.

According to the pool report, the replay center supervisor explained that it was determined Garver failed to engage in a bona-fide slide, while also hindering and impeding the fielder.

Texas manager Chris Woodward was visibly angry after the decision, and was frustrated that he couldn’t get an explanation and really couldn’t argue the call.

”It’s more of a technicality at the end,” Woodward said. ”It’s really frustrating to lose a game like that. … There’s nothing we can do about that. We have to play better baseball, towards the end of games.”

Texas had a 3-1 lead going into the seventh before Colorado scored in each of the last four innings.

The Rockies got unearned runs in the seventh on third baseman Charlie Culberson’s fielding error, and in the eighth on new shortstop Corey Seager’s throwing error wide of first when trying to turn an ending-inning double play.

C.J. Cron, who had an earlier RBI triple, led off the Rockies ninth with a 451-foot homer over the bullpen in left field to put them up 4-3.

Willie Calhoun homered off Daniel Bard (1-0), before Ashton Goudeau worked the bottom of the 10th for his first save after the lengthy review ended the game.

”I saw the replay a couple of times. That rule is in effect for that reason, for protection of the middle infielders. It’s really subjective. It really is. It went our way,” said Black, who got his 1,001st career managerial victory. ”But when we look at that play, there’s a lot of different ways to look at it. It’s a tough call, but it’s in there and the umpires have to make a hard call.”

Seager has hits in all four games he has played for the Rangers, who signed him to a $325 million, 10-year contract on Dec. 1 before MLB’s 99-day lockout. The two-time All-Star threw out a runner at the plate in the first inning, but also had the throwing error in the eighth that allowed the Rockies to tie the game. He was 1 for 5 and scored a run.

The Rangers played their 51st home opener in Texas, and third in the retractable roof stadium which debuted without fans in the COVID-delayed and shortened season in 2020. The first regular-season game played there was a 1-0 win by Texas over Colorado on July 24, 2020.

With an announced crowd was 35,052 in the stadium with a listed capacity of 40,518, it was the first time since 1996 the Rangers home opener wasn’t a sellout.

A matchup of starters in their season debuts with new teams, though Texas left-hander Martin Perez is back with his original big league team. Right-hander Chad Kuhl starts for Colorado after pitching in 100 games (84 starts) his first five big league seasons with Pittsburgh. Perez played his first seven MLB seasons with the Rangers, then left in free agency for Minnesota for the 2019 season and pitched for Boston the past two years.