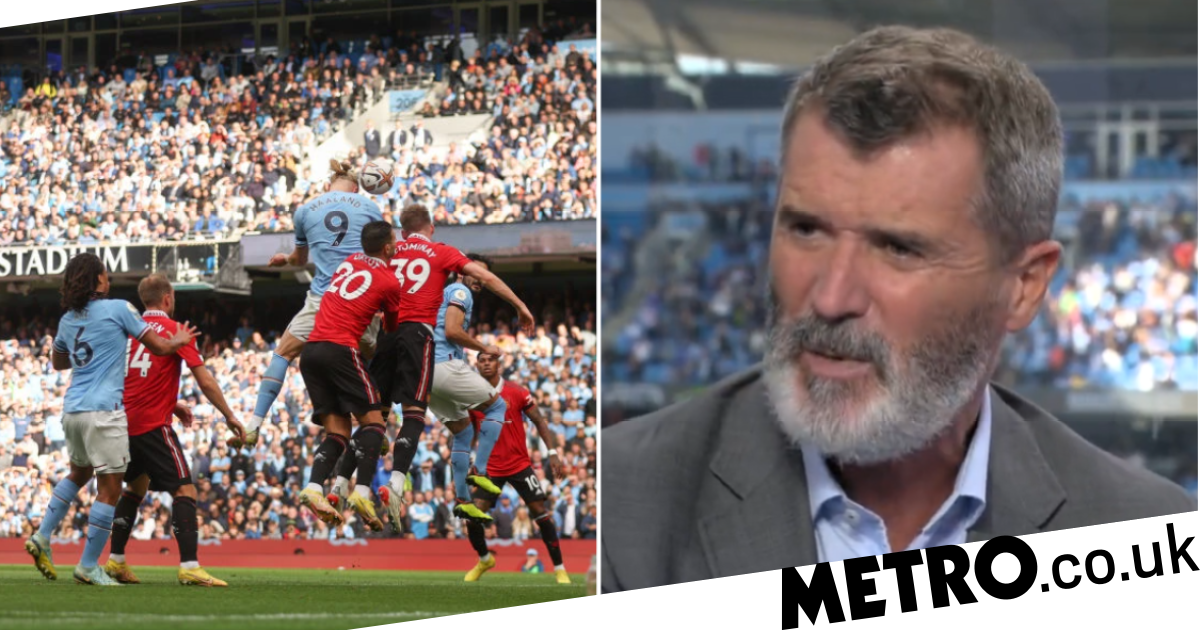 Roy Keane has slammed Manchester United’s first-half showing in Sunday’s derby defeat at the Etihad, saying the team lacked aggression defensively as well as quality on the ball.

The Red Devils went behind after eight minutes when Phil Foden opened the scoring with a fine finish, before 10 frantic minutes before half-time saw Erling Haaland net twice before Foden also grabbed his brace.

Keane was seething with what he saw from United in the first half, with Manchester City good value for their handsome lead, while he was also heavily critical of Christian Eriksen for ‘sleeping’ at key moments.

Asked if he wanted to analyse the first goal during half-time on Sky Sports, a fuming Keane replied: ‘No, I don’t want to [analyse] any of the goals. I’m shocked at how poor United have been.

‘City have been excellent, but the way the game starts: there’s no aggression, you’ve got to close people down, you can’t give Man City this time and space with their quality. It’s far, far too easy.

‘No aggression, you’ve got to stop the cross. Eriksen is sleeping, Foden goes off the back of him, one-touch finish. It’s early in the game, no aggression, try and force them back.

‘United just didn’t start well. Eriksen’s in a good position – I know it’s not his strength, he’s about going forward – but he has [Foden] here and just switches off. Worst start ever from United.’

Referencing City’s breakaway fourth goal, Keane continued: ‘Eriksen here, you’ve got to foul him [De Bruyne]. Foul him, make the sacrifice. He eventually does but it’s too late, United are all over the place, space everywhere, Haaland the quality.

‘Brilliant from Man City. If we needed a reminder of how brilliant Man City are, we’re getting it, but Man United: Oh my god. It’s like the game is too big for them, the occasion has got to Man United’s players. I almost can’t believe what I’m watching.’

Asked why United had produced such a poor display, Keane replied: ‘Maybe a lack of belief. Okay, we gave them some plaudits before the match and there were question marks about the players Man City are missing, but it’s been easy for them.

‘And on top of that, as poor as United have been defensively, their passing has been sloppy, there’s gaps everywhere, the two lads in midfield – McTominay and Eriksen – are getting pulled everywhere, decision-making… and it could get a lot worse.

‘Huge job for the manager at half-time. Do you sit in now and take your medicine or do you have a go because you’re Man United, you’re a huge club, you can’t be too embarrassed.

‘I can’t believe how bad Man United have been. I know they’ve been a little bit better the last four games, and you’re thinking today to counter-attack, but it’s not about counter-attack now. It’s about pride, personality – they’ve not shown it.’

United certainly showed more fight in the second half, scoring three times through an Antony screamer and Anthony Martial brace, but still lost 6-3 to fall eight points adrift of their rivals.