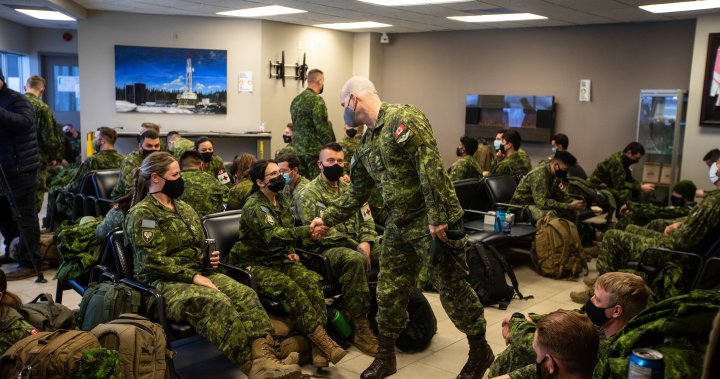 The most recent commander of Canada’s military training mission in Ukraine says the fact Russia has sanctioned him and several of his predecessors alongside dozens of other prominent Canadians is proof the mission had an impact.

Lt.-Col. Luc-Frederic Gilbert is one of six former commanders of the training mission known as Operation Unifier sanctioned by Russia last week as Moscow added 61 Canadians to the list of those now banned from entering the country.

“I’m really proud of what we accomplished,” Gilbert told The Canadian Press in an interview when asked about his inclusion on Russia’s list of sanctioned Canadians. “And this is a great measure of effectiveness.”

Among the other former Operation Unifier commanders sanctioned were Lt.-Col. Sarah Heer and Lt.-Col. Melanie Lake, who also described the addition of the six senior Canadian officers as a sign of the mission’s worth.

Canada first established Operation Unifier in 2015. The move was in direct response to Russia’s annexation of the Crimean Peninsula and its provision of weapons, ammunition and even troops to pro-Russian separatists in eastern Ukraine.

The purpose of the mission, which evolved several times before being suspended ahead of Russia’s invasion, was to help Ukraine transform its post-Soviet military into a modern fighting force capable of defending the country.

The federal government says more than 33,000 Ukrainian soldiers were trained by Canada before the mission was suspended less than two weeks before Russia launched its full-scale invasion in February.

Gilbert was on the ground when the order came down from Ottawa for his 250 troops to pack up and leave Ukraine for Poland prior to Russia’s attack. He says while he understands the order to leave, it was nevertheless “a bit weird for us.”

“Once we were relocated in Poland, this is where we went: ‘That just happened,”’ Gilbert recalled. “The feeling is a bit weird for us because this is against our nature. … We are trained to (fight), we are not supposed to leave in those types of situations.”

Canada and its allies said in the leadup to Russia’s invasion that they would not deploy troops into Ukraine, fearing such a move would escalate the conflict and lead to an all-out war between Russia and the NATO military alliance. Western countries have instead been providing financial and military support to Ukraine and imposed sanctions on Russia.

While planning for the withdrawal of Canadian troops started in November, when Russia first mustered of thousands of troops on Ukraine’s border, Gilbert said it wasn’t until the end of January that everyone realized the threat was real.

Even then, however, there was uncertainty. Gilbert recalled his last meeting with a Ukrainian military officer before departing the country in mid-February, in which the Ukrainian National Guard commander dismissed the threat of a Russian attack.

Gilbert and his troops spent about a month in Poland, during which time finished packing in preparation for their eventual return to Canada. They were also put on standby in case they were needed to provide humanitarian or other assistance.

All trainers under Gilbert’s command have since returned to Canada, though another group of 150 Canadian Armed Forces members recently headed back to Poland to help some of the millions of Ukrainians who have fled Russia’s invasion.

Gilbert himself is now back at Canadian Forces Base Valcartier, where he is in command of 5 Combat Engineer Regiment. However, he is technically still the commander of Operation Unifier, which is on pause but slated to run until March 2025.

Previous Operation Unifier commanders have suggested the Canadian mission helped the Ukrainian military become more nimble by empowering and trusting those further down the chain of command with information and to make decisions.

This has allowed the Ukrainians to defend on multiple fronts and operate in ways that the Russians weren’t expecting, including by deploying small teams who have been instrumental in knocking out tanks and other Russian forces.

Gilbert agreed with that assessment, saying while Operation Unifier also provided sniper training and other specialized instructions, “the small unit tactics is the most powerful demonstration” of Canada’s contribution.

Best Musical Anime That Inspire Viewers to Learn an Instrument

Brayden Maynard excited by what Collingwood Magpies are building