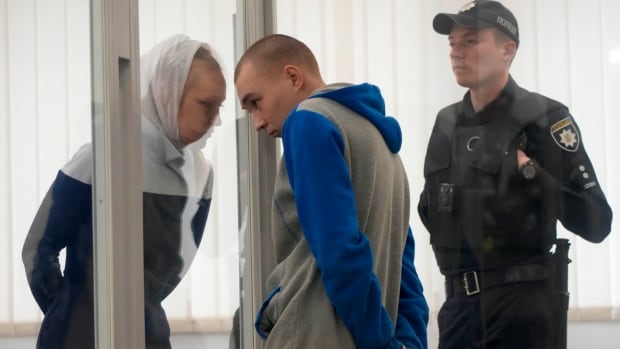 Updates from Day 89 of the invasion

A Ukrainian court sentenced a 21-year-old Russian soldier to life in prison Monday for killing a Ukrainian civilian, sealing the first guilty conviction for war crimes since Moscow’s invasion three months ago.

Sgt. Vadim Shishimarin pleaded guilty to shooting a Ukrainian civilian in the head in a village in the northeastern Sumy region in the early days of the war.

He testified that he shot the man after being ordered to do so. He told the court that an officer insisted that the Ukrainian man, who was speaking on his cellphone, could pinpoint their location to the Ukrainian forces.

He said sanctions need to go further to stop Russia’s aggression, including an oil embargo, blocking all of its banks and cutting off trade with Russia completely.

“This is what sanctions should be: They should be maximum, so that Russia and every other potential aggressor that wants to wage a brutal war against its neighbour would clearly know the immediate consequences of their actions,” Zelensky said.

He said that should be a precedent that will work for decades to come. He also pushed for the complete withdrawal of foreign companies from Russia to prevent supporting its war and said Ukraine needs funding — at least $5 billion US per month.

The Group of Seven leading economies agreed on Friday to provide $19.8 billion US in economic aid to Ukraine to help keep tight finances from hindering its ability to defend itself.

Zelensky said his people’s courage has stirred unseen unity of the democratic world.

His speech was a key focus at Davos, the village in the Swiss Alps that has been transformed into a glitzy venue for the four-day confab ostensibly dedicated to making the world a better place. The event is resuming in person after a two-year hiatus because of the COVID-19 pandemic, which also delayed this year’s meeting from its usual winter slot because of uncertainty over the Omicron variant.

For the attendees, there’s much to tackle amid soaring food and fuel prices, Russia’s war in Ukraine, climate change, inequality and persistent health crises. But it’s hard to predict if the high-minded discussions will yield substantial announcements that make headway on the world’s most pressing challenges.

“This war is really a turning point of history and it will reshape our political and our economic landscape in the coming years,” the event’s founder, Klaus Schwab, said.

In Eastern Ukraine, Ukrainian forces have dug in around Severodonetsk, the main city under Ukrainian control in the Luhansk province of the Donbas, as Russia intensified efforts to capture it. Gov. Serhiy Haidai accused the Russians of “simply intentionally trying to destroy the city … engaging in a scorched-earth approach.”

Haidai said Sunday that the Russians had occupied several towns and cities in Luhansk after indiscriminate, 24-hour shelling and concentrating forces and weaponry there, bringing in troops from Kharkiv to the northwest, Mariupol to the south, and from inside Russia.

But the Ukrainian military said that Russian forces were unsuccessful in their attack on Oleksandrivka, a village outside of Severodonetsk.

Ukraine’s parliament voted Sunday to extend martial law and mobilize its armed forces for a third time, until Aug. 23. Ukrainian officials have said little since the war began about the extent of their country’s casualties, but Zelensky said Sunday that 50 to 100 Ukrainian fighters were being killed, apparently each day, in the east.

While the east is now the focus of flighting, the conflict is not confined there. Powerful explosions were heard early Monday in Korosten, about 160 kilometres west of Kyiv, the town’s deputy mayor said. It was the third straight day of apparent attacks in the Zhytomyr District, Ukrainian news agencies reported.

Polish President Andrzej Duda travelled to Kyiv on Sunday to support Ukraine’s European Union aspirations and addressed Ukraine’s parliament, receiving a standing ovation when he thanked the lawmakers for letting him speak where “the heart of a free, independent and democratic Ukraine beats.”

WATCH | What happened in Week 13 of Russia’s attack on Ukraine:

What happened in Week 13 of Russia’s attack on Ukraine

Ukraine fighters holding the last stronghold in Mariupol surrender and are taken as prisoners of war to Russia-controlled territory. The Russian soldier standing trial for the first war crime of the conflict pleads guilty. In Kharkiv, Ukrainian troops are able to push Russians out to the border. Here’s a recap of the war in Ukraine from May 14 to 20.

Poland has become an important ally of Ukraine, welcoming millions of Ukrainian refugees and becoming a gateway for Western humanitarian aid and weapons and a transit point for some foreign fighters who have volunteered to fight Russian forces.

Western support — both financial and military — has been key to Ukraine’s defence, helping their outgunned and outnumbered forces to repel Russia’s attempt to take the capital of Kyiv and fight them to a standstill in other places. In the face of those setbacks, Moscow has outlined more limited goals in Ukraine, with its sights now on trying to expand the territory that Russia-backed separatists have held since 2014.

Red Sox climbing out of early hole with much-needed streak