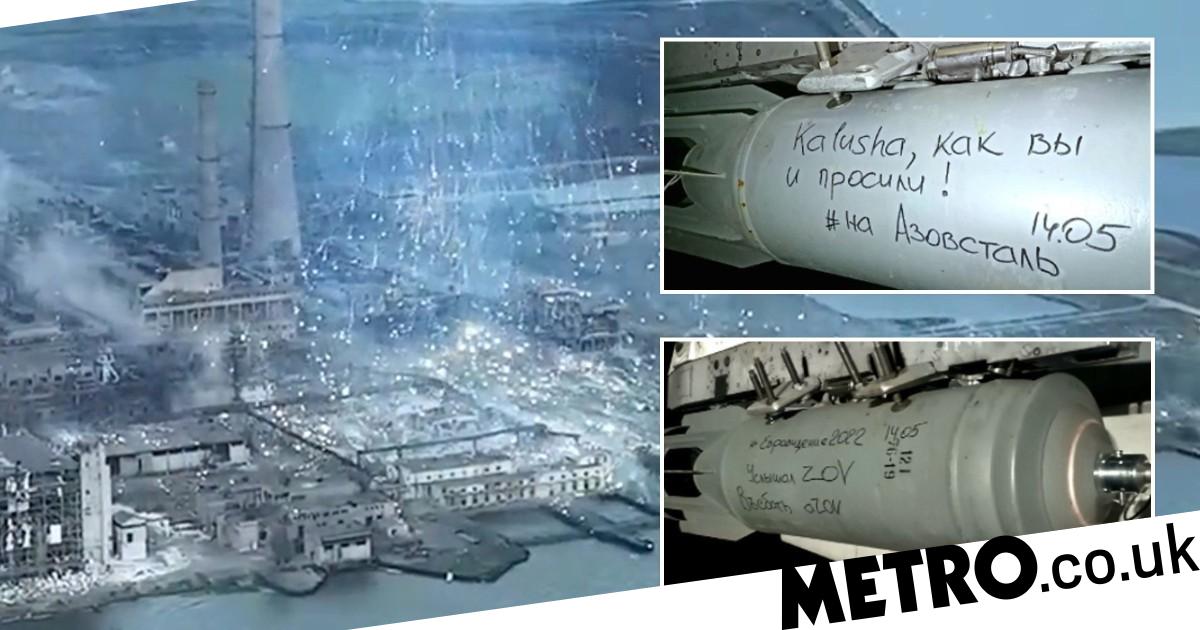 Bombs scrawled with twisted quotes from Ukraine’s Eurovision performance have reportedly been dropped on Mariupol.

Kalush Orchestra won the contest with the song Stefania, which has become a popular anthem among Ukrainians in recent weeks.

During last night’s performance, the band made an impassioned plea for the world to ‘help Maripoul’ and ‘help Azovstal now’.

Frontman Oleh Psiuk added: ‘I ask all of you, please help Ukraine.’

Mariupol is almost entirely in Russian hands, except for a few hundred Ukrainian fighters who continue to hold out in the Azovstal steel factory.

Today, images emerged of bombs destined for the city, which had been scrawled upon by Russian soldiers.

Soldiers have reportedly claimed they are doing ‘as asked’ by the Kalush Orchestra.

Other images shared on messaging app Telegram show bombs with ‘Eurovision2022’ mockingly written on the side.

Petr Andryushchenko, adviser to the mayor of Mariupol, shared the images of the Russian bombs on his own Telegram channel.

He said Putin’s forces had ‘lost their humanity’.

And online, pro-Kremlin writers outraged at Ukraine’s win have branded Eurovision ‘a freak show’ and ‘all fake.

One Russian journalist even ‘joked’ the contest should have been bombed with a ‘Satan’ missile.

He said: ‘Our courage impresses the world, our music conquers Europe.

‘Next year, Ukraine will host Eurovision.’

Mariupol, a shell of the city it once was, is almost entirely under Russian control and the steelworks face repeated attacks.

Just this morning, unverified video emerged of phosphorus bombs falling over the site.

A number of ‘sparks’ – made of up of individual munitions – can be seen going off in the clip.

Petro Andriushchenko, advisor to Mariupol’s mayor, said specialists will assess the area to determine the nature of the attack.

Soldiers in the steelworks, hidden within its maze of tunnels, used last night’s Eurovision win as a much-needed morale boost.

They posted on Telegram: ‘Thank you to Kalush Orchestra for your support! Glory to Ukraine!’

Band members will return to Ukraine on Monday after being given special permission to leave the country to attend the competition.

In a recent update, Mr Zelensky said Ukraine’s forces have made progress in the east, retaking six towns or villages in the past day.

And Ukraine has ‘likely won the battle of Kharkiv’, analysts say, as Russian troops continue to withdraw from the country’s second-largest city.

In his nightly address on Saturday, Mr Zelensky said ‘the situation in Donbas remains very difficult’ and Russian troops are ‘still trying to come out at least somewhat victorious”.

But he added: ‘Step by step, we are forcing the occupants to leave the Ukrainian land.’

Michael Che on controversial comedy: “As long as people are talking it’s not all that bad.”

What sportsbooks are projecting for Celtics-Bucks Game 7