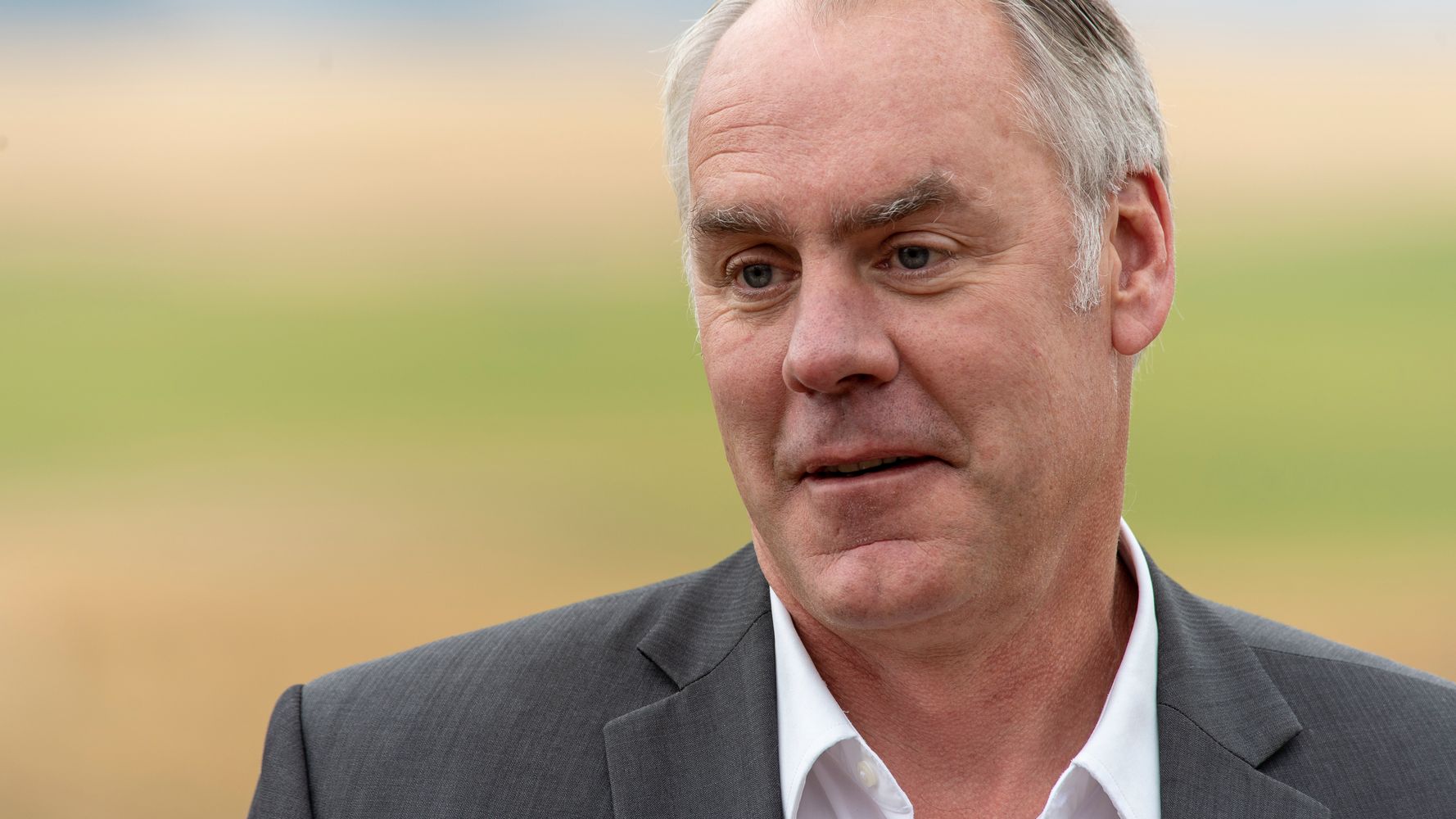 Ryan Zinke seemingly had it all: President Donald Trump’s “full endorsement,” name recognition and political clout at home, and lots and lots of campaign cash.

The former Navy SEAL, congressman and Trump administration interior secretary was widely expected to cruise to victory in the Republican primary for Montana’s new House seat on Tuesday. Instead he floundered, barely eking out a win over Al Olszewski, a former state senator and hard-line conservative who painted Zinke as a self-serving liberal who “quit” Trump.

The Associated Press called the race for Zinke late Thursday after a delay in Lincoln Country. Zinke defeated Olszewski by just over 1,600 votes, or 1.9 percentage points.

In a statement, Zinke thanked voters for their “confidence that America can be fixed and for ignoring the political BS.”

Zinke’s unimpressive performance sets the stage for what could prove to be a competitive midterm race as Republicans look to regain the majority in the House.

“Logic would say the District 1 seat may be more in play during the general election,” said Chuck Johnson, a retired journalist who covered Montana politics for more than four decades. “It likely will be one of the most-watched House races nationally.”

But Johnson stressed there are many factors — campaign messaging and tactics, fundraising and dark-money influence, and the extent to which national party committees get involved, if at all — that will determine just how tight things get.

Montana’s new House district, which covers the western part of the state, was created last year to account for population growth in Big Sky Country. It is the first time Montana has had two House seats since 1993.

When western Montanans head to the polls in November, they will be faced with two very different choices. Zinke, the muscle of Trump’s fossil fuel-centric “energy dominance” agenda who has made a small fortune consulting for oil, gas and mining interests since resigning under a cloud of scandal in early 2019, will square off against Monica Tranel, a rancher, two-time Olympic rower and environmental lawyer who successfully helped sue Northwest Energy over a 2007 Montana law that gave the utility giant pre-approval to construct energy projects.

Tranel trounced the Democratic field on Tuesday — a race that many longtime political observers in Montana expected to be the more competitive of the primaries.

In a statement after her win, Tranel took a swing at her expected GOP opponent, saying that Democrats and Republicans alike made clear on Tuesday that “they want a representative in Congress to represent them, rather than corporations that exploit them.”

“Ryan Zinke had multiple chances to show up for Montanans, but instead of serving Montana, he served himself,” she said. “Zinke’s record of corruption has contributed to a primary result that shows his own party does not trust him.”

Zinke was one of five candidates on the Republican ticket Tuesday. He campaigned as if he was a shoo-in for the Republican nomination, given his Trump credentials and previous stint as Montana’s at-large House member. He largely avoided talking to the press, with the exception of right-wing outlets, and did not show up for a single primary candidate forum, including one last month in his hometown of Whitefish. Through mid-May, he had raised nearly $3 million, far more than any other candidate in the race, and outspent everyone in the field by 2-to-1 or more.

In the end, nearly 60% of Republican voters ultimately cast their ballot for someone other than Zinke. Many of those votes will be up for grabs in November.

Even more notable, Zinke got walloped in his home county of Flathead, tallying just 31.5% of the vote to Olszewski’s 47.8%, according to the latest returns.

“He is wounded, for sure. He’s vulnerable,” said Evan Barrett, a longtime Democratic policy and economic adviser in Montana who is now assisting with Tranel’s campaign. “I think that, obviously, the positives that come with being a high-level person in the Trump administration appear to be offset by the negatives that come with the ethical lapses that have been widely publicized.”

There are signs that Zinke’s camp knew it might be in trouble. In March and April, his campaign paid a public opinion research firm more than $50,000 to conduct voter surveys, expenditures show. And in the three days before the primary, western Montana voters received text messages that attacked Olszewski as “the wrong choice for Montana Conservatives,” according to copies of the texts a Montana resident shared with HuffPost.

One of the texts included a pre-recorded voice memo from Donald Trump Jr.

The text message ads were paid for by More Jobs, Less Government, a super PAC with ties to both Zinke and Sen. Steve Daines (R-Mont.). Daines also endorsed Zinke in the Montana House race.

Foley, his wife and other Fidelity National employees have so far donated a combined $27,450 to Zinke’s current congressional bid, Federal Election Commission records show. That’s on top of the nearly $200,000 that employees and political action committees affiliated with the company reportedly contributed to Zinke’s previous two congressional campaigns.

Zinke is best known as a face of Trump-era swampiness and corruption. He played an outsize role in advancing the Trump administration’s pro-fossil fuel, anti-environmental agenda and racked up nearly 20 federal investigations into his conduct and policy decisions. One of those probes targeted his use of private planes at taxpayers’ expense, including when he and staffers chartered an oil company plane for a flight from Las Vegas to Montana. That flight, which cost more than $12,000, followed a “motivational speech” Zinke gave to the Vegas Golden Knights.

The scandals ultimately caught up with him, and he resigned as interior chief in January 2019 — one day before Democrats took control of the House and the oversight authority that comes with it.

Zinke has repeatedly dismissed the internal probes against him as “politically motivated attacks” and falsely claimed that he was cleared of all wrongdoing. And on the campaign trail in recent months, he all but promised to get revenge if elected and if Republicans take back the majority in the House of Representatives in November.

“I think we need to hold people accountable, particularly in the Biden administration. It seems there is a lot there between Hunter Biden and the president himself,” Zinke told right-wing outlet Newsmax earlier this week. “I think we need to investigate some egregious acts, but I would say be [judicious] in our investigation and not abuse the power … Just because the other team lies, cheats and steals, we should not bow to that bait.”

Interior’s internal watchdog concluded in a report in February that Zinke had violated ethics rules and misused his office through his continued involvement in a real estate project in his hometown of Whitefish, Montana, and then lied to investigators about it.

Following his departure from the Trump administration, Zinke cashed in with the fossil fuel interests he’d spent two years regulating. A financial disclosure his campaign filed in November, months after it was due, revealed that Zinke was paid a combined $1.36 million for consulting and other services in the two years after leaving the Trump administration. That included $460,000 from oil giant ConocoPhillips, $135,000 from U.S. Gold Corp. and at least $5,000 each from several other fossil fuel interests. A good chunk of that income flowed in while Zinke was on the campaign trail railing against President Joe Biden for high gas prices, peddling industry talking points and touting his energy bona fides.

Zinke’s industry ties, ethical shortfalls and ties to California — Politico reported last month that his wife designated a home she inherited in Santa Barbara, California, as her primary residence — took center stage in the primary. In a campaign ad released late last month, Olszewski highlighted several of Zinke’s scandals while at the Interior Department and declared that “flying high on the taxpayer dime isn’t cowboy, it’s California.”

Those same issues will no doubt be fodder for attack ads in the coming months.

As HuffPost reported this week, in the course of Zinke’s 14-year political career, he has shifted from a moderate, conservation-minded Republican to a hard-line conservative handcuffed to Trumpian ideology. When Newsmax asked Zinke earlier this month about the importance of Trump’s endorsement, he said the former president is “either going to be a king or a kingmaker.” And he dismissed Olszewski’s claim that he’s too liberal to represent Montana.

“I don’t think President Trump endorses RINOs,” he said, referring to so-called “Republicans in name only.”

Zinke still heads into the general election as the favorite. More than 26,000 more votes were cast in the Republican primary than in the Democratic primary for the western district. FiveThirtyEight.com gave Republicans a 10-point advantage to win the seat in November.

In 2020, Trump won Montana by 16 points and Democrats lost every single statewide race.

“While Democrats are united around Monica Tranel and already gearing up for November, the Republicans start the race off in disarray,” Shelia Hogan, executive director of the Montana Democratic Party, said in a statement Wednesday when the race was still too close to call.

Jayson O’Neill, a conservation consultant and former aide to former Democratic Montana Gov. Brian Schweitzer, said the primary revealed a schism among Republican voters in western Montana. He expects the results this week could bump the race to one of the top House battles of the midterms.

The Democratic Congressional Campaign Committee maintains a “Districts in Play” list; Montana’s new House district is not currently on it, but some anticipate the committee could come to see the new Montana House seat as an opportunity.

“It’s a big referendum that says people are fed up with Zinke, and they are willing to vote for pretty much anybody else,” O’Neil said.