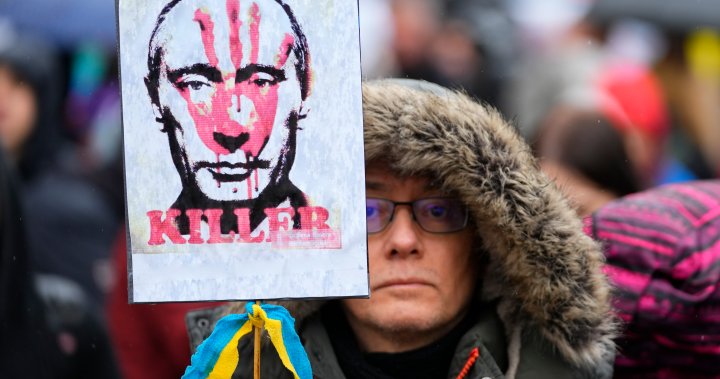 Targeting sanctions at the inner circle of Russian President Vladimir Putin is “key” to raising the pressure and exacerbating splits among his supporters over the war in Ukraine, says a former spokesperson for Alexei Navalny.

Anna Veduta is now vice-president of the anti-corruption foundation created by Navalny – the jailed Russian opposition leader. She told The West Block guest host David Akin that Russians are feeling the impact of Western sanctions laid over Putin’s unprovoked and bloody invasion of Ukraine, but that continuing them and targeting his allies closely is vital.

On Tuesday, the Canadian government announced sanctions against the two adult daughters of Putin as well as 12 other “close associates of the Russian regime.”

The two daughters are suspected to be hiding their father’s wealth.

That followed a similar move by the United States on April 6, and comes after successive rounds of sanctions since the invasion began on Feb. 24.

If Russia’s atrocities are genocide, world leaders have a duty to act. Will they?

Those rounds have targeted roughly 750 individuals from Russia, Ukraine and Belarus in an effort to impose steep economic and political costs on Putin for the invasion, which shattered international laws and has led to scores of Ukrainians killed in violence increasingly being described as war crimes.

Prime Minister Justin Trudeau suggested as much during a press conference last week, and has said it is “absolutely right” to consider whether Russian violence constitutes genocide under international law.

Veduta said Navalny, who is currently a political prisoner in Russia for opposing Putin, is urging an escalation in the campaign to get accurate information to the people inside Russia about what is going on. Putin severely limited access to information that is not propaganda following the invasion.

9:07
Russian unrest during war and the impact on Putin’s leadership

Russian unrest during war and the impact on Putin’s leadership – Mar 17, 2022

As a result, there are growing questions about whether the scale of reported deaths of Russian men killed during attacks on Ukraine are known by their families and fellow citizens.

“There is this demand for the truth in Russia,” Veduta said. “People are trying to find it.”

Navalny has called for the West to buy up advertising placements on the websites that are still allowed in Russia, including YouTube, so that those ads can display accurate information about the butchery and horrors carried out at Putin’s orders.

Dissent in Russia carries steep consequences, but there is still an appetite for the truth, Veduta said.

“Even with these high risks, a lot of people in Russia are still trying to protest this war,” she said. “Every attempt to convey the truth, every attempt to show the real picture of what is going on must be supported.”

2:44
Russian police detain hundreds at anti-war protests across the country

Ryan’s World: How a kid in Hawaii became a YouTube millionaire