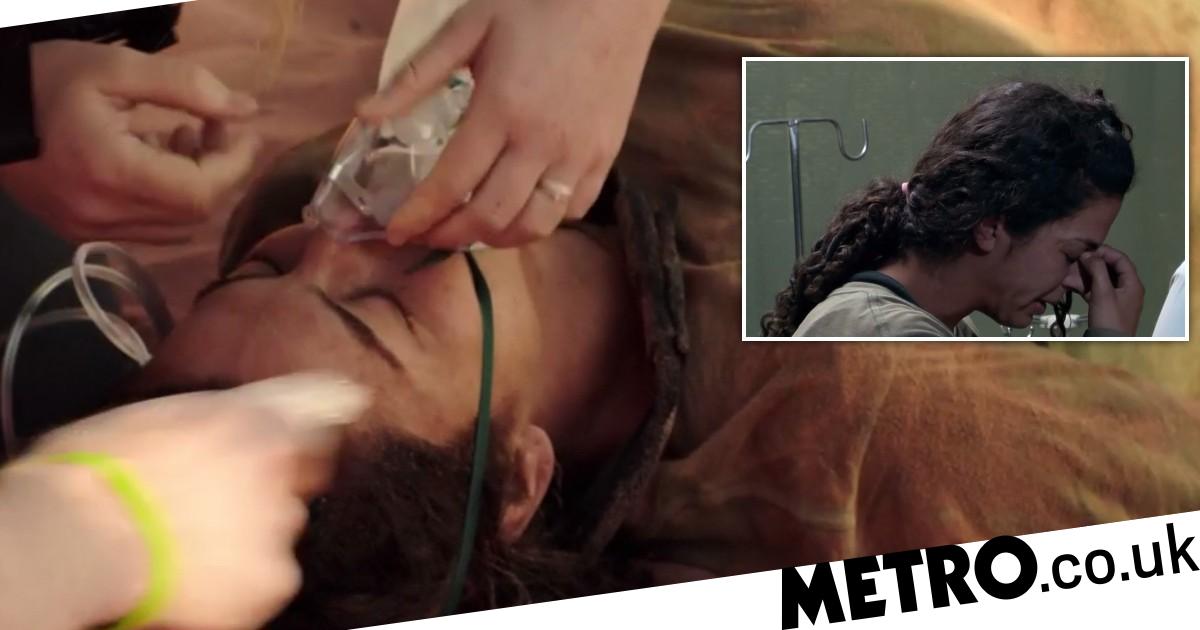 SAS: Who Dares Wins once again proved it’s the toughest show on TV after recruit Pahrnia had to give up her armband following an intense game of murderball.

Tonight’s show saw the recruits whittled down even further as they faced the wrath of the heat of the Jordanian desert.

From racing up and down sand dunes to climbing the tricky rocky terrain, several competitors threw in the towel in Sunday’s episode.

However, one person who didn’t leave by choice was Pahrnia, who was one of the frontrunners of the process.

Towards the end of tonight’s instalment, the recruits had to take on the savage game of murderball, which saw them have to battle with a tyre and try to get to their own team’s end.

But Number 17 took a massive hit when she was knocked to the ground by a fellow recruit, leaving her needing oxygen after she temporarily lost consciousness.

She was taken to the medic Solia, who assessed her condition: ‘I want you to look at my finger and keep your head still.’

Directing staff member Rudy Reyes came into check before Solia quickly delivered her verdict, upon the fact Pahrnia had blacked out.

‘People witnessed you having a loss of consciousness. With that in mind, I’m going to have to medically withdraw you,’ she announced.

‘No, no, no, please let me have a say on this,’ she pleaded before the medic noted: ‘You lost consciousness, we cannot risk you.’

Rudy reminded her: ’A brain and nervous system… it can be fatal, we do have more violence ahead on this course – do you understand?’

‘I get it, I get it,’ Pahrnia said, reluctantly giving in. ‘It has to be the call,’ added the DS.

Fans were just as gutted for the recruit, who had been viewed as one of the strongest in the contest so far.

Taking to Twitter, one wrote: ’17 getting medically removed from the course is hard breaking. She was the front runner of this episode🥺 #SASWhoDaresWins.’

‘It’s such a shame that 17 has been withdrawn. She had so much potential. #SASWhoDaresWins,’ agreed a fan.

A viewer praised the decision, and added: ‘Great message tonight on #SASWhoDaresWins When it comes to Brain Injuries never risk it. #IfInDoubtSitThemOut Great effort No 17 👏👏 So much to learn from this short clip.’

‘Gutted for Parnhia #17 she was an amazing recruit, she leaves with her head held high and the respect of the DS #SASWhoDaresWins,’ said someone else.

Another commented: ‘That’s a real shame but gotta do right by #17  Not worth it.  Respect to her as one of the strongest individuals 👏#SASWhoDaresWins.’

But who will make it through the brutal challenges next weekend has to offer?

SAS: Who Dares Wins continues next Sunday at 9pm on Channel 4.


MORE : Safiyya Vorajee says it ‘doesn’t get any easier’ as she commemorates one-year anniversary of daughter Azaylia’s death: ‘I will hold you in my heart’