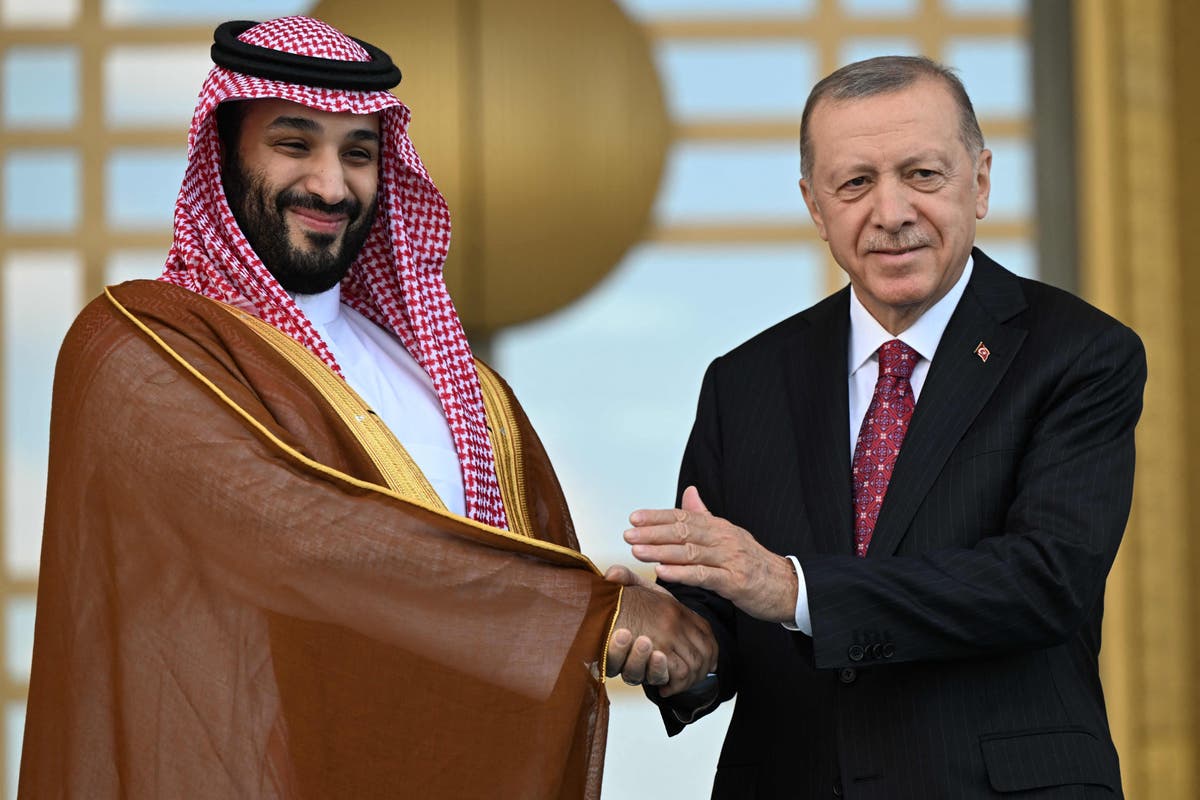 Before the ascent of Crown Prince Mohammed bin Salman, before the various rifts in the Middle East exploded to the forefront, there was a budding golden period of relations between Turkey and Saudi Arabia.

In April 2016, Saudi King Salman visited Turkey and was afforded pomp and ceremonious splendour that was extravagant even by the glitzy standards of the Middle East, as the two new nations edged towards a powerful partnership as regional military and economic hegemons.

Now, after six years of recrimination, blockades, boycotts, and proxy wars – all of it shadowed by the brutal 2018 murder of dissident Saudi journalist Jamal Khashoggi – the two nations appear to be back on the path towards partnership.

On Wednesday, Prince Mohammed visited Turkish President Erdogan in Ankara, the first full state visit by a Saudi leader to Turkey in more than six years, and the highest level visit by a Riyadh official since Mr Khashoggi’s killing.

The 36-year-old was met by Mr Erdogan at the main entrance of the presidential complex in Ankara with a 21-gun salute and blue-uniformed guards on horseback carrying the green flag of Saudi Arabia and the red flag of Turkey.

Prince Mohammed smiled as he embraced Mr Erdogan, a far cry from comments he reportedly made in 2018 in which described Turkey as part of a “triangle of evil” that included Iran and hardline Islamist groups.

According to a joint statement issued Wednesday evening just before Prince Mohammed left the country, Turkey and Saudi Arabia agreed to bolster trade across a broad range of sectors, including tourism, real estate, transport, agriculture, high-tech and healthcare, as well as in key energy and petrochemical fields.

The crown prince’s visit came a day before Ben Wallace, the secretary for defence, and foreign secretary Liz Truss visit Ankara for security talks. Turkey is contemplating the purchase of Eurofighter Typhoon warplanes produced by a British, German, Spanish and Italian consortium.

The de facto ruler of Saudi Arabia and heir to the kingdom’s throne and oil riches arrived in Ankara after visits to Egypt and Jordan. The visit to the Turkish capital included a full state dinner and a private 90-minute tete-a-tete between the two leaders.

In keeping with Prince Mohammed’s apparent disdain for journalists, there was no joint press conference.

Saudi Arabia was reportedly to pen a $10bn (£8.1bn) currency swap deal with Turkey to bolster Ankara’s reserves, in addition to announcing investments in the health, energy, food, defence, tourism and real estate sectors, according to news reports.

For both countries, friendly ties mean more commerce and influence at a time when the United States is continuing along a years-long path towards extricating itself from the Middle East.

“There are new openings,” said Guven Sak, an economist who leads Tepav, a think tank.  “A new situation is emerging.”

That new reality includes the Abraham Accords, a series of US-backed diplomatic deals binding some Arab countries to Israel without taking Palestinians concerns into account.

It also includes a US reversal on Saudi Arabia. The administration of President Joe Biden originally vowed to keep a distance from Saudi over its human rights abuses and its war in Yemen. But it has now changed course, and Mr Biden is to visit Riyadh next month to pay his respects to King Salman and his heir.

It follows rapprochements between Saudi Arabia and Qatar, a staunch partner of Turkey, as well as cooling of tensions over Libya between Ankara and the United Arab Emirates, a partner of Riyadh.

Regional powers see an emerging new economic and security order in the Middle East and other regional actors, with lucrative new energy and transport connections meant to circumvent Russia and the Ukraine war, and are scrambling to be part of it, or at least not be excluded from it.

“With the Israeli innovation capacity, with the Turkish manufacturing hub and with the capital in the Gulf it is possible to diversify their economies,” he said.

More immediately, Turks speak of the potential for Saudi investment in the country’s ailing economy, which is suffering from record-high inflation and stagnant wages, as well as access to cheap energy in exchange for providing Riyadh with security arrangements. Saudi Arabia sees a chance to bolster the kingdom’s stature as a regional diplomatic force, with the Mr Khashoggi matter behind it.

“When it comes to Saudi Arabia, we had good relations in the past and these good relations were overshadowed by the Mr Khashoggi case,” said Mr Sak. Already strained relations between Saudi Arabia and Turkey plummeted to nadir after the October 2018 abduction, torture, murder and dismemberment of The Washington Post journalist Mr Khashoggi in the Saudi consulate in Istanbul at the hands of a 15-man kill team that included members of Prince Mohammed’s personal entourage.

As Turkey upped pressure on Riyadh over the murder, Saudi Arabia imposed a boycott on Turkish goods, a restriction that was lifted after the Turkish judiciary suspended its investigation into the Mr Khashoggi killing. Authorities reassigned the Istanbul judge who had opposed the decision to a remote province just days before the crown prince’s visit.

Some Turks are having a hard time swallowing the new relationship with Saudi Arabia. “God willing, [Prince Mohammed] will loosen his purse strings a little and bless us with dollars and loans,” columnist Emin Colasan wrote in the Turkish newspaper Sozcu on Tuesday. “But if I were [Erdogan] I would ask him: ‘You killed your own citizen at your consulate building in Istanbul. Well, were you ever ashamed? What did you do with the killers?’’