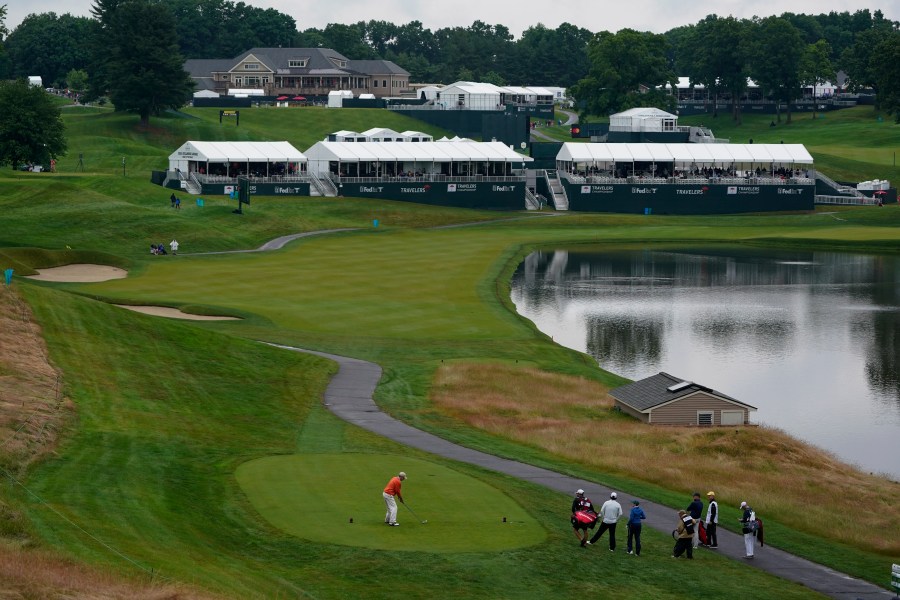 CROMWELL, Conn. (AP) — It has been an exhausting couple of weeks for the top players on the PGA Tour as they’ve dealt with the usual rigors of a U.S. Open and the unusual stress of losing some big names to the upstart LIV Golf series.

But six of the world’s top 15 ranked players, including No. 1 Scottie Scheffler and No. 2 Rory McIlroy still managed to make the short trip from Brookline, Massachusetts, to Connecticut to play in the Travelers Championship.

McIlroy, who won the Canadian Open two weeks ago and then tied for fifth in the U.S. Open, is playing for the fourth straight week. He’s hoping to keep up the momentum that has seen him rise to his highest ranking since July, 2020, but said he’s feeling both physical and mental fatigue.

“Four weeks in a row is pretty rare for me these days,” the four-time major winner said. “I haven’t played four in a row in a while and you start to remember why.”

Scheffler is playing for a third consecutive week and fourth in the last five. The Masters champion has nine top-10 finishes in 19 starts, including major runner-up showings at Brookline and in May at Colonial.

He acknowledged it would have been an easy time to take a break.

“I like to be a man of my word, and so this would be another event where playing the week after a major is not necessarily easy, especially when you’re in contention,” he said. “ But for me, I’ve, I committed to this event, and I want to be here.”

McIlroy said its important to many top PGA Tour pros to play events like the Travelers, if for nothing else than to support the community of fans those tournaments have built.

“You look at somewhere like Dublin, Ohio,” he said. “ I mean, (Jack Nicklaus) basically built a town around a golf tournament. So when you think about PGA Tour events and what they can do for communities this is a good example, Memorial’s a good example, and obviously a number of others.”

The potential for a showdown between the game’s top ranked players also is important for the tournament, which has had a couple of big names drop out.

Those include Justin Thomas, who withdrew Wednesday to rest an ailing back, and Brooks Koepka, who earlier this week became the latest player to defect to LIV Golf. He plans to play next week in Portland, Oregon, the first LIV event in the United States.

But the allure of the PGA Tour still means something to golfers such as 11-year veteran Harris English, who won last year’s tournament in Connecticut by besting Kramer Hickok in an eigh-hole playoff and will defend that title this week.

“Still have to pinch myself every day that I’m playing on the PGA against the best players in the world,” he said. So I enjoy it out here and like I said, with winning that tournament last year, looking at the names on that trophy, that means more to me than anything. Having my name on a trophy with Lee Trevino, Arnold Palmer, you can go down a list of everybody that’s won this tournament. You can’t take that away from me now, my name’s going to be on that trophy for years and years and it’s something I’ll never forget.”