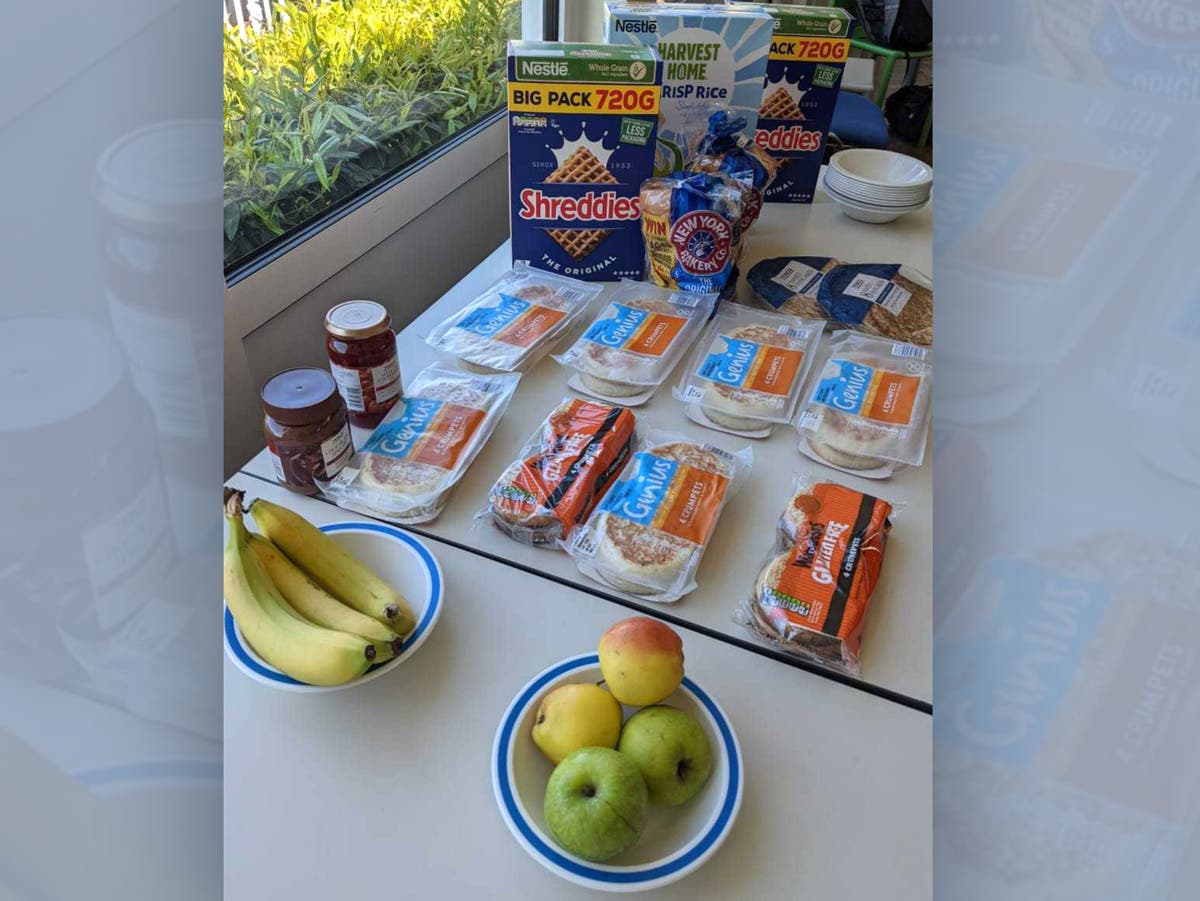 Schools have started giving free breakfasts to all students taking exams to support the rising number of families struggling with the cost of living crisis.

Headteachers told The Independent they have gone “over and above” this year by expanding free food offerings – usually only available for disadvantaged pupils – to cover all those taking GCSE and A-levels.

It comes as the rising cost of living is stretching household budgets forcing more people to turn to food banks and amid calls for the eligibility critera for free school meals to be relaxed to help more families in need – a move the government has dismissed.

Headteachers said they were offering free breakfasts to pupils taking exams for the first time to ensure no one falls through the cracks.

Pepe Di Iasio, who leads a secondary school outside Sheffield, said children potentially going into high-stake exams hungry was “certainly a worry” at the moment.

This year, free breakfasts have been offered to everyone taking tests that day.

“What has been really appreciated by the students is having the opportunity to have a really good breakfast, a really healthy start to the day,” the Wales High School headteacher said.

The breakfast club, which also sees students go over their final preparations for the exams, had previously only been offered to disadvantaged students.

“We’ve gone over and above this year,” Mr Di Iasio said.

He added: “We call it a warm-up and it’s just literally preparing for the exam so we know they’re good to go before the papers are out and before they go to the exam hall.”

In Hertfordshire, the same thing is happening at Adeyfield Academy. For the first time, all children taking their GCSE and A-levels can get a free breakfast beforehand.

Dawn Mason, its principal, told The Independent this includes “all the kinds of brain power that you would hope students would have before going into a big exam”.

The school in Hemel Hempstead sits in an area of relatively high deprivation, with an estimated 56 per cent of Year 1 students eligible for free school meals, according to its leaders.

It recently carried out research to find out how families are coping with school-related costs.

“We realised there’s probably a lot more students that are going under the radar that don’t officially fall into this category,” its vice principal Selma Riley said.

To ensure no one falls through the cracks while taking important exams, Adeyfield Academy is putting on pancakes, cereal, bagels and fruit in school for these students – as well as a “pep talk” by a subject teacher.

“We just needed to do everything we could to give them the best chance and think about those marginal gains,” Ms Riley said.

Even before the cost-of-living crisis escalated, poorer pupils were generally further behind on learning than their better-off peers after being hit the hardest academically by disruption to education in the Covid pandemic.

This could end up driving a “step change” decline in social mobility, according to a Sutton Trust report released on Wednesday.

Ms Mason, the Adeyfield Academy principal, said: “We just want to go the extra mile, particularly in light of where we are nationally.”

An Academies Enterprise Trust spokesperson told The Independent most of its 20 secondary schools across England were also putting on porridge, toast and bananas for pupils taking exams this year.

“For many of our schools, this is something they have done in previous years, but for others this is the first time in recognition of the challenges that students have faced post pandemic, and the reality that some of our families are facing in terms of making ends meet,” they said.

In Oxfordshire, Sam Baker said his secondary school has been doing pre-exam breakfasts for years. But this time around, it has been the highest turnout to date.

“It’s been the biggest group and we’re definitely having no leftovers at the end,” The Copper School’s assistant headteacher told The Independent.

He added:“We know that there will be families who are just about managing and actually having the opportunity to get a good protein-filled tasty breakfast in the morning is appreciated.”

A government spokesperson said: “A nutritious breakfast at the start of the day can help a pupils’ attainment and behaviour. Our National School Breakfast Programme, backed by up to £24m for two years, is helping children in disadvantaged areas start the day with a healthy meal.

“We encourage all schools to use their increased core schools and recovery funding to help children and young people according to their needs, including with breakfast clubs.”

All You Need to Know About the Fat Removal Surgery