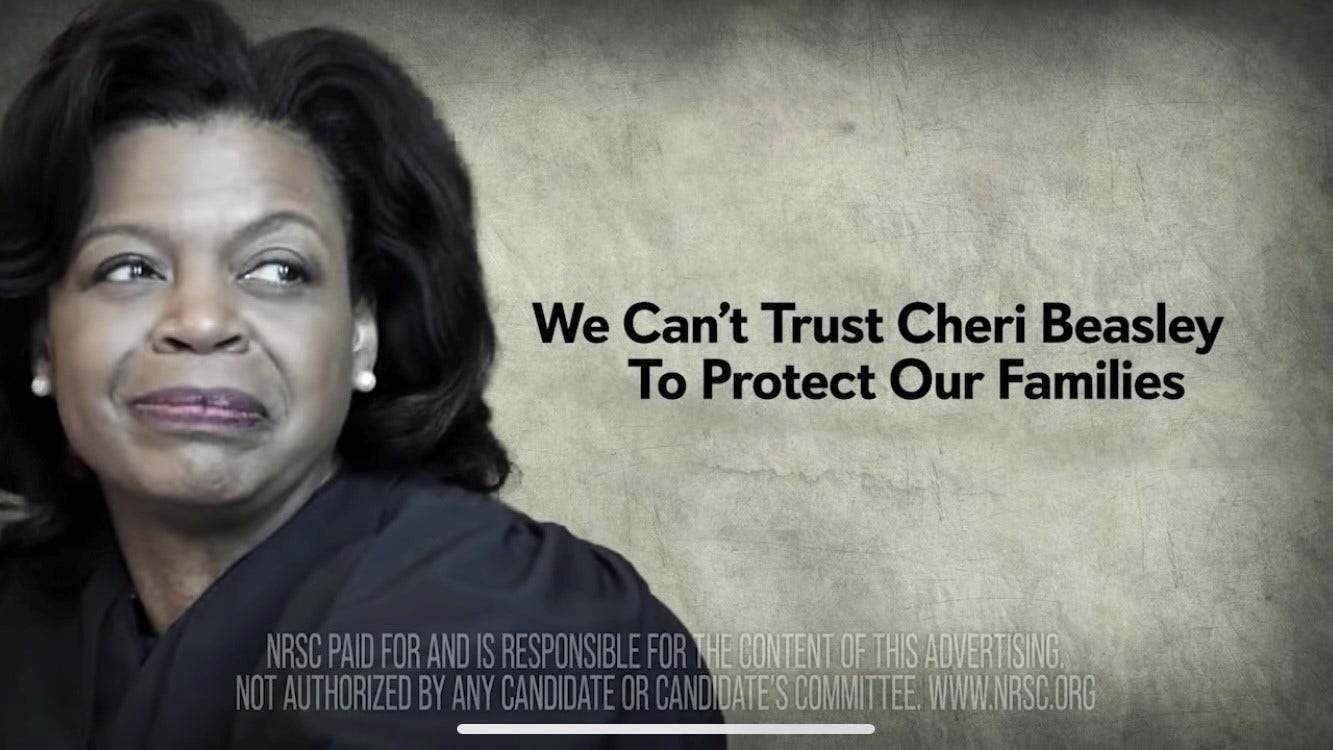 The former state Supreme Court chief justice highlighted in a recent ad that during her tenure she helped to create North Carolina’s first human trafficking court and pledged, “in the Senate I’ll never stop fighting to make North Carolina safe”

But a new TV commercial from the independent expenditure wing of the Senate GOP’s reelection committee that starts running Tuesday says that “our children are society’s most vulnerable” and argues that “Chief Justice Cheri Beasley has failed them.”

The NRSC, which shared the spot first with Fox News Digital Tuesday, says it’s spending $1.83 million to run the ad for two weeks on TV and digital.

Referring to a state Supreme Court ruling in which Beasley wrote the majority opinion, the narrator in the commercial mentions “a predator who sexually assaulted a seven-year-old girl. Beasley threw out the indictment.”

The ad refers to State v. White, in which a 7-year-old girl was sexually molested while she and her mother were living in a trailer owned by Michael Lee White, who was in 2015 sentenced to up to 369 months in jail after confessing.

The state Supreme Court was asked to decide whether there was a problem regarding White’s indictment due to the girl being identified as “Victim 1” instead of using her initials or first name. The court ruled that state law was “clear and unambiguous” and that the child needed to be identified beyond being named “Victim 1.”

The case was spotlighted in a previous NRSC ad that took aim at Beasley earlier this month.

At the time, the Beasley campaign released a joint statement from six county sheriffs that called the ad “disgraceful and horrible.”

“Cheri took an oath to uphold our Constitution and follow the rule of law, and she partnered with us to protect communities and hold violent offenders accountable,” the sheriffs wrote. “Having spent decades keeping North Carolina communities safe, we know that North Carolinians can trust Cheri to protect our communities and stand up for victims, just like she always has.”

But the candidate’s campaign earlier this month told WNCN in North Carolina that Beasley’s rulings were upheld more than 98% of the time and that the Supreme Court of the United States agreed with Beasley when it reviewed five of her rulings.

The Senate contest in North Carolina, a key general election battleground state that former President Donald Trump narrowly won in 2020, is a race to succeed retiring GOP Sen. Richard Burr and is one of a handful of showdowns across the country that will determine if Republicans win back the Senate majority in November’s midterms elections.

Ted Budd, who is running for U.S. Senate, joins the stage with former U.S. President Donald Trump during a rally at The Farm at 95 on April 9, 2022, in Selma, North Carolina.
(Photo by Allison Joyce/Getty Images)

Democrats in North Carolina coalesced around Beasley – who served as a state Supreme Court associate justice from 2012 to 2019 and as chief justice for a year and a half before losing election to a full term – and she easily crushed two lesser-known candidates in the May 17 primary.

Beasley will face off in November with conservative Rep. Ted Budd. The three-term congressman – with the endorsement and support of Trump – defeated former GOP Gov. Pat McCrory by a nearly two-to-one margin in the Republican primary, with former Rep. Mark Walker in the single digits.