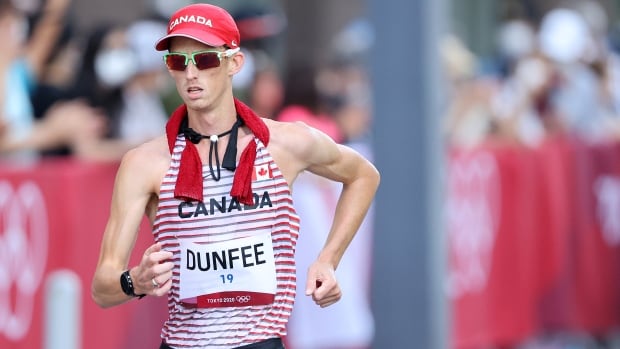 Just hours before competing in the 20-kilometre race walk event at his 10th national championship, the usually confident Evan Dunfee had a little bit of doubt in his voice.

“I’ve been dealing with some injury stuff,” he told CBC Sports, trying to find the words to describe how he was feeling going into the race. “The body is being put back together. Twenty kilometres is a long way.”

Dunfee is one of hundreds of athletes in Langley, B.C., taking part in the national championships — a crucial qualification event for the world championships coming up in Eugene, Oregon next month. It begins with the race walk events on Wednesday evening.

“I’m a little bit nervous because this will be a telling step. The physical meeting the mental part,” Dunfee said. “It is a test. It’s a necessary thing to see where I’m at. It’s just daunting knowing that the answer to that question might not be to my liking.”

It’s been a topsy-turvy year for the Richmond, B.C. athlete in a sport often overlooked. Last summer he had his moment in the sun by winning bronze at the Tokyo Olympics in the 50km event.

But it was a bittersweet achievement as it came the same year it was announced the event would be removed from the Olympic programme going forward.

In the weeks and months following his medal moment in Tokyo, there was some darkness for Dunfee. Plagued by a hamstring injury and lacking motivation with his marquee event removed from the Games, it’s been a tough grind for the 31-year-old who’s never been afraid to stare down a challenge.

“The last 10 months have been a real struggle trying to find my identity a little bit and mourn the loss of the 50km event,” Dunfee said. “I think my best years were ahead of me in the 50. It wasn’t one of those things where I felt I was entering my prime. And dealing with the injury was mentally really tough on me.”

That injury forced him to miss an event in Spain recently, but in the time since then he’s worked closely with his team and physiotherapist to try and get his body ready for a summer of competition. And it seems to be working.

Things seem to be trending in the right direction.

“I’m pretty happy these days to be honest. It’s been a struggle. But sitting here today I feel content with where my life is going. Cautiously optimistic about the future,” Dunfee said.

He hopes that future includes being a member of Richmond’s city council. He’s running for election this fall and believes he has a realistic shot at winning.

“I don’t think anyone is going to out-doorknock me,” Dunfee said, only partially joking. “I hope I can win. I think I have ideas that will resonate with people once I get the opportunity to share those ideas. I joke about the doorknocking, but I can’t wait to get to people’s doors and share my vision.”

I don’t think anyone is going to out-doorknock me.– Evan Dunfee on potential political career

Before getting serious about his campaign, Dunfee will compete at both the world championships and Commonwealth Games this summer for Canada.

He hints that the end of his race-walking career might be drawing near.

“I’m certainly going to keep going after this year because I know I haven’t been able to get the most out of my body this season. I don’t want to end on those terms,” Dunfee said. “And then the following year [are the Paris Olympics.] It seems silly to finish before that.

“I think I’ll try and finish off this cycle but some of it does depend on how the election on Oct. 15 goes. I think so much of it depends on where my life trajectory goes this fall. I don’t want to be doing this if I don’t love it. That’s the deal I’ve made with myself.”

Dunfee is mostly inspired by family, friends and students he gets to share his story with in schools these days.

As he continued his preparations before his 20-kilometre event Wednesday, he looked at 1,700 cards he autographed that he’ll be taking to students in the coming days and weeks — a reminder of his journey and what sport has offered him throughout his life.

“I didn’t realize how much my motivation to train was tied to being able to be in my community,” he said. “In Rio, when I was closing in and trying to get third, the motivation was from telling myself to take one more step. It was very internal. In Tokyo, my motivation was thinking of all my family and friends who were walking with me. That’s such a perfect microcosm for where I’m heading.”

Where Can Judge Break the AL Home Record? A Look at the Remaining 7 Games for NYY –…