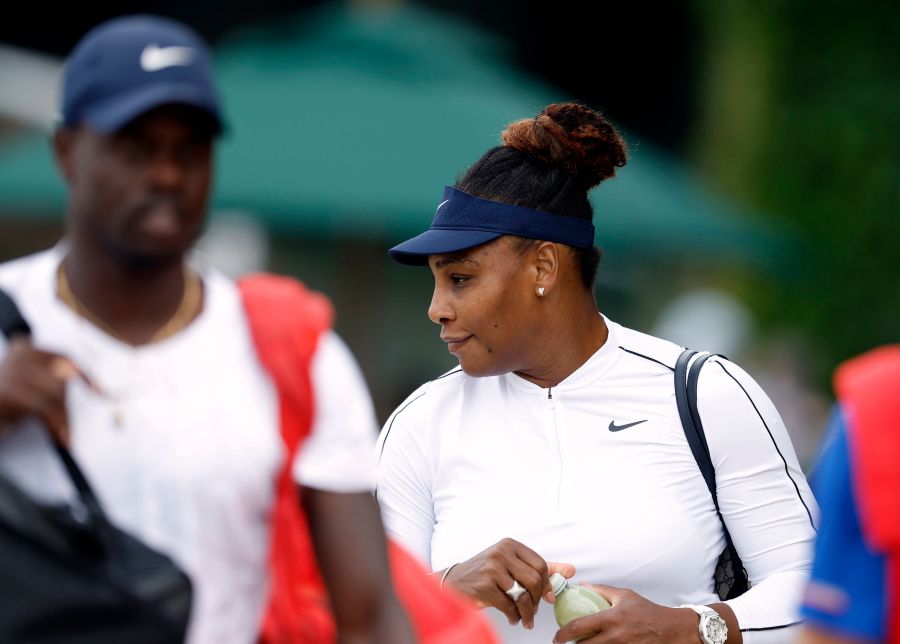 WIMBLEDON, England (AP) — Serena Williams will begin her Wimbledon comeback by facing Harmony Tan, a 24-year-old from France who is ranked 113th and owns a 2-6 career record in Grand Slam matches.

The placement of Williams in the women’s bracket was the most anticipated aspect of Friday’s draw at the All England Club. She is making her first appearance in singles at any tournament since she hurt her right leg and stopped playing during the first set of her first-round match at Centre Court a year ago.

Because of her lack of activity over the past 12 months, Williams — who has been No. 1 in the rankings — is outside the WTA’s top 1,200 this week and so could have ended up anywhere in the field and against any opponent in the first round. She only returned to the tour this week by playing two doubles matches at a tuneup event in England and was awarded a wild-card invitation to Wimbledon.

While the 40-year-old American’s track record would merit a seeding, the All England Club now adheres strictly to the rankings in determining how it seeds players.

Williams has won seven Wimbledon championships, part of her total of 23 Grand Slam singles titles, a record for the professional era. Tan, meanwhile, will be making her debut at the grass-court tournament.

If Williams gets past Tan, next up could be a match against Sara Sorribes Tormo, who is seeded 32nd but has never been past the second round at the All England Club or the third round at any major in 19 past appearances.

The third round potentially would put Williams against a tougher test: No. 6-seeded Karolina Pliskova, who was the runner-up to Ash Barty last year at Wimbledon and also reached the final of the 2016 U.S. Open — beating Williams in the semifinals there.

Barty retired at age 25 in March and so is not defending her title when play begins on Monday. That also leaves open the question of which woman will have the honor of playing the first match at Centre Court on Tuesday, a slot traditionally reserved for the prior year’s champion.

The two most likely choices would seem to be No. 1 Iga Swiatek, who enters on a 35-match winning streak and is coming off a title at the French Open, or Simona Halep, who won the 2019 trophy at Wimbledon, beating Williams in the final, but did not get the chance to begin things at Centre Court in 2020, when the tournament was canceled because of the coronavirus pandemic, or in 2021, because she was injured and unable to play.

The projected women’s quarterfinals based on seedings are Swiatek vs. No. 8 Jessica Pegula, Pliskova vs. No. 4 Paula Badosa, No. 2 Anett Kontaveit vs. No. 5 Maria Sakkari, and No. 3 Ons Jabeur vs. No. 7 Danielle Collins.

The potential men’s quarterfinals are top-seeded Novak Djokovic vs. No. 5 Carlos Alcaraz, No. 3 Casper Ruud vs. No. 7 Hubert Hurkacz, No. 2 Rafael Nadal vs. No. 6 Felix Auger-Aliassime, and No. 4 Stefanos Tsitsipas vs. No. 8 Matteo Berrettini.

Djokovic will get the honor of starting play on Centre Court on Monday, when he will face 75th-ranked Kwon Soon-woo of South Korea.

Although Djokovic’s ranking has slid to No. 3, he leads the men’s seeding because No. 1 Daniil Medvedev and No. 2 Alexander Zverev are not in the field. Medvedev is Russian, and all players from that country and Belarus were banned by the All England Club because of the war in Ukraine. Zverev is recovering after tearing ligaments in his right foot during his French Open semifinal against Nadal, who went on to win his 14th championship there and men’s-record 22nd overall at the majors.

Andy Murray, who won two of his three Grand Slam titles at Wimbledon, was drawn to face James Duckworth in the first round, while three-time major champion Stan Wawrinka goes up against No. 10 Jannik Sinner, and Nick Kyrgios faces British wild-card entry Paul Jubb.

Where To Stay, Shop, And Spa In Montreal