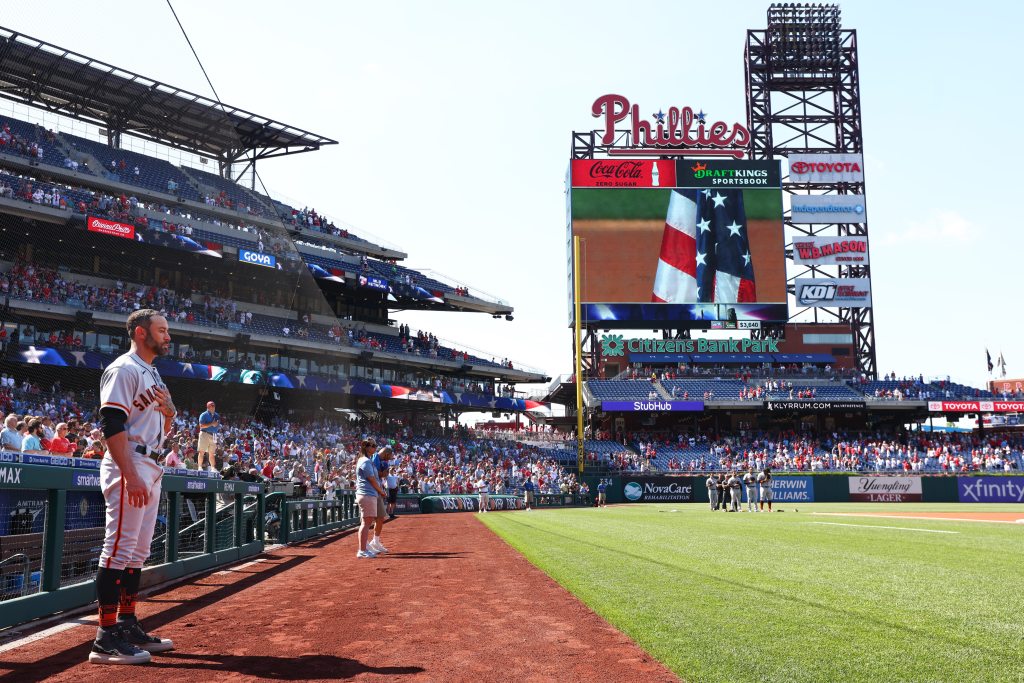 PHILADELPHIA — Three days after announcing he will no longer stand on the field for the playing of the national anthem in an act of peaceful protest, Giants manager Gabe Kapler said he will temporarily suspend his protest ahead of his team’s Memorial Day game in Philadelphia against the Phillies.

Returning to the city he spent the first two years of his managing career, Kapler was greeted by a horde of local and national media for his pregame session in the visitor’s dugout. He answered more questions on his anthem stance than his time here, explaining why he would stand for the anthem on the nation’s holiday meant to honor its fallen soldiers.

“I spent a little time thinking about this and talking to some people around the game but also veterans and people who are invested in gun control,” Kapler said, directing people to the latest post on his blog published Monday morning.

In the blog post, Kapler explained that he wants to honor “those who have paid the ultimate price for our rights and freedoms.”

“While I believe strongly in the right to protest and the importance of doing so, I also believe strongly in honoring and mourning our country’s service men and women who fought and died for that right,” Kapler wrote. “Those who serve in our military, and especially those who have paid the ultimate price for our rights and freedoms, deserve that acknowledgment and respect, and I am honored to stand on the line today to show mine.”

“Both of them are organizations I’ve had connection to over the last calendar year,” Kapler said. “They’re both organizations I believe strongly in and are worth a click and a look and see if people think those are good organizations to support. I fully do.”

In a blog post he wrote Friday, Kapler explained he considered taking a knee during the playing of the national anthem on Tuesday before the Giants played the Mets in the wake of the mass shooting in Uvalde, Texas, this week that left 19 children and two teachers dead.

Kapler said he would not report to the field for the playing of the anthem, “Until I feel better about the direction of our country,” though when asked he did not say whether he would resume the protest after Monday’s game.

“Every time I place my hand over my heart and remove my hat, I’m participating in a self congratulatory glorification of the ONLY country where these mass shootings take place,” Kapler wrote Friday morning.

Kapler was one of a handful in Major League Baseball to take a knee during the playing of the national anthem during the 2020 season, explaining to reporters he “wanted to use my platform to demonstrate my dissatisfaction with the way we’ve handled racism in our country.”

The social justice stand Kapler has taken this season has drawn attention from all corners of the country, including inside other clubhouses in baseball. Phillies manager Joe Girardi was the latest manager to say he disagreed with the specific action of skipping the national anthem but that he supported Kapler’s beliefs and his right to protest.

“Everyone has a choice in this country,” Girardi told reporters Monday in Philadelphia. “It’s not the choice that I’ll make. But with all the choices we make in life, there are consequences, right? So you have to be prepared to explain why you do things in this world. And it’s not something I would do.”

Asked if he believed he received a fair shake from Phillies ownership, which has given Girardi a third year despite a worse overall winning percentage, Kapler said, “Yeah, I think so. … You win a lot of baseball games, you stick around. I didn’t win enough baseball games.”

The Giants’ trip to Philadelphia was Kapler’s first time back at Citizens Bank Park without any pandemic restrictions on crowd size. Although he is in his third season in San Francisco, it also marked the first time Philadelphia media had an opportunity to meet with him in person since he joined the Giants because of the pandemic.

“It felt nice to walk in to the ballpark today,” Kapler said. “I have a lot of good relationships over there in the other clubhouse. Some great places around the city that I’m anxious to check in with if I have a chance. Glad to be back in Philadelphia.”

TIYA, a social audio platform and Clubhouse rival with 20m downloads, integrates Spotify into its app