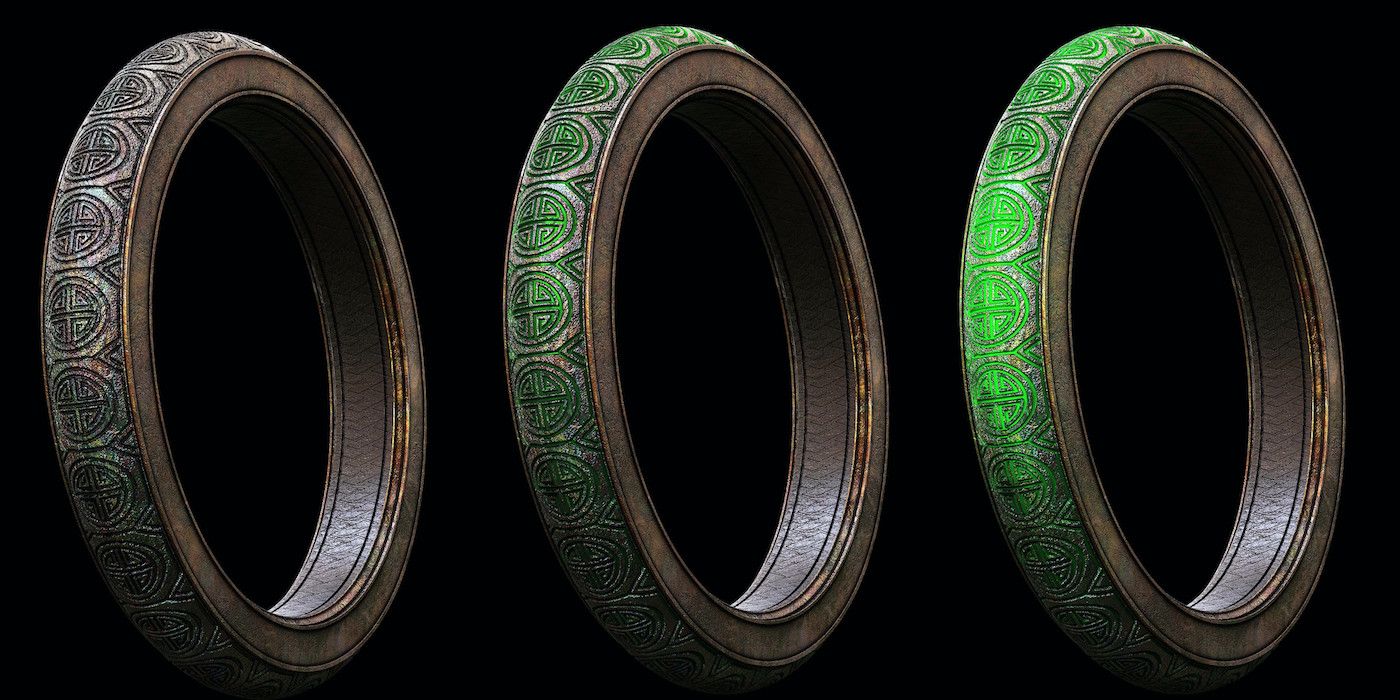 Shang-Chi and the Legend of the Ten Rings‘ titular weapon almost had a different design.

Marvel Studios concept artist Jerad S. Marantz shared his take on the mystical artifacts on his ArtStation account. “I got a chance to work on the rings for Shang Chi,” he wrote in the caption. “I was surprised that my buddy Andy Park put me on these. I usually don’t get the opportunity to work on props, but these were some pretty important props so I was excited to take a stab at it.”

In the end, though, Marvel Studios ended up going with Jackson Sze’s look for the Ten Rings. “He did an incredible job on that show,” Marantz wrote.

An ancient weapon of unknown origins, the Ten Rings grant their user immense physical power and eternal youth. After claiming the rings from his father, Shang Chi (Simu Liu) begins investigating the history of the weapon with the help of Doctor Strange‘s Wong (Benedict Wong), Bruce Banner / Hulk (Mark Ruffalo) and Carol Danvers / Captain Marvel (Brie Larson), discovering they are a beacon of some kind and sending a signal to an unknown location.

Directed by Destin Daniel Cretton and written by Cretton, Dave Callaham and Andrew Lanham, Shang-Chi and the Legends of the Ten Rings introduced Liu’s Shang-Chi / Shaun to the Marvel Cinematic Universe (MCU). The film was well-received by critics and fans, earning a 91% critical score and a 98% audience score on Rotten Tomatoes. It also grossed $224 million at the domestic box office and $432 million worldwide. A sequel with Cretton attached as director and writer is in the works.

Cretton will also spearhead an unknown Marvel Disney+ series as part of his overall deal with Marvel Studios and Hulu’s Onyx Collective. “Destin is an amazing collaborator who brought a unique perspective and skill to Shang-Chi and The Legend of the Ten Rings,” Marvel Studios President and Marvel Entertainment Chief Creative Officer Kevin Feige said at the time of the announcement. “We had a fantastic time working together on the film and he has so many intriguing ideas for stories to bring to life on Disney+, so we’re thrilled to expand our relationship with him and can’t wait to get started.”

Shang-Chi and the Legend of the Ten Rings is now streaming on Disney+.

Samuel Gelman started at CBR as a news writer in August 2019 before becoming a news editor in November 2019. While he has always loved superhero, sci-fi and fantasy films and TV series, it is only recently that he began reading comic books themselves. An adamant defender of The Last Jedi and the series finale of Lost, he can be reached at [email protected] or through his Twitter, @SamMgelman.