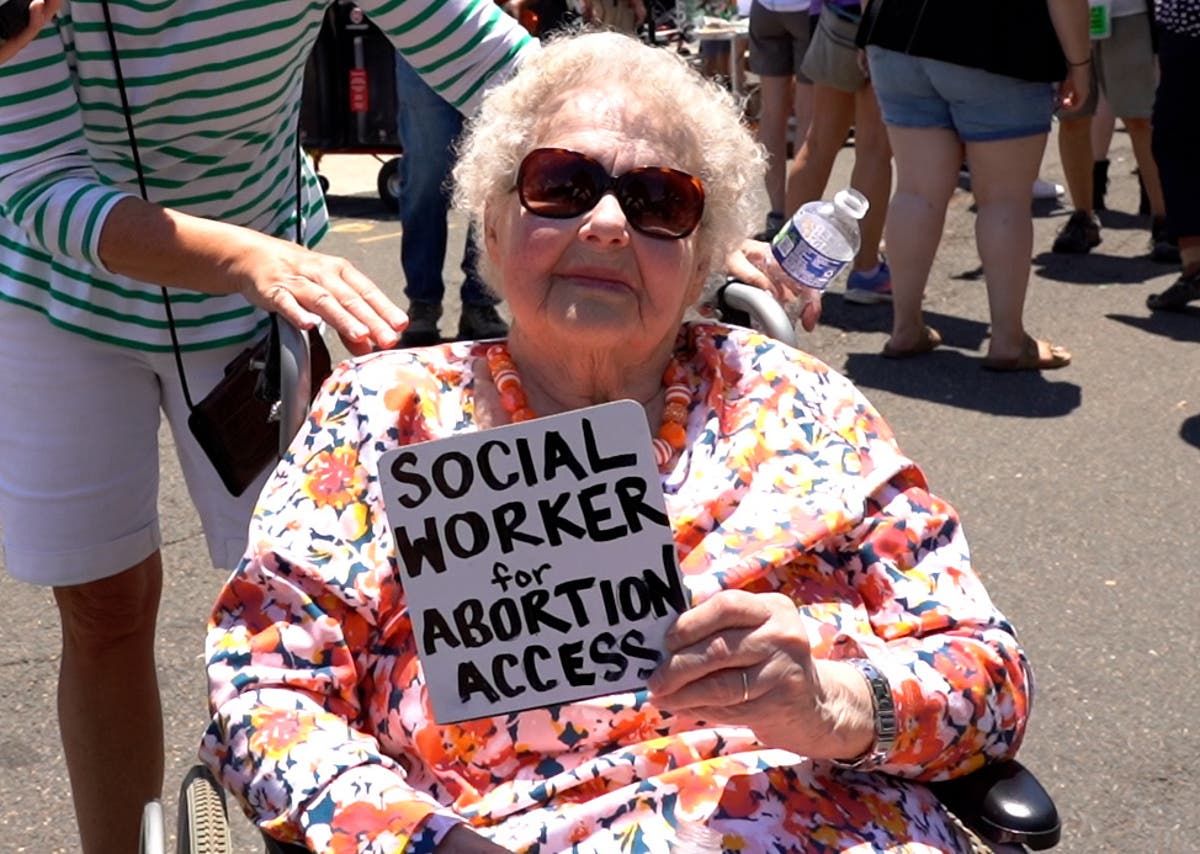 An elderly woman who started working in family planning on the day the Roe v Wade ruling was made has said she never thought she would be back outside the Supreme Court fighting for abortion rights 50 years later.

Carol Folk traveled from her assisted living home in Virginia to protest outside the US Supreme Court on Saturday after the nation’s highest court struck down the constitutional right to abortion access and pushed reproductive rights back to the 1970s.

Holding aloft a sign reading “Social worker for abortion access” from her wheelchair, she told The Independent she has seen the impact abortion bans and restrictions can have on women – in particular low-income women.

“I never thought it would be changed,” she said of the landmark Roe v Wade ruling.

“I had hoped it wouldn’t be but today I hope we can change it again.”

It was 22 January 1973 when Ms Folk started her first day of work in family planning counselling.

That very same day, the Supreme Court passed the Roe v Wade decision that ruled abortion as a constitutional right of the American people.

She remembered it being a “happy day” that would protect women from having to seek dangerous, illegal abortions and spoke of her fears that the US will now backpedal to that.

“My first day at work was when Roe v Wade came in and it was a happy day … you had so many stories of people getting bad responses from bad abortions and so we hope we don’t have that again,” she said.

Five decades on, she was back outside the Supreme Court with her daughter Freddie Folk protesting for the rights of women, including her two granddaughters and great-granddaughter.

Freddie told The Independent her mother had called her on Friday when the Supreme Court released its ruling and asked her to take her to the court.

“Mom was a family planning council for a county when Roe v Wade passed and so she realises that this will remove options, particularly for lower-income women who can’t travel,” she said.

She said her mother “wants women to keep up the fight as it’s not over”.

“She has a vested interest in this,” she said, adding that she too is concerned for her granddaughter’s generation.

The mother and daughter were among the hundreds of pro-choice advocates who had gathered outside the Supreme Court on Saturday in response to Friday’s ruling.

Many held up signs and chanted “f*** you SCOTUS” and “my body, my choice” while a small group of anti-abortion demonstrators also gathered outside the court to counterprotest.

On Friday morning, the US Supreme Court overturned the landmark Roe v Wade ruling, ending the fundamental right to abortion access for millions of women across America.

In the case of Dobbs v Jackson Women’s Health Organization, the nation’s highest court ruled 6-3 in favour of a Mississippi law that outlaws abortion at 15 weeks of pregnancy.

All six conservative justices voted to uphold the state’s abortion restriction and, in the process, five – excluding Chief Justice John Roberts – voted to strike down the 1973 Roe ruling which guaranteed a constitutional right to abortion and the 1992 Planned Parenthood v Casey ruling which had further cemented that right.

In their historic decision, the nine-person court has effectively backpedaled on the reproductive rights of the American people by 50 years and placed the power over women’s bodies in the hands of the states.

While the leak of a draft opinion last month revealed the court’s plan to overturn Roe, the decision was somewhat unexpected as Justices Neil Gorsuch and Brett Kavanaugh both swore under oath during their confirmation hearings that they believed the ruling was settled legal precedent.

Abortion instantly became illegal across several Republican-led states including South Dakota, Louisiana and Kentucky after they implemented “trigger laws” to ban the procedure as soon as Roe was overturned.

The three liberal justices wrote in their dissent that the ruling marked the end of women being “free and equal citizens” in the US.

“With sorrow – for this Court, but more, for the many millions of American women who have today lost a fundamental constitutional protection – we dissent,” reads the opinion from Justices Stephen Breyer, Elena Kagan and Sonia Sotomayor.

“Whatever the exact scope of the coming laws, one result of today’s decision is certain: the curtailment of women’s rights, and of their status as free and equal citizens,” they wrote.

In the majority opinion, Justice Samuel Alito wrote that Roe and Casey were “egregiously wrong” and “must be overruled”.

“Roe was egregiously wrong from the start,” he wrote.

“Its reasoning was exceptionally weak, and the decision has had damaging consequences.

“And far from bringing about a national settlement of the abortion issue, Roe and Casey have enflamed debate and deepened division.”

President Joe Biden addressed the nation from the White House, calling it a “sad day” for the nation and vowing to do “everything in my power” to protect access to abortion across the country.

“The health and the life of women in this nation are now at risk,” he said.

He urged voters to “make their voices heard” by electing officials in the midterms who “who will codify a woman’s right to choose into federal law once again”.

The final ruling comes over a month after a draft majority opinion was leaked back on 2 May, revealing the court’s intentions to end five decades of abortion rights.

Following the leak, several Democrat-led states moved to strengthen abortion protections while Republican states implemented “trigger laws” to ban or severely limit abortion access as soon as the ruling was handed down.

Around half of all US states are expected to ban or severely restrict abortion now that Roe has been lifted.

Fears are growing that abortion is only the start of several rights now under attack with the constitutional right that Roe was based on – the 14th amendment right to privacy – also being used to set precedents in other cases including the right to contraception and same-sex marriage.

In his opinion concurring with the majority ruling, Justice Clarence Thomas said that the Supreme Court should also “reconsider all of this Court’s substantive due process precedents, including Griswold, Lawrence, and Obergefell.

“We have a duty to ‘correct the error’ established in those precedents,” he wrote referring to the rulings that Americans have a right to contraception, to same-sex sex and same-sex marriage.

The Main Cast Of Black Adam & Their Best Movie