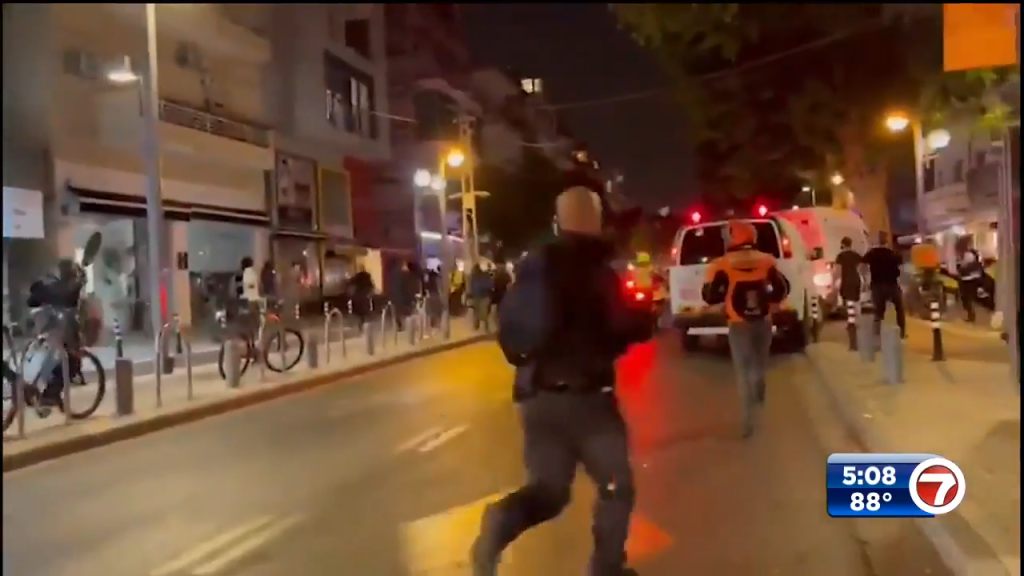 The motive for the shooting was not immediately clear, but it came amid heightened tensions following a series of deadly attacks carried out by Palestinians. Police said there were “indications” it was a terrorist attack. The militant Hamas group that rules the Gaza Strip praised the attack but did not claim responsibility.

Live footage from Israel’s Kan broadcaster showed police flooding the area and training their guns on the upper story of a building. It also showed an explosion of some kind. Police urged people to avoid the area.

Amichai Eshel, the Tel Aviv police commander, said the shooter opened fire into a crowded bar at around 9 p.m. and then fled the scene.

“Our working assumption is that he is still in the vicinity,” he told reporters. “As of right now, there are indications pointing to this being a terrorist attack, but I have to be very delicate about this, and say that we are also checking other leads.”

Israel’s Magen David Adom emergency service said it received reports of a shooting at “several scenes” around downtown Tel Aviv. It said two men around 30 years old were killed. Another seven people were wounded, three of them seriously, it said.

At least one shooting took place on Dizengoff Street, a central thoroughfare. Dizengoff Street has been the scene of several deadly attacks over the years. Most recently, an Arab citizen of Israel shot and killed two Israelis and wounded several others on the street in January 2016.

The popular nightlife area was packed on Thursday evening, the beginning of the Israeli weekend.

Prime Minister Naftali Bennett was monitoring the situation from the Israeli military headquarters, which is also in downtown Tel Aviv, his office said.

Tensions have been high after a series of attacks by Palestinian assailants killed 11 people just ahead of the holy Islamic month of Ramadan, which began nearly a week ago. Last year, protests and clashes in Jerusalem during Ramadan ignited an 11-day Gaza war.

Israeli, Jordanian and Palestinian leaders have held a flurry of meetings in recent weeks, and Israel has taken a number of steps aimed at calming tensions, including issuing thousands of additional work permits for Palestinians from the Hamas-ruled Gaza Strip.

Prior to the attack, Israel had said it would allow women, children and men over 40 from the occupied West Bank to pray at the Al-Aqsa Mosque in east Jerusalem on Friday, the first weekly prayers of Ramadan. Tens of thousands were expected to attend.

The mosque is the third holiest site in Islam and sits on a hilltop that is the most sacred site for Jews, who refer to it as the Temple Mount. The holy site has long been a flashpoint for Israeli-Palestinian violence.

Israel has worked to sideline the Palestinian issue in recent years, instead focusing on forging alliances with Arab states against Iran. But the century-old conflict remains as intractable as ever.

Israel captured east Jerusalem, the West Bank and the Gaza Strip in the 1967 Mideast war. The Palestinians want all three territories to form their future state. The last serious and substantive peace talks broke down more than a decade ago, and Israeli Prime Minister Naftali Bennett is opposed to Palestinian statehood.

Israel annexed east Jerusalem in a move not recognized internationally and considers the entire city to be its capital. It is building and expanding Jewish settlements in the West Bank, which most of the international community considers illegal.

It withdrew soldiers and settlers from Gaza in 2005, but along with neighboring Egypt it imposed a crippling blockade on the territory after the militant Hamas group seized power from rival Palestinian forces two years later. Israel and Hamas have fought four wars since then.

Hamas spokesman Abdelatif Al-Qanou said late Thursday that the “the heroic attack in the heart of the (Israeli) entity has struck the Zionist security system and proved our people’s ability to hurt the occupation.”

On March 29, a 27-year-old Palestinian from the West Bank methodically gunned down people in the central town of Bnei Brak, killing five. Two days earlier, a shooting attack by two Islamic State sympathizers in the central city of Hadera killed two police officers. The week before, an IS sympathizer killed four people in a car-ramming and stabbing attack in the southern city of Beersheba. The Hadera and Beersheba attacks were carried out by Palestinian citizens of Israel.

The recent attacks appear to have been carried out by lone assailants, perhaps with the help of accomplices. No Palestinian militant group has claimed them, though Hamas has welcomed the attacks.

Israel says the conflict stems from the Palestinians’ refusal to accept its existence as a Jewish state and blames attacks in part on incitement on social media. Palestinians say such attacks are the inevitable result of a nearly 55-year military occupation that shows no sign of ending.

Copyright 2022 The Associated Press. All rights reserved. This material may not be published, broadcast, rewritten or redistributed.