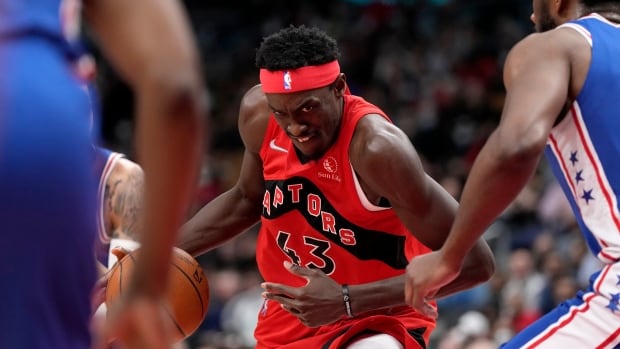 Pascal Siakam had 37 points, 12 assists and 11 rebounds for his third-career triple-double, and the undermanned Toronto Raptors edged the Philadelphia 76ers 119-114 on Thursday, in a potential post-season preview.

Scottie Barnes chipped in with 13 points and 10 rebounds, for the Raptors (47-33), who were missing starters Fred VanVleet and OG Anunoby. VanVleet took the night off to rest his sore knee, while Anunoby (thigh contusion) is expected to play Sunday.

Joel Embiid had 30 points to top the Sixers, who lost for the first time in four games.

Two nights after clinching a playoff spot with a win over Atlanta, the Raptors trailed by 15 points in the early going on Thursday. But they quickly turned it around and were up 97-95 to start the fourth quarter.

Achiuwa’s fifth three-pointer of the night saw the Raptors go up 102-92 with 6:48 to play, and brought the capacity Scotiabank Arena crowd of 19,800 — that included Drake and the Toronto Blue Jays’ Alek Manoah and Vladimir Guerrero Jr. — to its feet.

Danny Green’s three-pointer from in front of the Raptors’ bench sliced the difference to four points with 2:13 to play, but Siakam replied with a fabulous zig-zag move around Embiid to score.

On Philly’s next possession, Siakam stole the ball off James Harden and Barnes raced downcourt for a thunderous dunk and an eight-point difference.

Siakam went to the free-throw line in the dying seconds to chants of “M-V-P!”

Green finally received his 2019 Raptors NBA championship ring, 1,030 days after Toronto won the Larry O’Brien trophy. A confluence of events around COVID-19, including the Raptors playing out of Tampa, Fla., last season, pushed back the ceremony until Thursday. Green was feted with a video tribute and standing ovation, and VanVleet and Siakam presented the enormous diamond-encrusted ring.

Former Raptor Danny Green, playing in his first regular season game in Toronto since winning the 2019 NBA title, is presented his championship ring. 0:53

The festive moment was then quickly dampened by the Raptors’ horrible start. The Sixers connected on seven three-pointers in the first quarter and Embiid’s dunk before the game was even five minutes old put the visitors up 17-2. The Raptors replied with a 12-3 run and trailed 33-26 to start the second.

Trent Jr.’s three-pointer at 9:23 of the second quarter capped a 9-1 Raptors run for their first lead since the game’s opening points. Achiuwa’s second three-pointer put Toronto up by five, but the Sixers ended the quarter with a 7-1 run to head into halftime up 60-56.

Siakam led the way with 15 points in the third quarter, and his pullup jumper with 1.8 seconds left sent Toronto into the fourth with a two-point lead.

The Raptors’ post-season opponent might not be decided until the various regular-season finales on Sunday, with Boston, Milwaukee and Philadelphia battling for second through fourth in the East.

The Raptors host Houston on Friday then wrap up the regular season in New York on Sunday.

Philly guard Matisse Thybulle was listed as “ineligible to play” in Toronto, meaning he might also be unable to play at Scotiabank Arena were the Raptors and Sixers to meet in the playoffs. Players must be vaccinated in order to play in Canada. The reverse is true for Toronto players travelling south of the border, but the entire Raptors roster is vaccinated.

Gunman Escapes After Killing 2 in Tel Aviv, in Latest Attack in Israel