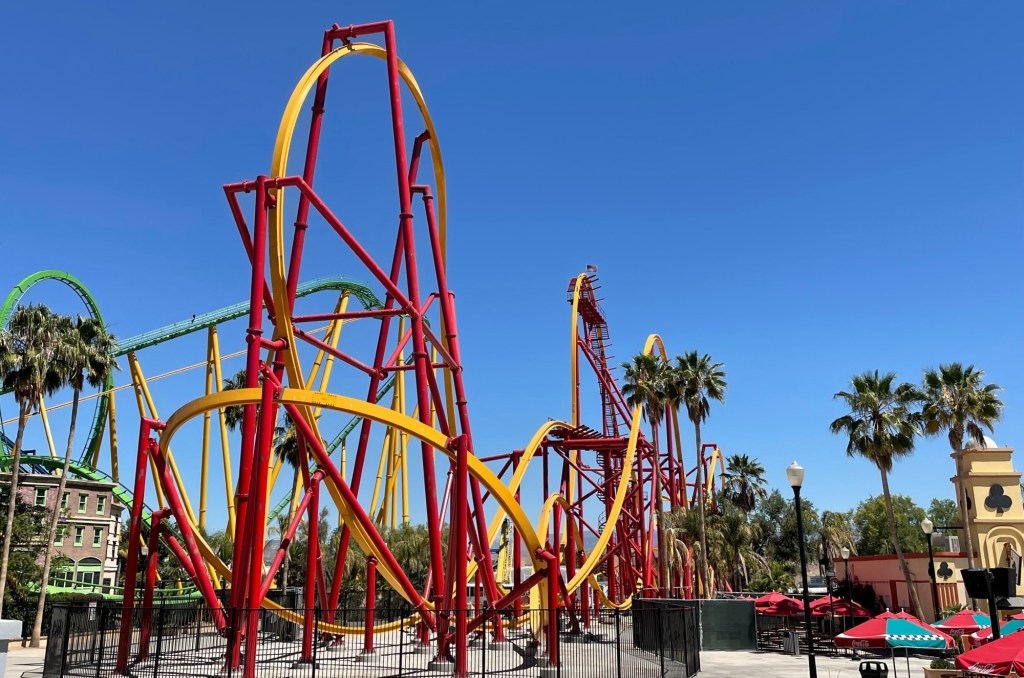 Six Flags Magic Mountain has moved one step closer to opening the new Wonder Woman roller coaster this summer with the completion of the golden “lasso of truth” single-rail track in the DC Comics area of the Valencia amusement park.

Works crews have finished installing the final track section on the Wonder Woman Flight of Courage roller coaster, according to Magic Mountain officials.

Magic Mountain still needs to apply a few final touches to the attraction, test the coaster trains and complete the remodel of the DC Universe themed area before the new Wonder Woman ride opens to visitors. On-track coaster train testing is expected to begin in the next few weeks.

Magic Mountain has not yet announced an opening date for Wonder Woman Flight of Courage beyond “Summer 2022.” That gives the park until late September to open the new ride if progress on the project remains on schedule.

Magic Mountain season passholders will get a preview of the Wonder Woman coaster before the new ride opens to the general public — which should offer the first hint of an opening date later this summer.

The double out-and-back layout with a gold single-rail track and red supports stretches between the DC Universe and Metropolis Plaza areas of the park running alongside the Riddler’s Revenge coaster and switching back in front of the Justice League 3-D dark ride.

The new Wonder Woman Flight of Courage coaster will reach a top speed of 58 mph after climbing a 131-foot-tall lift hill and descending an 87-degree first drop. The ride’s four 12-passenger trains will travel over a 3,300-foot-long track featuring three inversions — a raven dive, zero gravity roll and 180-degree stall.

The Raptor single-rail track by Rocky Mountain Construction employs an innovative new coaster design from the Idaho-based ride manufacturer. Passengers on a RMC single-rail coaster sit in an inline-style train with their legs straddling an I-beam track.

Magic Mountain’s new coaster will be similar to the Jersey Devil coaster at Six Flags Great Adventure in New Jersey that opened in June 2021.

The Greek-inspired entrance and queue for Flight of Courage will be themed to the hidden island of Themyscira, the fictional island home of Wonder Woman. The queue will showcase the legacy and life of Wonder Woman while explaining how she obtained her super powers.

The addition of the Wonder Woman coaster in the DC Universe area of the park will also include a new restaurant and bar as well as a retail shop.

The COVID-19 pandemic forced Magic Mountain to press pause on the ride project that was initially set to open in 2021 in the DC Comics-themed area of the park.

Magic Mountain was quietly laying out plans for the innovative new single rail roller coaster just before the Valencia amusement park was shuttered by the coronavirus outbreak and Six Flags slashed $50 million in planned capital projects.

The “2021 roller coaster” was approved in early March 2020 by the County of Los Angeles Department of Regional Planning just 10 days before Magic Mountain closed due to the COVID-19 pandemic.

The Wonder Woman: Lasso of Truth thrill ride at Magic Mountain was renamed and rethemed as Teen Titans Turbo Spin to make room for the new coaster named for the comic book superheroine.

Want to stay slim? Turn your phone, TV and lights off before bed, scientists say

Why Did These Carnivorous Plants Switch Their Diet From Bugs To Poop?