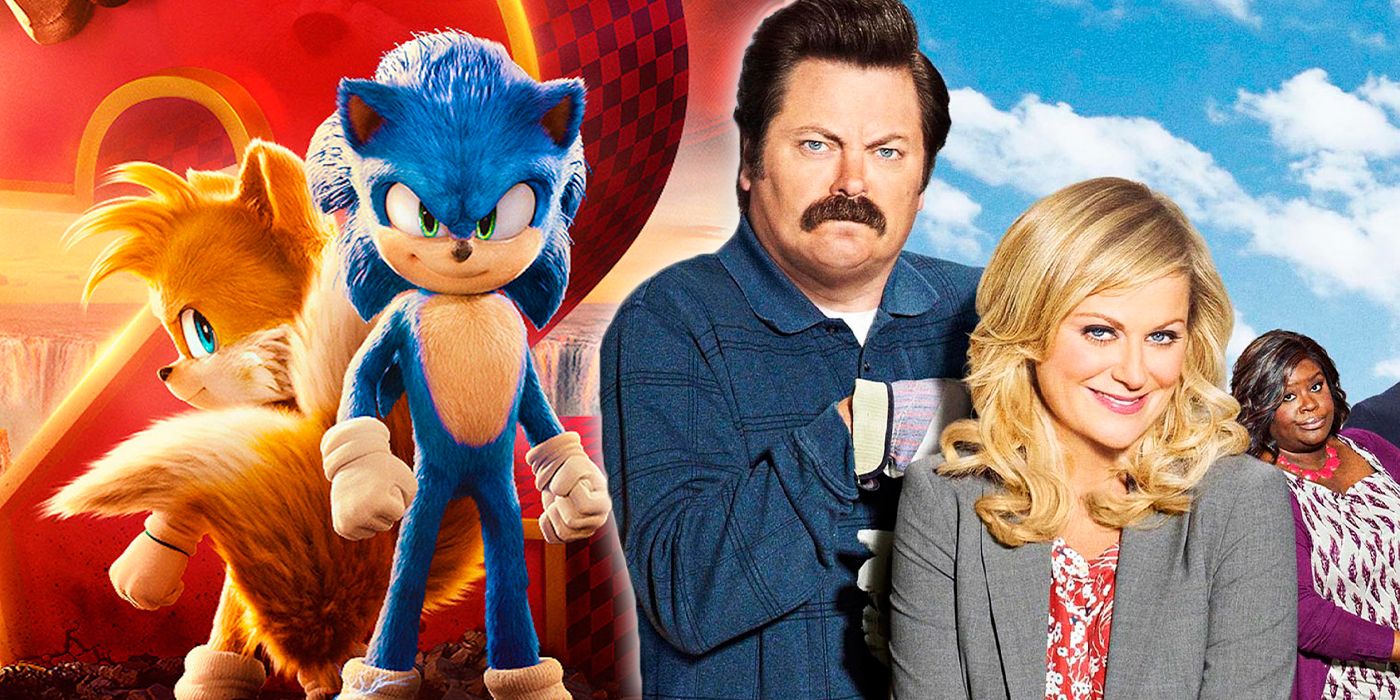 Like any actor, Ben Schwartz’s career can’t be boiled down to a single role. Sonic the Hedgehog fans of all ages will know him as the voice of their favorite spiny speedster, especially after Sonic 2‘s record-breaking performance. Schwartz’s career is bigger than even the role of the beloved Sega mascot turned multimedia star.

Schwartz has an impressive voice acting resume beyond Sonic. He’s played another anthropomorphic icon, Teenage Mutant Ninja Turtle Leonardo. He’s also appeared in adult animated series, like The Boys Presents: Diabolical. His live-action credits include everything from Modern Family to House of Lies. It was Schwartz’s best-loved live-action role, Jean-Ralphio Saperstein in Parks and Recreation, that got a surprising shout-out in Sonic’s latest cinematic adventure.

Before all the commotion with Doctor Robotnik and future spinoff star Knuckles the Echidna begins in Sonic 2, Sonic is house-sitting for his adoptive parents. Sonic and the family dog are watching a movie, which Sonic describes as “the worst.” While this might seem like an example of the old adage “everyone’s a critic,” Parks and Recreation fans will be very familiar with the specific intonation Schwartz used to describe what Sonic was watching.

Jean-Ralphio had a habit of singing some of his lines. It was one of the many quirks that helped him stand out among Parks and Recreation‘s many eccentric supporting characters. The most memorable time Jean-Ralphio talk-sang to someone came in Season 5, Episode 16, “Bailout,” and it involved two people very close to him.

Jean-Ralphio’s best friend, Tom Haverford, had finally come up with a successful business venture after many fruitless attempts. Business was booming at Rent-A-Swag, a clothing rental store where the diminutive Tom rented his used designer clothes to teenagers. The only fly in the ointment was a difficult employee, Jean-Ralphio’s twin sister Mona-Lisa, whom Tom hired as a favor to his friend.

RELATED: Parks & Rec: How Season 7 Snuck in an Oblique Reference to a Forgotten Character

Jean-Ralphio was appreciative of what Tom did for his sister, but he didn’t mince words about her character. He described her as “the worst,” singing it at perpetual Parks and Recreation straight man Ben Wyatt for emphasis. After Mona-Lisa threatened to start a fire if Tom wouldn’t leave work early, Jean-Ralphio sang “the worst” directly into Ben’s ear. Injecting some physical comedy into the scene, Jean-Ralphio leaned on Ben’s shoulder until he fell over.

The combination of Jean-Ralphio’s singing and Ben’s reaction made the scene an unforgettable one for Parks and Recreation fans. It became a meme among the show’s audience, one whose potency increased as the show became a “comfort food” favorite after multiple rewatches. It exemplifies how Jean-Ralphio, a character who only appeared in 20 of the show’s 124 episodes, became such a fan favorite despite competing with iconic characters like Ron Swanson and future Marvel Cinematic Universe star Chris Pratt’s Andy Dwyer for the audience’s attention and affection.

Schwartz dropped the Parks and Recreation reference in Sonic’s mouth out of necessity. The actor had to film multiple takes of Sonic commenting on a movie because the rights to a specific one hadn’t been secured yet. As Schwartz told Entertainment Weekly, director Jeff Fowler and producer Toby Asher eventually decided to have him use a line that could apply to whatever movie wound up in the final product. They settled on the Parks and Recreation reference. Schwartz was delighted because it meant that his most memorable live-action character “is canon in the Sonic universe.” There will not be a crossover between Sonic and Parks and Recreation beyond fan fiction, but this Easter egg is a solid substitute.

To see the sneaky Parks and Recreation Easter egg, Sonic the Hedgehog 2 is now in theaters.

Sonic the Hedgehog 2: Is It Too Early for [SPOILER]?

Robert Curran lives in Deep South Texas. He is a life long fan of comic books, video games, and pro wrestling. He spent five years in the trenches of his local comic book shop. His work has appeared in WWE Magazine (when WWE had a magazine), Comics Should Be Good, and Inside Pulse. Follow him on Twitter @RBCURRAN.