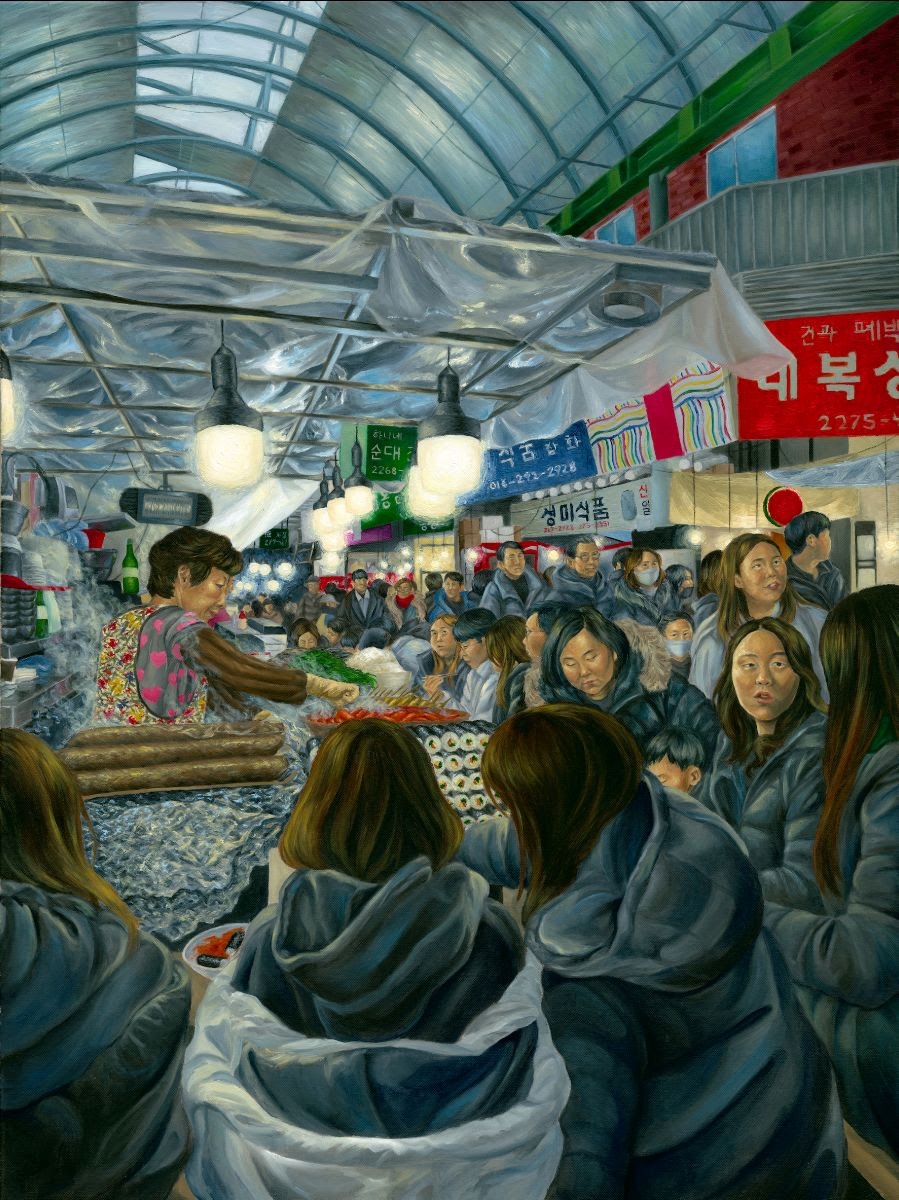 Palo Alto High School senior Gina Bae, whose oil painting “Gwangjang Market” was named Best in Show, said in her artist’s statement that she hopes for “a welcoming brave new world that brings all types of people to talk and eat delicious food together despite our differences, just like Gwangjang Market.” Gina was awarded a $5,000 scholarship for her painting, which depicts a busy marketplace she visited on a trip to Korea.

“Visiting Gwangjang Market was a big dose of culture shock for me, from the almost aggressively vocal vendors to the staple long puffer coats and uniform makeup style of the bustling crowd,” her statement reads. “But I was never treated as an outsider despite my American status and meager Korean vocabulary, which served as a strong contrast when I returned home shortly before the rise of COVID-19 and consequent anti-Asian sentiment.”

Branham High School sophomore Varvara Levshakova also drew inspiration for from another country. For “Lines,” which was awarded first place in the mixed-media category, Varvara combined a pencil sketch with printed text to depict the Moscow subway system.

“I sketched architecture and the subway map of Moscow to represent my attachment and love for the city of Moscow, the place I come from,” Varvara said. “The articles in the background reference specific events that show that the government has been ignoring people’s rights through the past several years. In the future, I wish to see the government listen to its people’s voices and needs.”

Gina and Varvara’s artworks were among 79 works chosen from 580 entries for NUMU’s ArtNow exhibit, which closed May 22. These works represented students from 26 high schools across Santa Clara County.

Environmental as well as sociopolitical concerns were on the minds of other young artists in the show. “Welcome to California,” an oil painting by Gunn High School junior Hannah Helmy, shows a figure in a hazmat suit walking through a blaze into a room full of clocks.

“Fires, if not properly addressed in a timely manner, will end up becoming a normal and accepted part of our life” said Hannah, whose work took second place in the painting category. “As humans, we will adapt and create a society around it, but in the end we’ll have to enter a new world, experiencing natural or manmade disasters like this on a daily basis, although we would want to go back to the time where everything was peaceful.”

“I created this piece to symbolize the decay and acceptance of my fears,” Antara said. “I take inspiration from our vibrant relatives, the fungi, who dutifully recycle dead matter into nutrients for new life. Within the vulnerability of this piece, there is bravery: the person is tranquil, despite the exposed holes in their arm and chest. I hope to convey that decay need not be frightening; instead, it offers a possibility for new growth.”

“The brave new world I envision is one where queer people are recognized as beautiful for their identities,’ Reese said. “This piece utilizes clean shapes and overlapping layers to exemplify the complexity in each individual in our world. The varying color pallets within each figure and overlapping layer further contribute to emphasizing community among the unique.”

For a complete list of ArtNow award winners, visit https://www.numulosgatos.org/exhibitions-2/artnow-2022-brave-new-worlds.

Guns overtake cars as leading cause of death for U.S. youth

Things to do in L.A. this weekend: Bad Bunny heads to SoFi, Shaquille O'Neal…

How New England journalists are making their mark on TikTok

Eufy launches the next generation of its home security…

Millions of women at risk of killer cancer because they miss…

They hunkered down in Disney World for Hurricane Ian – this…