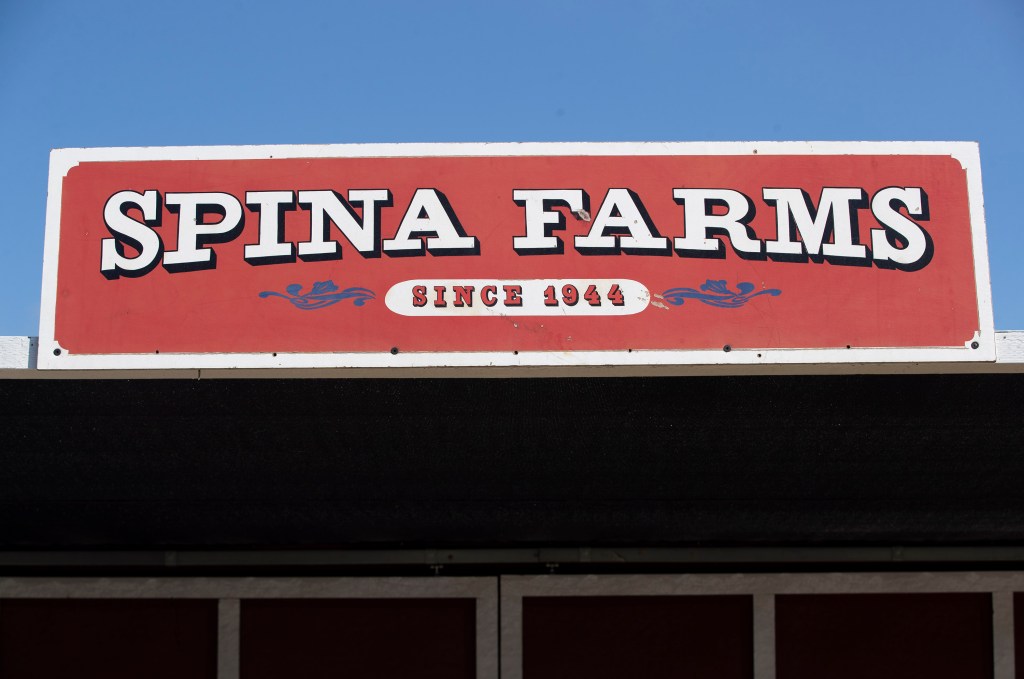 Spina Farms Pumpkin Patch and Fruit Stand — which for nearly 80 years has served as a cornerstone of the green expanse on the southern edge of San Jose — will reopen next month in the heart of Santa Clara County’s Coyote Valley.

A change in zoning regulations and termination of its previous lease had threatened the future of the iconic, longstanding farm stand. But thanks to a new arrangement with the Santa Clara Valley Open Space Authority, the beloved South Bay destination will begin welcoming visitors again next month just a quarter-mile south of its previous location.

“Spina Farms is a part of the historical and cultural picture of Coyote Valley. It’s a place that has touched the hearts of many generations of people who identify with the valley of the heart’s delight — and the thought of that disappearing was unconscionable,” said Andrea Mackenzie, general manager of the Open Space Authority.

Spina Farms was established by John and Linda Spina in the 1940s in Coyote Valley, a largely undeveloped expanse used for farming, wildlife linkages and recreational activities like hiking and biking. Over the past decade, the fruit stand and pumpkin patch have changed hands several times, most recently with business partners Gary Tognetti and Paul Mirassou purchasing it in 2019.

Late last year, the San Jose City Council unanimously approved a series of land-use changes aimed at indefinitely protecting the bulk of North and Mid-Coyote Valley from major development. Following that move, the owners of the land where Spina Farms had been located for decades — at the intersection of Santa Teresa Boulevard and Bailey Avenue — informed the operators of the farm stand and pumpkin patch that its lease would not be extended.

The fruit stand has been closed since the end of last year and, since then, Tognetti said he’s been receiving “nothing but phone calls from folks asking when it’s going to reopen.”

Tognetti and Mirassou initially considered moving the operation to Gilroy but didn’t want to lose its roots in the valley.

Under a new lease signed with the Open Space Authority, which aims to conserve the valley’s open agricultural lands, the Spina Farms Fruit Stand is set to open in July near the intersection of Laguna Avenue and Santa Teresa Boulevard. The annual Spina Farms Pumpkin Patch is scheduled to take place from Sept. 26 through Nov. 6 at the same 60-acre property, which will allow the operators to double the size of the pumpkin patch and corn maze this fall.

“I’m really happy to work with Open Space,” Tognetti said. “What they’re working for are the same goals that I have — preserving agriculture and the land and keeping farming alive.”

The Open Space Authority — in partnership with the State of California Department of Conservation, Santa Clara Valley Transportation Authority and the Santa Clara County Planning Department —  purchased the 60 acres of farmland from WP Investments, LLC. for $3 million in October 2021. The Authority’s goal with the acquisition was to establish sustainable, local climate-friendly agricultural practices within Coyote Valley.

Organizations focused on preserving Coyote Valley’s undeveloped land, including the Open Space Authority and the Palo Alto-based nonprofit Peninsula Open Space Trust, say it’s imperative to safeguard the region’s water quality and wildlife, increase recreational opportunities for the community and support small farmers. Coyote Valley, which spans a total of 7,400 acres, is the last remaining open valley floor in the Bay Area for wildlife to migrate between the Santa Cruz Mountains and the Diablo Range, and it naturally allows stormwater to seep into the groundwater table below instead of rushing down Coyote Creek and inundating downtown San Jose neighborhoods, as it did during the major floods of 2017.

In terms of this 60-acre undeveloped Coyote Valley property, Spina Farms will have access to the full 60 acres through the end of 2022 and then reduce its operations to 40 acres to allow other farmers an opportunity to lease the remaining land.

“This, in many ways, is a foundation for us to build on and to encourage new and beginning farmers to come into Coyote Valley and have this become a sustainable, agricultural landscape that the public can be a part of,” Mackenzie said. “It’s so important to have this treasured landscape for future generations and we’re really excited about the possibilities.”

Why is it gaining traction?

Biden, Harris vow in Zelenskyy call that US ‘will never recognize’…