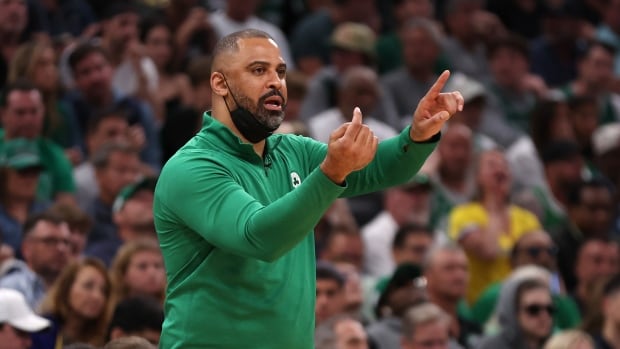 This is a column by Morgan Campbell, who writes opinion for CBC Sports. For more information about CBC’s Opinion section, please see the FAQ.

We knew Jayson Tatum would field some heavy questions at Boston Celtics media day this week. He’s the best player on last season’s NBA Finals runner-up, set to lead the team into an uncertain season.

The Celtics’ once-bright outlook has grown hazy following the news that the club had suspended its head coach, Ime Udoka, for the upcoming season for his role in a workplace sex scandal.

If Tatum, a three-time all-star, wasn’t privy to inside information on Udoka’s alleged indiscretions, he at least figured to have known before we did. If nobody at the Celtics gave him a heads-up, how did the MVP of last season’s Eastern Conference Final learn that Udoka wouldn’t coach the team this year?

If you logged on sports Twitter, or caught a debate show late last week, then you probably consumed some of the many, many, many bold, bad takes this situation has generated. All a normal part of the sports news and opinion cycle, except that for all the talk on TV and bickering on Twitter, we still have less than a handful of facts.

Thanks to gossip sites and some well-placed anonymous sources, we have an idea about what’s been happening, but in terms of verified facts we still don’t know much.

It’s been established that the 45-year-old Udoka, who is engaged to the actress Nia Long, had an affair with a married member of the Celtics staff. He will miss all of the 2022-23 season, serving a team-imposed suspension.

The other clear truth that has emerged since this news broke?

That neither the Celtics, nor a sports media that depends on scoops, speculation and strong opinions, are equipped to handle a scandal like this one.

This story started as most big NBA news does — with a tweet from ESPN basketball insider Adrian Wojnarowski.

From there, Shams Charania, the Tyson Gay to Wojnarowski’s Usain Bolt in the endless race to break NBA news, had added some detail. Udoka’s looming suspension stemmed from a “consensual relationship” with another Celtics employee.

“We have a lot of talented women in our organization, and I thought yesterday was really hard on them,” Stevens said at the news conference last Friday. “I think that nobody can control Twitter speculation, rampant bulls—t, but I do think that we as an organization have a responsibility to make sure we’re there to support them now, because a lot of people were dragged unfairly into that.”

Of course, if Stevens is frustrated over rumours, he should tell his Celtics colleagues to run a tighter media ship.

Wojnarowski and Charania have built huge social media followings, and earn big salaries, relaying tidbits of info from agents and well-placed team sources. This setup works when discussing trade possibilities, or the kind of public posturing that accompanies contract negotiations.

The ensuing speculation keeps Twitter users occupied, and sports opinion-havers — whether they write, broadcast or podcast — talking until some new information arrives to keep the conversation going. Eventually, the trade or the new contract either happens … or it doesn’t. Either way, the events and the media chatter they spawn are largely harmless.

But here we have fragments of facts, revealed over a series of tweets, followed by a Celtics news conference that didn’t clarify much. In between each revelation, rumours spread. Social media users shared names and pictures of women they figured were involved, only to learn later that they weren’t.

To people hitting retweet, it’s all as innocuous as off-season trade talk. But to women working for or with the Celtics, like sideline reporter Amanda Pflugrad, the innuendo does real damage.

“Seeing uninvolved people’s names thrown around in the media, including mine, with such carelessness is disgusting,” Pflugrad wrote on Twitter. “This is a step backwards for women in sports who have worked hard to prove themselves in an industry they deserve to be in.”

The Robert Sarver saga shows us how this all should work.

Last year, ESPN published a thoroughly reported story laying out allegations of workplace racism and sexism from Sarver, the majority owner of the Phoenix Suns and Phoenix Mercury. Sarver’s camp denied the accusations, and impugned ESPN’s ethics, but a subsequent investigation vindicated the reporter, and added even more detail to Sarver’s misbehaviour. This month the league fined him $10 million US and suspended him for a year, and now Sarver is seeking buyers for his teams.

Strong opinions percolated when the news first broke, and popped up again when the league sanctioned Sarver. We didn’t all agree, but at least we drew our opinions from agreed-upon facts.

This time, with Udoka, we have words hinting at something, but saying almost nothing.

“Consensual,” describing the extramarital affair, means it wasn’t assault, which is a relief. The label also set off a lot of people, including ESPN personality Stephen A.Smith, upset that Udoka seems to have been punished for a routine office romance.

But “consensual” still describes a broad range of sexual relationships, which can still be illicit, and still involve conflicts of interest.

It might mean a married boss manoeuvring an existing girlfriend into a sham job — like former University of Arkansas football coach Bobby Petrino.

It could also mean a one-night-stand with an assistant coach’s future wife. An arrangement like that ended with former Louisville basketball coach Rick Pitino testifying in the extortion trial of the woman who he said seduced him.

Or it could mean having extramarital affairs up and down the chain of command, like an old boss of mine at the Toronto Star did.

All those relationships were consensual, and they all still contributed to what we now call workplace toxicity, and so they all can, depending on your company’s rules, land you in serious trouble.

So, no, the word “consensual” doesn’t offer much clarity, and neither does the revelation that Udoka made “unwanted comments” to his partner in the affair. Another phrase people use hoping the listener will fill in the gaps, and a carryover from the daily reporting on sports teams, where terms like “upper body injury” pass as useful information.

Is it a bruised forearm? Torn pec? Broken neck? It’s whatever you decide it is.

The relevant fact here is that the comment, whether it was “it’s over” or “you look hot in that dress,” prompted the investigation that led to the suspension. We’ll need to look there to learn what actually prompted the Celtics to send their head coach to purgatory.

The other thing we know:

Some reporter somewhere is working on the story. We’ll get some details eventually, and the opinion machine will fire up again.

This time, fuelled by facts.