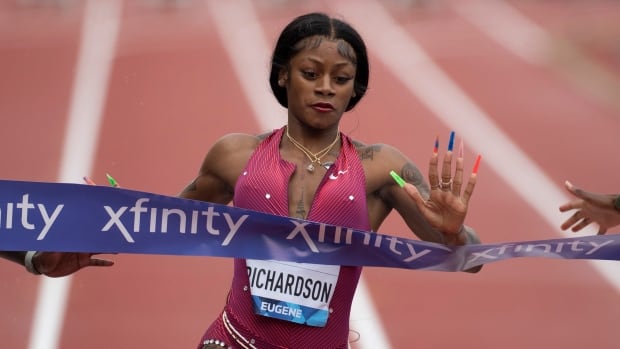 Sprinter Sha’Carri Richardson appears to have both her speed and swagger back for the U.S. track and field championships.

A victory this week at Hayward Field in Eugene, Ore., and it’s on to the world outdoor championships, the sport’s highest-profile event outside of the Olympics. Richardson missed out on the Tokyo Games because of a failed drug test for marijuana.

“Don’t let the media, don’t let people, don’t let a company, try to stop you from shining, because you sunshine,” Richardson said as cheering young fans called her name at a recent race in New York. “We are the light.”

Richardson is entered in both the 100 and 200 meters at the national championships, which kicks off Thursday in the Oregon city known as “Track Town.” If she places in the top three in those events, she move on to worlds next month, also at Hayward Field.

Richardson garnered attention last summer when she won the 100 metres at the Olympic trials, which determined the team for Tokyo. But her title was stripped after she tested positive shortly after the race.

She was handed a 30-day suspension that kept her out of the event in Tokyo, and she was also left off the U.S. team as part of the relay pool, although her suspension would’ve been completed by the time of the 4×100 race.

She acknowledged the mistake in an interview with the “Today” show after her suspension. She said she used marijuana as a way of coping with her mother’s recent death. But on Twitter this week she lamented the interview: “I wish I never did this. I wish I had the choice when it was time for me to tell my story.”

A few weeks after missing out on racing at the Olympics, Richardson finished last in the 100 at the Prefontaine Classic. She faced criticism after that August race from some of the more traditional corners of the sport that she was all talk and no substance.

But at this year’s Pre, as it is known, the 22-year-old Texan finished second to Olympic gold medallist Elaine Thompson-Herah of Jamaica in the 100, running in a solid 10.92 seconds.

This month at the inaugural NYC Grand Prix, Richardson won the 200 in 22.38, and came in second in the 100 in 10.85, a season-best. And she did it in style, with a unique red fishnet track suit and rhinestones dotting her face.

“I feel phenomenal,” she said afterward.

‘Smoke ’em on and off the track’

She said her pre-race hype music was Drake’s “No Friends in the Industry.” The lyrics even have an ode to her: “And I’m like Sha’Carri, smoke ’em on and off the track.”

Richardson isn’t the only attraction at the national championships, which run through Sunday at the stadium on the University of Oregon campus. Ryan Crouser is looking to surpass his own world record in the shot put, set at Hayward last year at the Olympic trials.

Allyson Felix, the most decorated female track athlete in Olympic history, is set to run in the 400 with a shot at making one more world team before her retirement.

Two-time Olympian Devon Allen, who played football and ran track at the University of Oregon, will try to improve his time in the 110 hurdles. He ran the third-fastest time in the world at the NYC Grand Prix.

Allen is trying to balance track life and football after recently signing with the Philadelphia Eagles as a wide receiver. There wouldn’t be a conflict should he make the world team: His event final is scheduled for July 17. Eagles players are slated to report for training camp nine days later.

Dalilah Muhammad announced on Wednesday that she is sitting out of the 400 hurdles because of a slight injury. She has already qualified for the world championships as the defending champion in the event.

Paul McGrath: Erik ten Hag should hold Ronaldo back and play him in super-sub role…

Eight is the perfect number for college football playoff expansion