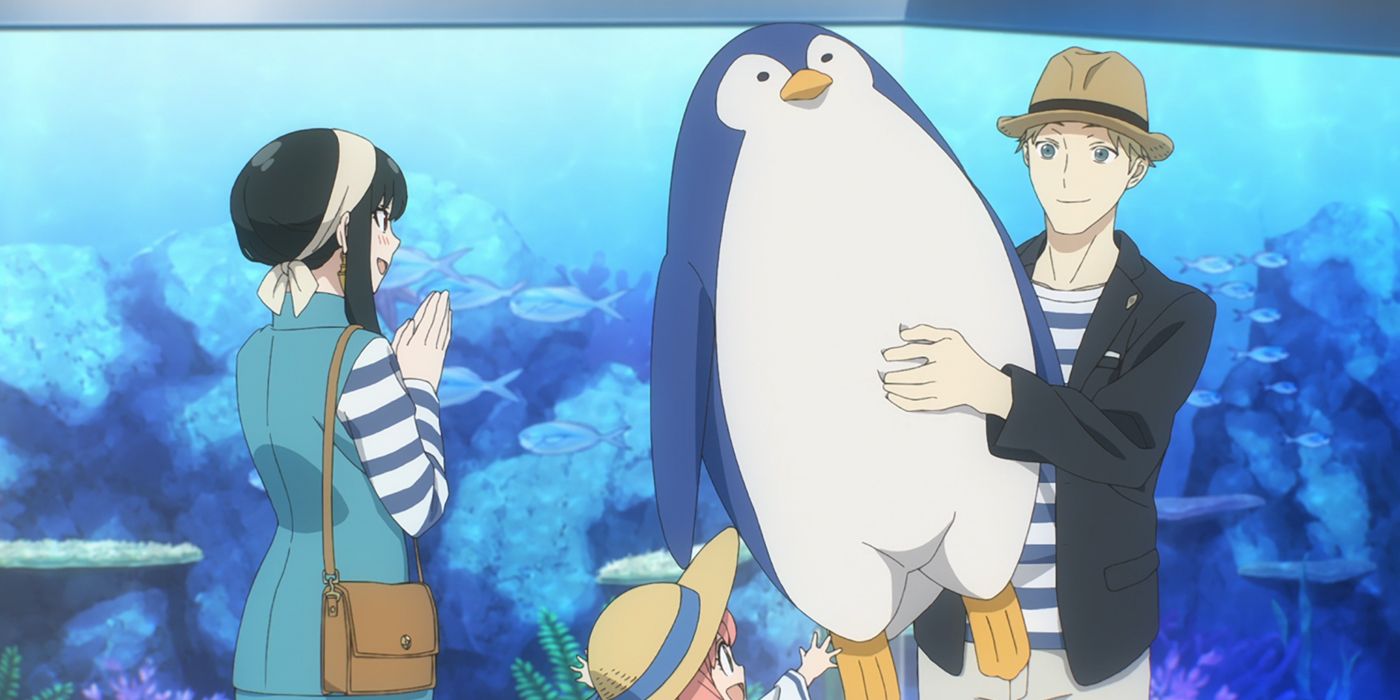 Loid Forger aka Twilight meets with another undercover WISE agent at a train station to receive a new assignment on top of Operation Strix. As Loid makes his exit, the undercover spy thinks to herself if the world will ever get better and if a time will come when spies are no longer needed. Elsewhere, Loid completes his new mission quickly and provides an update on Operation Strix to another superior officer before taking on more missions.

At the Forger household, Yor suggests to Anya that they eat out that day since Loid will be late from work. As Yor mentions how busy doctors can be, Anya reminds herself Loid is a spy. When Yor goes to wash the dishes, she thinks about her last kill from the previous night and how she can’t wash away the smell of blood from her hands. These thoughts from Yor don’t go unnoticed by Anya, which frightens her a little.

As Loid returns home exhausted from all his side missions, he hears his neighbors gossiping about his family in the hall of his apartment building. His neighbors speculate Loid is cheating on his wife and neglecting his young daughter, which Loid takes as a sign he’s slipping in his role as a husband and father. To rectify the situation and keep up appearances, Loid decides to invite his pretend family out somewhere for the weekend. He sees Anya drawing a penguin and suggests the family go to the aquarium next weekend. Loid then comments to himself he will manage his time better to ensure all his missions will be completed before their planned family outing.

When the next weekend arrives, a highly exhausted Loid still commits to the family outing despite Yor’s concerns about his lack of sleep. Outside their apartment, their neighbors comment on the rarity of seeing the Forgers go out as a family, though Anya confirms they are a normal family despite what they think. At the train station, Loid is once again summoned for another mission as Twilight, but this time, he tries to refuse the mission stating he has an important commitment to Operation Strix.

The moment Loid mentions his family outing to the Berlint aquarium, the undercover WISE agent at the train station communicates that his next mission is, coincidentally, at that particular aquarium. At Berlint Aqualand, Loid is to gather intel on a chemical weapon that threatens to endanger many lives within the country. The weapon itself is contained in a capsule that is hiding in the body of a penguin, and Loid is to retrieve the capsule before it lands in enemy hands. After learning the gravity of the situation, Loid has no choice but to accept the mission and work it into his family outing.

At Berlint Aqualand, Loid is stressed out by the fact he has to complete a new mission during a family outing. His stress is further exacerbated by the presence of two of his gossiping neighbors and their family. Loid wants to get away from them, but Yor invites them to hang out with their family to keep up appearances. Loid is not pleased with this arrangement but decides to go along with it for the sake of not arousing suspicion.

The two families go to the penguin exhibit at Loid’s suggestion so that he can complete his side mission unnoticed. Unfortunately for Loid, he’s unable to locate the penguin with the dangerous capsule without a tracker. Anya becomes aware of Loid’s concern and decides to help him out by reading the minds of the penguins. Her telepathy allows her to locate a sick penguin that’s struggling with something in its throat and is drinking a lot of water. Anya draws Loid’s attention to the sick penguin and Loid decides to investigate the sick penguin by disguising himself as an aquarium employee. He achieves this by taking on the likeness of an actual employee who is in charge of feeding the penguins.

During the penguins’ feeding time, Loid manages to impress his “supervisor” with his penguin feeding skills until he gets access to the penguin that has the capsule. Seeing that the penguin is sick, Loid excuses himself with the penguin to give it treatment. Once alone with the penguin, Loid locates the capsule but also sees the penguin has a red mark on its foot, most likely to indicate the penguin of interest to the enemy. As Loid is in the middle of this, he is interrupted by a strange man who wants to know what business he has with the penguin.

RELATED: Spy x Family Chapter 63 Warns Everyone to Think For Themselves

Suspecting the other man is the enemy, Loid explains he needs to treat the penguin, though the other man offers to do it for him. Loid turns him down stating only staff members can handle the animals, but this doesn’t persuade the man to go away. Instead, he shows Loid his ID confirming he is a marine biologist who works at the Berlint University. He also claims to be in charge of the marine animals at the aquarium. Loid gets a hold of the ID and gets it wet, which smudges the ink. This confirms to Loid the ID is fake and that the man is the enemy looking to retrieve the penguin.

With his cover lifted, the enemy makes a run for it, but Loid can’t chase after him since his first priority is the penguin. Anya — who witnessed the interaction between Loid and the other man — decides to help her dad by attaching herself to the enemy and make it look like an abduction. Anya’s plan successfully gets Yor’s attention, and the latter is able to stop the man from fleeing by kicking him through the ceiling, leaving him stuck there. This allows Loid to retrieve both the capsule and the intel he needs from the enemy Yor helped capture.

With the enemy apprehended and the capsule now in Loid’s custody, he wins a penguin plushie for Anya to convince his neighbors he is a good father, and they carry on with the rest of their day. Back at the Forger home, Anya plays a spy game with her new penguin plushie and gives it a tour of the house. When she tries to enter her parents’ bedrooms, she is immediately scolded by Loid since his room contains dangerous weapons that can harm her. This frightens and upsets Anya, which causes her cry. Loid tries to calm her down by pretending to be the toy penguin, and Yor pretends to be Anya’s toy robot. By resuming Anya’s game, Loid and Yor allow her to take them to the sweet shop to buy her a snack, which makes her happy.

Based on the popular manga series by Tatsuya Endo, new episodes of Spy x Family stream every Saturday on Crunchyroll.