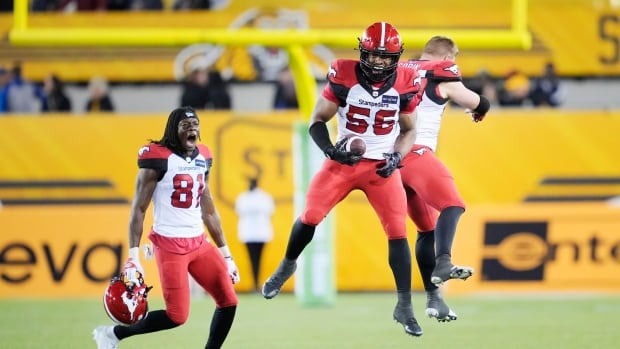 Bo Levi Mitchell wanted to sprinkle his Calgary Stampeders teammates with praise after his team overcame a 24-point deficit to defeat the Hamilton Tiger-Cats in overtime on Saturday.

The Stampeders (2-0) found themselves behind 24-0 late in the first half before they kicked into gear to score a 33-30 victory against the Ticats (0-2) in their home opener before 22,711 fans at Tim Hortons Field.

“I know a lot of people will be talking about our offence and me turning things around,” said Mitchell, who completed 28 of 42 for 313 yards, two touchdowns and an interception.

“But the defence stepped up. We had an interception to win the game, a strip on a quarterback sneak for a touchdown and Rene, that guy doesn’t get enough credit. He’s the best kicker in the game.”

Paredes went a perfect 4-for-4, including a game-tying 39-yard field goal as regulation time expired and a 35-yarder on Calgary’s offensive possession to begin overtime.

Calgary linebacker Jameer Thurman picked off Hamilton quarterback Dane Evans at the Calgary 17-yard line to end the game. Stampeders safety Titus Wall also had an interception in the third quarter and stripped Evans on a quarterback sneak in the fourth quarter.

Jameer Thurman seals the comeback for the Stampeders

The Stampeders erased a 24-point deficit to beat the Tiger-Cats 33-30 in overtime.

“We just kept preaching resiliency and making a play at the right time,” Wall said.

Evans didn’t want to make a commotion on the disastrous third and inches, but he felt the whistle should have been blown before Wall made his big play.

“I’ve done those a million times, and that play was over,” Evans said. “Every one of them, always. As soon as the quarterback gets the first, it’s over. They never let it linger. It is what it is. That was definitely a big turning point. That was probably the biggest momentum shift.”

Evans vowed to be better after the Ticats’ fourth-quarter collapse in their season opener in Regina against the Saskatchewan Roughriders last week. That appeared to be the case in the first half, playing behind a revamped offensive line.

He tossed three touchdowns in the opening two quarters and finished with 425 throwing yards, completing 36 of 51.

“It’s disappointing,” Ticats head coach Orlondo Steinauer said. “It’s going to sting, and it should. We didn’t finish. We had opportunities and didn’t do it.”

Wall picked off Evans in the end zone early in the third quarter. On Hamilton’s next possession, they were stopped on third down at Calgary’s nine-yard line when Thurman stopped a quarterback sneak from Matt Shiltz.

The Stampeders lost running backs Charlie Power and Peyton Logan to injuries in this outing.

After Evans’ first-half touchdown passes to Sean Thomas Erlington, Steven Dunbar and Tim White, Mitchell pulled aside his receiving corps in the locker room to talk about a comeback.

The bid stalled early in the third quarter when Ticats defensive back Javon Santos-Knox intercepted Mitchell.

“I lit a fire in myself after the pick,” said Mitchell, who tossed touchdowns to Reggie Begelton and Luther Hakunavanhu in the third quarter.

Pride Month 2022: What is the Commonwealth doing to LGBTQ persecution?

Saluting some of the best dads in TV history