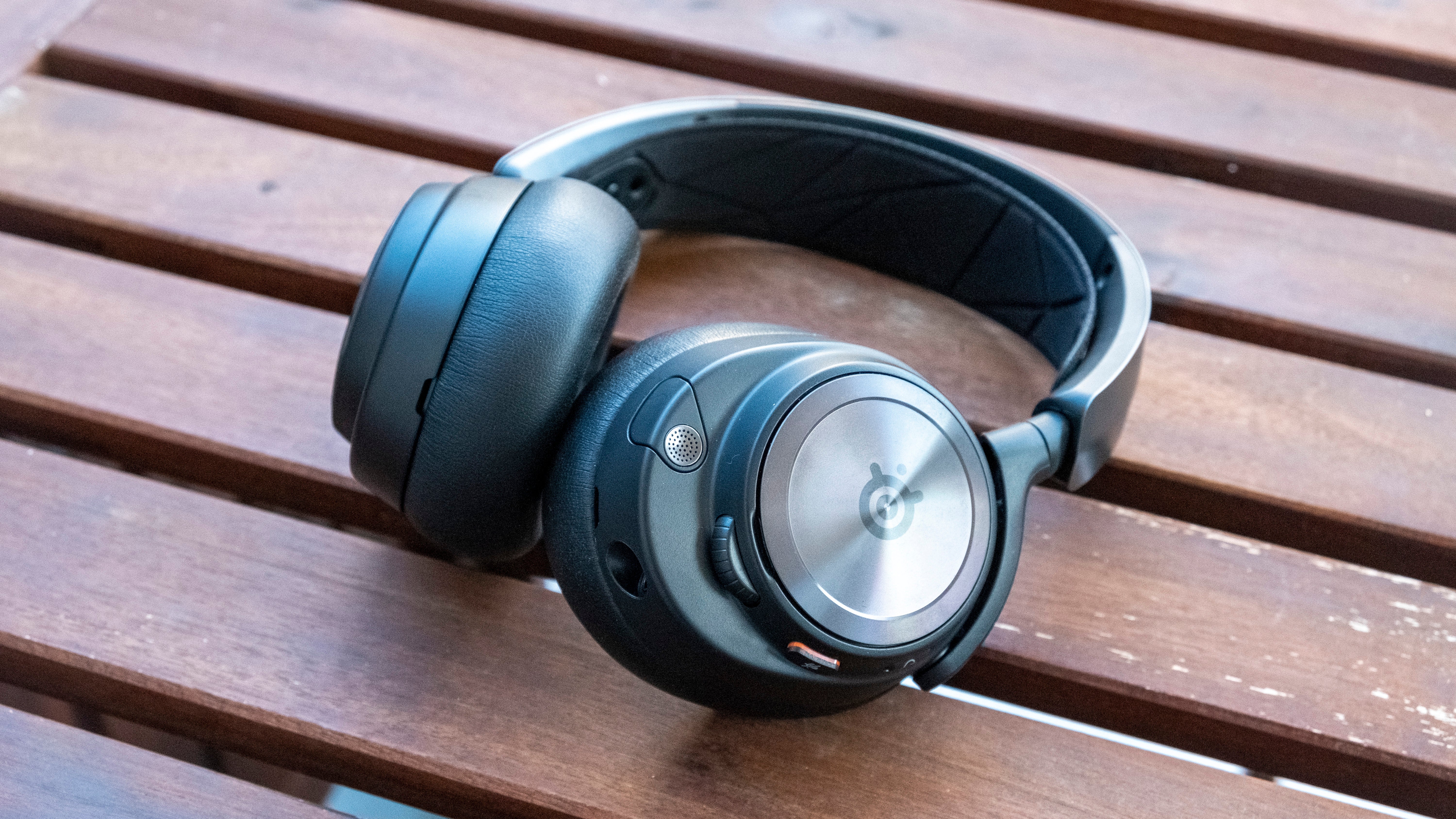 For a long time, the SteelSeries Arctis line of headsets has appeared at the top of our list of gaming headset recommendations. They’re an easy and popular pick: comfortable, great-sounding and available in a wide range of formats to suit all manner of platforms, connection types and budgets. But five years after the first Arctis headsets were revealed, the overall formula hasn’t changed much – and so, it’s time for something new. That something is the Arctis Nova Pro, a timely redesign that recaptures the line’s strengths while also marking the most substantive evolution in its history.

The £250/$250 Arctis Nova Pro and £330/$350 Arctis Nova Pro Wireless are high-spec, feature-rich, all-platform headsets, so I’ll focus on what I believe are the most meaningful changes and additions. These include a more comfortable and adjustable design, improved dual-input base stations and better sound – plus active noise cancelling and a convenient dual battery system for the Nova Pro Wireless model.

The Nova Pro and Nova Pro Wireless both come in Xbox and not-Xbox flavours due to Microsoft’s weirdness around Xbox compatibility. All models support two inputs, so on the Xbox models you get one dedicated ‘Xbox’ port and one ‘anything else’ port; on the non-Xbox models you get two ‘anything else’ ports – so the Xbox model is ideal if you want to be covered on PS5 and Series X/S. We tested the wired Xbox and wireless not-Xbox models.


Let’s look at the Nova Pro’s design first. The look is very reminiscent of the earlier Arctis models, complete with a fabric suspension headband, but SteelSeries audio czar Brian Fallon says it was redesigned from scratch – albeit to fairly similar principles. The dense plastic frame is a different shape and more adjustable to ensure it gets a good seal around the ears – one of the few complaints levelled at the original design was that achieving that seal could be difficult for some folks, leading to inconsistent sound.

The athletic fabric used for the earpads in the previous lineup has also changed to a leatherette for the same reason – although I’d gladly sacrifice a bit of sound quality for cooler and more glasses-friendly velour if I was given the option. The headband now has three fit ‘settings’ to accommodate a wider range of skulls, and the earcups fold flat to rest more comfortably on your shoulders.

Outside of comfort, there are other tweaks too, with circular metal discs on each earcup that conceal the wireless model’s swappable battery and USB-C charging ports and a microphone that now retracts fully to become flush with the headset. The whole assembly feels incredibly robust and more premium, which points us towards an overall design goal of producing a headset that makes sense out in the world rather than just next to your gaming platform of choice.


The active noise cancelling on the wireless model can be wrapped into a greater theme of ‘lifestyle’ compatibility that make the Nova Pro much more useful when it’s away from a video game system than its predecessors were. Like the Arctis 9X, the Nova Pro Wireless supports both 2.4GHz wireless via a base station (for low-latency scenarios like gaming) and direct Bluetooth (for wider device compatibility and use on the go). Both wireless methods can be used independently, with separate controls, and the two can be used in concert, eg if you want to chat to someone on your phone while playing your console.


I tested the ANPW on a couple of flights, and found that the ANC is great at removing deeper, duller sounds, but struggled to drown out closer conversations and the whine of the engines. I also noticed that the angle of my head made a big difference – lying back was the most effective, ANC-wise, while leaning forward caused the engines to become noticeably louder. Still, enabling it made a positive difference, and longevity was solid at around 20 hours per battery – even if recharging via USB-C looks a bit weird as the port is in the centre of the left earcup, giving the headset mild Apple Magic Mouse vibes.

The only major issue I encountered was the lack of a mobile app, as there’s no way to adjust settings on the go when you’re using the headset in Bluetooth mode alone. Right now, you need to connect the headset to its base station to make changes to the EQ, side tone and so on, which isn’t really convenient for holidays. There is at least a soft case provided with the ANPW to make throwing it in your bag a little less nerve-wracking.


While mobile use is much improved, the Nova Pro and Nova Pro Wireless are still at their best at home thanks to the base stations that accompany each unit. The wired model contains a powerful Sabre quad-DAC which provides a noticeable uplift to sound quality versus using the headset via a 3.5mm cable, while the wireless base station pumps out reliable 2.4GHz wireless to a surprising range while charging your second battery, ensuring you never have to wait for the headset to recharge in normal use. Changing batteries takes half a minute, and if you put the new battery in quickly enough it’ll power up automatically to save you a further button press.


On wired and wireless models, you get the ability to change the sound profile via preset and custom EQs, adjust the game/chat mix (on PC/Xbox) and swap between the two USB-C inputs that run to your PC or games console of choice. The base stations are clever enough to swap to the other input if they detect the current input has lost power (eg you’ve turned off your console), but if you use sleep mode then you’ll have to make the change yourself. Thankfully, the comfortably large knob and smaller circular button are convenient enough to operate quickly. The base stations are also just pleasant pieces of kit to have at your desk, with relatively high refresh rate displays reflecting the current sound levels on each channel, the set volume, the active input and battery levels for both batteries. (When photographing the base stations, I did notice that these displays are far from flicker free – not likely to be an issue for something you glance at occasionally I suppose!)


We haven’t discussed sound quality yet, but perhaps we’re saving the best for last. The wired model offers perhaps the best sound I’ve experienced outside of a planar magnetic headset for years, with a similar overall sound signature to earlier Arctis models – relatively neutral, with plenty of width and detail but a brighter vibe overall. I was picking up instruments and background vocals that I’d never noticed before, even in albums like London Calling that I’ve listened to hundreds of times before, and that’s certainly the mark of a special headset.

The Nova Pro Wireless is a little more ordinary in that respect, but it’s still one of the best-sounding wireless headsets I’ve used. If you’re not a fan of the default mix, then changing to something more V-shaped or bass-heavy takes only a few seconds with the base station, and the Sonar feature built into the SteelSeries engine software allows you to craft even more detailed parametric EQs – that eventually will be shareable amongst other users, which could be great for crowd-sourcing EQs for specific games. Simulated 7.1 surround sound is also offered – something SteelSeries call ‘360° Spatial Audio’ – and the headset is also compatible with various 3D audio solutions offered on PS5, Xbox and Windows. Personally, I prefer simple stereo with in-game HRTF, but you do you!

Finally, mic quality. As usual, the wired version performs better than the wireless, and you do really need to bring the pull-out mic in front of your mouth to get good results – leaving it in looks cleaner, but makes you sound understandably distant. Thankfully, it stays in position well, and sounds reasonable too – not the best I’ve tried, but not the worst either. There is also AI noise cancelling available via the GG app on Windows, which makes the mic much better in louder environments. I had no problems using the mic for conference calls and Counter-Strike sessions, even without the software running, but I’d still opt for a proper USB or XLR mic for anything like streaming or recording VO.


So: a comfortable fit that should suit more people, better base stations with dual inputs and a lifestyle focus with a robust build, USB-C charging and ANC on the wireless model. It’s all pretty impressive stuff, but of course it comes at a cost – the Arctis Nova Pro and Arctis Nova Pro Wireless are considerably more expensive than the (now heavily discounted) Arctis Pro and Arctis Pro Wireless. By and large, that increase in price is reflected in the better build and added features, but if you don’t need those improvements – you just want a good comfy headset for a single PC or console at a time – then the earlier models are a better value. However, as the PS5, Xbox Series and Nintendo Switch consoles are all getting cheaper (or at least more readily available), I think there is a market that will be able to really enjoy all of the new features and for which the Nova Pro headsets make sense.


If you don’t need a headset to take out with you into the world, then the wired Arctis Nova Pro sounds better than its wireless counterpart and costs less – this is probably what I’d pick up if I were in a different line of work that didn’t feature gaming headsets appearing as if by magic in the post. However, the Arctis Nova Pro Wireless feels like the ultimate form of the new design, a true do-anything headset that puts up a genuinely good showing against the best headsets in multiple categories. Its ANC isn’t quite on the level of the best from Bose or Sony, but it’s also a dramatically better gaming headset than anything those companies have produced. Against the likes of Razer and Corsair, the Nova Pro models also impress, even if the competition is a bit tighter.

The back to basics approach has really worked for SteelSeries here, and I’m hoping to see some of these design improvements filter down to more affordable headsets soon – not everyone can drop £250 on a gaming headset, but if you can you’re in for a treat.

Disclosure: SteelSeries paid for flights and accommodation to see the Arctis Nova Pro headsets prior to launch.

Did I miss anything you wanted to know about these headsets and how they work? Hit me up in the comments below; I’ll stick around to answer questions for a few days at least!

Next FFXIV expansion not planned for 2023, Square Enix confirms