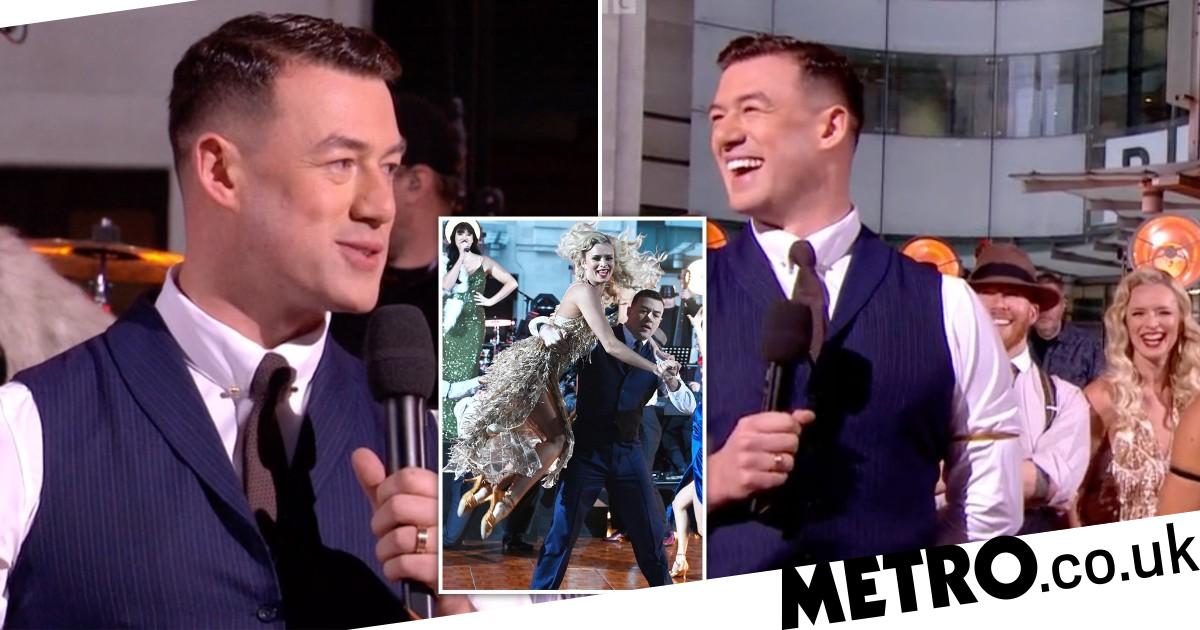 Strictly Come Dancing pro Kai Widdrington tried hard to play it cool after being asked by Zoe Ball whether he and Nadiya Bychkova have gone ‘official’ with their rumoured romance.

A group of the BBC show’s professional dancers appeared on Friday night’s edition of The One Show hosted by Zoe and Ronan Keating, ahead of their upcoming tour.

Faces such as Dianne Buswell and Karen Hauer strutted their stuff for fans at the end of the show, to give a taster of what could be expected during their live shows.

However, there was also something else on host Zoe’s mind, when she got chatting to Kai about what fans could expect.

Kai laughed off Zoe’s comments and remained coy, as the presenter went on to add: ‘Sorry! Let’s talk about the tour.’

His fellow pros also saw the funny side in Zoe’s need for gossip, as Kai responded: ’This is going to be all-out dancing. This show has been two years in the making so we’re finally going to get out on the road.

‘We’re all so excited to perform in front of a live audience in a theatre, so it’s a bit more up close and personal.’

He went on to share: ‘We’ve been working really hard to get it on the road, so you’ll see a little bit of it tonight and yeah, come and see us!’

Karen weighed in: ‘You’ll get to know us a little bit better. Knowing our quirks, our love for dance, we have a lot of quirks – it’s going to be a fantastic show. It’s really hard to learn a script!’

The pair also got close during the routine, while delivering a masterclass in Strictly excellence for those watching at home.

Kai, 26, and Nadiya, 32, became subject of romantic speculation earlier this year, after they were spotted looking cosy on the show’s yearly tour.

Earlier this month, Nadiya shared a snap on her Instagram stories appearing to hold hands with Kai as they dined out at The Ivy in London – although his face was not visible in the picture.

Days later, they were snapped leaving tour rehearsals in north London, where they could be seen putting on a sweet display as they held hands and headed out for the evening.

The dancing duo have reportedly been dating since January, shortly after Nadiya split from her ex-fiancé Matija Škarabot.

It’s thought the new couple are sharing a London home now Nadiya is back in the UK after travelling to Slovenia to see daughter Mila, according to The Sun.

It’s already been confirmed they will both be returning to the 2022 series of Strictly Come Dancing, so fans will soon get to see more of the pair on-screen.

The One Show airs weekdays from 7pm on BBC One.


MORE : Romeo and Duet viewers plead for Oti Mabuse to return to Strictly and for ITV to ‘cancel’ new dating show: ‘Petition to get Oti back on a dance show’