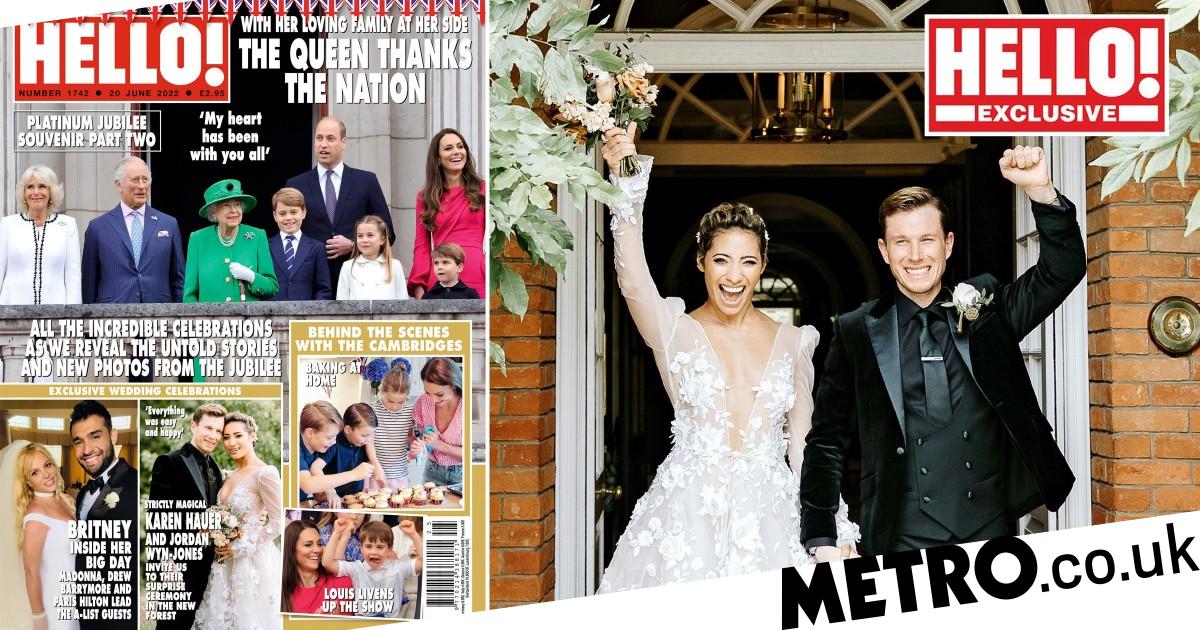 Strictly Come Dancing pro Karen Hauer surprised everyone recently with an announcement that she had married parter Jordan Wyn-Jones – and we finally have all the gorgeous pics!

The dancer enjoyed her big day in the countryside in Hampshire, with close friends and family in attendance – including fellow Strictly stars Janette Manrara and Luba Mushtuk as bridesmaids.

Karen looked stunning as she walked down the aisle wearing a handmade wedding dress by Berta, which she described as her ‘fairytale dress’ which she knew was ‘The Dress’ the moment she tried it on.

The newlyweds had beaming smiles on their faces throughout their big day – which took place on Tuesday, June 7 at the luxurious country retreat of Chewton Glen.

Speaking to Hello! Magazine, Karen, 40, gushed over her magical day, saying it was everything she hoped it would be and more.

‘It was exactly what we had envisioned – but even better. It was like a breath of fresh air for us. Everything was easy and happy,’ she began.

‘I think people will be surprised by the news. Having recently been on tour with Strictly, I couldn’t talk about the wedding out loud, it felt precious to have our little secret in our back pocket, but it’s nice to come out and say, “Hey, we’re married!”‘

Meanwhile, new husband Jordan, 32, spoke of the emotional moment he saw his wife-to-be heading towards him at the end of the aisle.

‘The second I turned around and caught a glimpse of her, I started welling up. It was something I’d been looking forward to for a while. She looked incredible,’ he said lovingly.

Karen and Jordan also opened about about the early days of their romance, after they met in 2020 when Jordan was based in Australia for work and they stumbled upon one another on social media.

‘Jordan followed me on Instagram and I followed back – we would like and comment on each other’s posts. Never did I think that I would find the love of my life on the other side of the world and that we would meet in such a unique way,’ Karen said, adding that she ‘wouldn’t change it for the world.’

‘I knew I was going to marry Karen the first day I met her, but I thought it’d be a bit weird to turn up at her front door and ask then,’ joked Jordan, who proposed in December.

The adorable pair went Instagram-official last July and have been giving fans a look inside their relationship ever since, often sharing sweet pics of each other.

This was Karen’s third time tying the knot, as before she was with Jordan the star was previously married to former dance partner Matthew Hauer until 2009, and then to Strictly pro Kevin Clifton from 2015-2018.

She then went on to date opera singer David Webb for two years, however they are said to have ‘quietly split’ in September 2020.