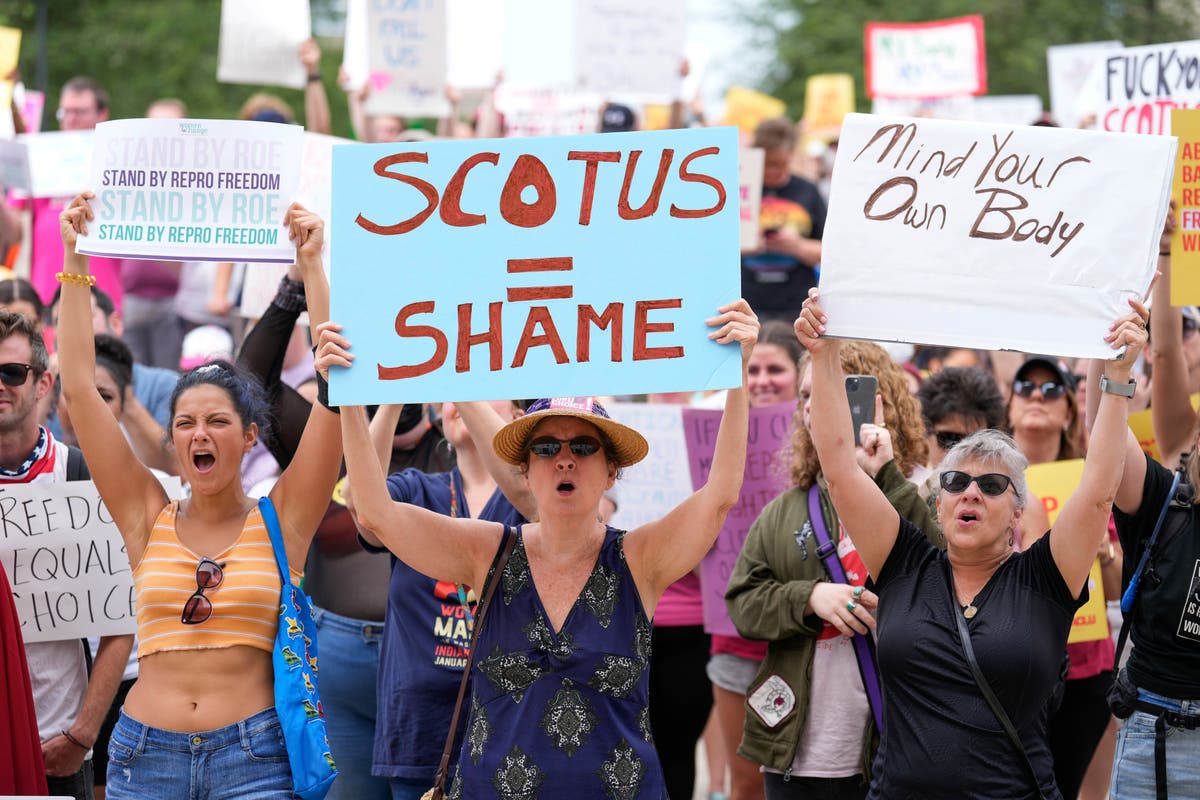 Americans were taking stock a day after the Supreme Court ended constitutional protections for abortion that had been in place nearly 50 years.

The AP plans the following coverage. You can find all our Supreme Court-Abortion coverage in the APNewsroom hub.

A Supreme Court-Abortion-Localize It guide also is available.

SUPREME COURT-ABORTION-NO ROE — Americans were taking stock a day after the Supreme Court overturned a woman’s constitutional right to an abortion, as states began implementing their own bans and abortion supporters and foes mapped out their next moves. The depth of emotion unleashed by Friday’s decision led to protests and prayer vigils across the country, with Arizona lawmakers even hiding in a basement for a time while police fired tear gas into a crowd. By Leah Willingham and Scott Bauer. UPCOMING: 800 words by 4 p.m., photos, video, audio.

SUPREME COURT-CONSERVATIVE MUSCLE — Sweeping Supreme Court rulings on guns and abortion sent an unmistakable message. Conservative justices hold the power and they’re not afraid to use it to make transformative changes in the law, none more so than taking away a woman’s right to abortion that had stood for nearly 50 years. By Mark Sherman and Jessica Gresko. SENT: 940 words, photos.

ELECTION 2022-ABORTION — Democratic officials across the nation hope to harness their party’s collective outrage and sadness to improve their political outlook this fall after the Supreme Court’s stunning decision to overturn Roe v. Wade. By Steve Peoples and Mike Catalini. SENT: 1,230 words, photos. With US–ELECTION 2022-WISCONSIN-DEMOCRATS — Wisconsin’s Democratic Gov. Tony Evers hopes to translate anger over the U.S. Supreme Court’s overturning of Roe v. Wade into votes this fall as he vows to fight a 173-year-old state abortion ban in any way he can. SENT: 599 words, photo.

SUPREME-COURT-ABORTION-GUNS — They are the most fiercely polarizing issues in American life: abortion and guns. And two momentous decisions by the Supreme Court in two days have done anything but resolve them, firing up debate about whether the court’s conservative justices are being faithful and consistent to history and the Constitution — or citing them to justify political preferences. By Kate Brumback, Adam Geller and Michael Tarm. SENT: 1,010 words, photos.

SUPREME COURT-ABORTION-COMPANIES — The Supreme Court’s decision to end the nation’s constitutional protections for abortion has catapulted businesses of all types into the most divisive corner of politics. By Anne D’Innocenzio and Haleluya Hadero. SENT: 1,240 words, photos.

SUPREME COURT-ABORTION-HOW WE GOT HERE — The wait after the leak of the decision overturning Roe v. Wade has come to an end — nearly two months in which abortion and all of its complexities have been have been hashed and rehashed, while the U.S. Supreme Court was silent. A story comprised of links to AP coverage of the abortion issue leading up to this moment. SENT: 431 words, photo.

SUPREME COURT-ABORTION-STATE-SUMMARIES — An overview of abortion legislation and the expected impact of the court’s decision in every state. SENT: 14,080 words, photos.

EU–FRANCE-ABORTION — A group of lawmakers belonging to French President Emmanuel Macron’s party will propose a bill to inscribe abortion rights into the country’s constitution, according to the statement by two members of parliament on Saturday. The move comes after the U.S. Supreme Court overturned a 50-year-old ruling and stripped women’s constitutional protections for abortion. SENT: 387 words.

We are outside The Supreme Court live and will have edits of that video. We are also monitoring reaction and rallies in Pennsylvania and Los Angeles, as well as other places around the nation.

-Also efforting video of U.S. Women’s National Team vs. Colombia in soccer match in Commerce City, Colo., during which U.S. players plan to hold an on-field protest over the Supreme Court’s ruling that ended constitutional protections for abortion.

-Washington state Gov. Jay Inslee, joined by elected officials and healthcare providers, holds a press conference at the state Capitol in Olympia in response to the U.S. Supreme Court ending constitutional protections for abortion. News conference is at 1 p.m. EDT.

— Soundbites from President Biden at the gun bill signing.

— Reaction from real people from all sides of the issue will move throughout the day.

Photos is outside The Supreme Court in Washington. We also will have coverage of an anti-abortion rally in New York City at 2 p.m.