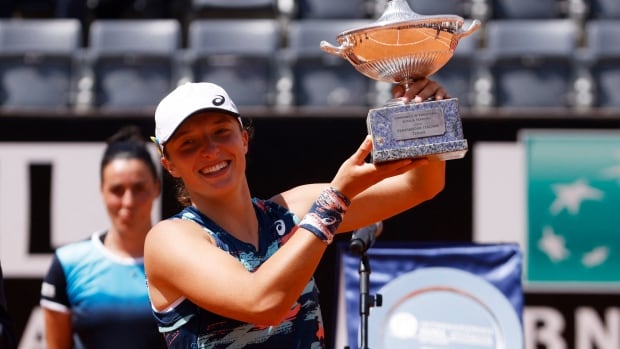 Iga Swiatek is going into the French Open on quite a run.

The top-ranked Swiatek overwhelmed Ons Jabeur 6-2, 6-2 to defend her Italian Open title on Sunday and extend her winning streak to 28 matches.

Swiatek was a surprise champion at the French Open in 2020 when she was ranked No. 54. Now the 20-year-old Polish player is the favourite to add a second title at Roland Garros when the year’s second Grand Slam starts next Sunday.

Swiatek has won five straight titles during her run.

Jabeur was on a streak of her own with 11 consecutive wins entering the final after her Madrid Open title last week but the Tunisian’s crafty game of drop shots and spins proved no match for Swiatek’s swift movement and accurate groundstrokes.

Swiatek took control right from the start, breaking Jabeur’s serve in the second game of the match with a mix of finesse and power.

Swiatek won one point in that second game with a forehand lob winner after drawing Jabeur forward with a well-placed drop shot, then on her first break point she took a huge swipe at a second serve that Jabeur couldn’t control.

Swiatek also kept her composure when she saved four break points at a crucial point late in the second set, sliding in to reach a drop shot then responding with a splendid backhand volley drop winner on the final break point after a 19-shot rally.

When a backhand from Jabeur landed in the net to end it, Swiatek sunk down to the clay and covered her face with her hands as she bent over toward the clay court.

The last player to win more consecutive matches was Justine Henin, who won 32 straight over 2007 and 2008. The all-time longest streak belongs to Martina Navratilova, who had a run of 74 in 1984.

Swiatek last defeat came in mid-February in Dubai to Jelena Ostapenko in a third-set tiebreaker. She has won 42 of the last 43 sets she’s contested.

During the women’s final, a fan held up a sign that read, “Kick politics out of tennis,” — an apparent reference to Wimbledon’s decision to ban players from Russia and Belarus because of the war in Ukraine.

Swiatek played with a ribbon attached to her hat featuring the colors of Ukraine’s flag.

Later on the red clay court at the Foro Italico, Novak Djokovic was playing Stefanos Tsitsipas in the men’s final.

Ottawa’s Gabriela Dabrowski and partner Giuliana Olmos of Mexico are taking on Russia’s Anastasia Pavlyuchenkova and Veronika Kudermetova in the doubles final.

Dabrowski and Olmos are coming off their first doubles title of the season at the Madrid Open last week.