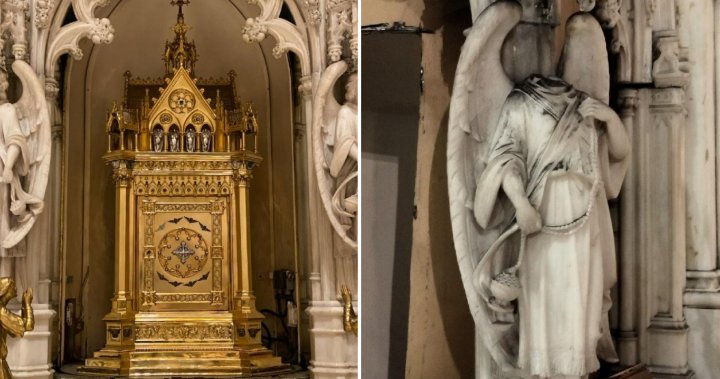 A Catholic Church in Brooklyn, N.Y., fell victim to a heist last week where thieves stole a tabernacle valued at US$2 million and decapitated two marble statues of angels flanking the altar.

Various heavy duty power tools were used to “forcefully cut open” a portion of the altar to remove the 18-karat gold and silver, bejeweled tabernacle — an ornamental cabinet housing the eucharist, or holy communion — a sacred Christian sacrament — from its stationary place, the New York City Police Department said.

Church officials have called the theft, which is suspected to have taken place Friday at St. Augustine Roman Catholic Church, “a brazen crime of disrespect and hate.”

According to a press release from the Diocese of Brooklyn, the tabernacle was made in the 1800s when the church was built, and despite its apparent $2-million appraisal, “is irreplaceable due to its historical and artistic value.”

The diocese also claims the eucharist that was stored inside the tabernacle was “thrown all over the altar.”

“This is devastating, as the Tabernacle is the central focus of our church outside of worship, holding the Body of Christ, the Eucharist, which is delivered to the sick and homebound,” said Father Frank Tumino, pastor of St. Augustine in the press release. “To know that a burglar entered the most sacred space of our beautiful Church and took great pains to cut into a security system is a heinous act of disrespect.”

In another publication by the diocese, Tumino said he discovered the destruction on Saturday when he went to hear confessions at another nearby parish and saw the door to St. Augustine slightly ajar.

Upon entering the church, Tumino smelled the burnt metal from the use of power tools and discovered the destruction.

Along with the beheaded angel statues, Tumino claims other marble fixtures were shattered as the burglars attempted to pull the tabernacle free from its anchors.

Tumino called the extraction “quite violent,” though he had no information to indicate this was a hate crime. He also hypothesized that there must have been more than one thief to be able to carry the heavy object out of the church.

The priest told reporters that though the church has exterior and interior security cameras, the perpetrators also stole part of the video recording system.

A safe in the church’s sacristy — a room where various worship items are housed — was also cut open, but nothing was inside.

As of Tuesday, no arrests have been made in connection to the theft.

The NYPD has asked the public for any tips or information relating to the robbery and destruction.