Takeaways from the first round of France’s parliamentary elections 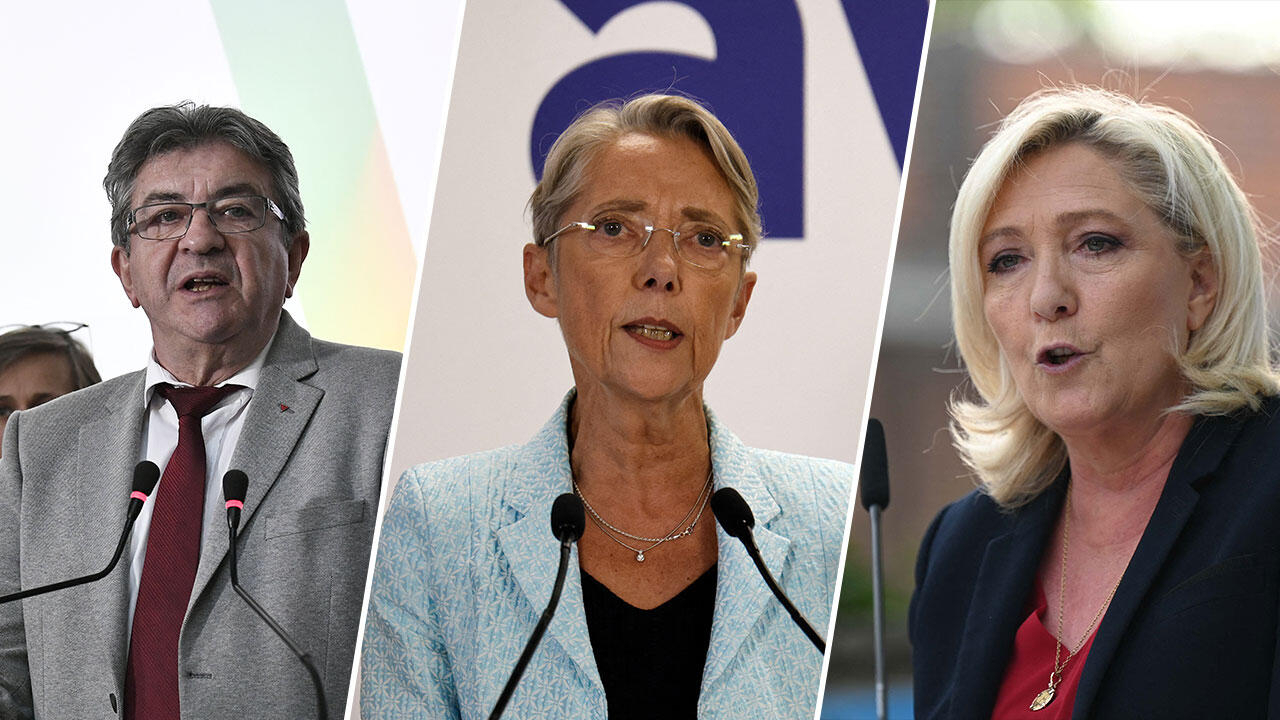 French voters went to the polls Sunday in the first round of parliamentary elections, with all 577 National Assembly seats at play. The left-wing NUPES coalition came out neck and neck with Emmanuel Macron’s presidential group, while Marine Le Pen’s National Rally and the right-wing Républicains trail behind. Here are the major takeaways from Sunday’s vote.

In the seven weeks since Macron was reelected president in a runoff against far-right Le Pen, France’s political landscape has shifted. A new alliance between the four largest left-wing parties made the left, rather than the hard right, the main challenger to the presidential coalition in the race for France’s 577 parliamentary seats. On Sunday, that dynamic was borne out as Macron’s coalition virtually tied with the NUPES bloc, led by leftist firebrand Jean-Luc Mélenchon, even amid record-low turnout.

So what are the main takeaways from Sunday’s vote? FRANCE 24 breaks down the results, looking ahead to next weekend’s decisive second round.

Macron’s coalition is looking far weaker than in 2017, when it dominated the first round and went on to win a commanding majority of seats. This time, its vote share (25.75 percent) was all but matched by the united left (25.66 percent), with just 21,000 ballots separating the two, according to official results published by the Interior Ministry.

Next up is Le Pen’s National Rally with 18.68 percent. Far-right candidates largely failed to capitalise on Le Pen’s success in the presidential election, in which she claimed more than 40 percent in the second round.

Nevertheless, Sunday’s vote does promise a significant boost for Le Pen’s party in parliament. The National Rally currently has just eight seats in the National Assembly, short of the 15 needed to form a parliamentary group – a prerequisite to having any real weight in the chamber. That is likely to change next Sunday, with the National Rally projected to win anywhere from 20 to 45 seats, according to FRANCE 24 polling partner Ipsos/Sopra Steria.

>> French legislative elections: The first round, by the numbers

By contrast, Les Républicains are set to lose up to half of their seats. The party won 10.42 percent on Sunday – better than the 4.78 percent claimed by their presidential candidate Valérie Pécresse in April, but nevertheless a sharp drop for the party that for decades was the standard bearer of the French right.

No other party won more than 5 percent.

Key to the second round will be turnout. Sunday’s vote saw a new record low for electoral participation, with 52.49 percent of registered voters staying home. Left-wing leaders are seeking to rally much greater turnout next week, with the expectation that France’s disaffected are more likely to vote for them than the governing coalition.

Macron hopes to hang on to a majority

With such an open-ended result in the first round, the stakes next Sunday will be high. The two leading coalitions are both touting their chances of winning an absolute majority (289 of 577 seats). The latest projections, however, suggest that both could well fall short – a highly unusual scenario for the Fifth Republic.

According to the latest Ipsos/Sopra Steria projections, Macron’s coalition could win anywhere from 255 to 295 seats. NUPES is projected to win between 150 and 190.

The goal for the left is to force Macron into “cohabitation”, winning an unlikely majority and forcing him to appoint members of the NUPES coalition as government ministers. Current projections make that scenario look unlikely, but the left has a strong chance of imposing itself as the dominant parliamentary opposition and making it much harder for Macron’s group to pass laws unilaterally.

“The truth is that the president’s party is beaten and defeated,” Mélenchon said on Sunday night.

On the other end of the spectrum, Les Républicains will be looking to hang on to as many as possible of their current 101 seats. Ipsos/Sopra Steria projections put them at 50 to 80 seats, followed by the National Rally with 20 to 45.

Only a handful of candidates won their seats outright in the first round: four for NUPES, and one for Macron’s coalition.

Marine Le Pen came close, winning an absolute majority (53.94 percent) in her run for reelection in the northern Pas-de-Calais region. She will still head to a runoff next week, however, because of low turnout: Candidates need the support of at least a quarter of a registered voters to skip the second round, a threshold Le Pen failed to clear. She will face NUPES candidate Marine Tondelier, who took 23.43 percent in the first round.

Perhaps the most notable loser on Sunday was far-right pundit Eric Zemmour, who attracted vast media attention in the presidential race but has so far flopped as a candidate. Zemmour failed to advance to the second round on Sunday in his bid for a seat representing Saint Tropez. Nationally, his Reconquest party won just 4.24 percent of the vote, and did not send a single candidate to the run-offs.

Jean-Michel Blanquer, who until recently served as Macron’s education minister, also faced a stinging defeat, coming in third behind the National Rally’s Thomas Ménagé and NUPES’ Bruno Nottin in his race in central France.

Two current ministers are also in precarious positions: environment minister Amélie de Montchalin and European affairs minister Clément Beaune, who both came in behind NUPES candidates in their races. If they don’t win their runoffs next Sunday, they will lose their seats in government.

Other ministers fared better. Prime minister Élisabeth Borne, who had never before run for office, came out roughly 10 points ahead of the NUPES candidate in her bid for a seat in the northern Calvados region. Interior minister Gérald Darmanin also made it comfortably into the second round, as did Damien Abad, minister for Solidarity and the Disabled, who is facing rape accusations. Abad will face NUPES candidate Florence Pisani in the second round.

No sitting minister failed outright to make it into the second round.

On the nationalist right, former presidential candidate Nicolas Dupont-Aignan came in first in his race, while Florian Philippot, once a close Le Pen ally, fell far short of the runoff with 4.62 percent.

TV presenter Cherry Healey, 41, on her fight to stop menopause being a ‘taboo…

Why having an unpredictable childhood can be traumatizing