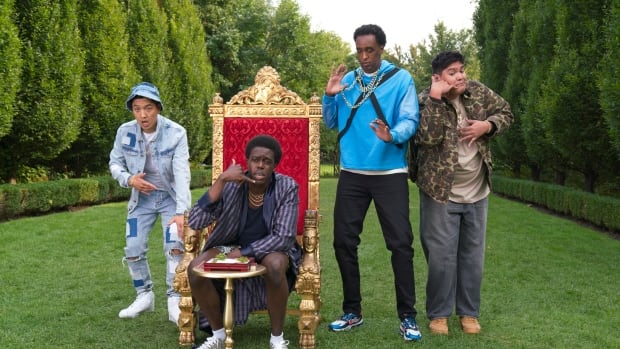 The absurdist — and absurdly funny — sketch comedy series TallBoyz racked up a respectable four prizes at the Canadian Screen Awards on Thursday, asserting itself in the Canadian television landscape just a few weeks after CBC aired its third season.

Meanwhile, CTV’s medical drama Transplant swept the drama categories — and the scripted program and performance awards in general — with five wins, including those for best supporting actress in a drama and best writing in a drama series.

The awards, which are administered by the Academy of Canadian Cinema and Television to celebrate excellence in film, television and digital media, have been ongoing since Monday. The week-long affair will conclude on Sunday evening with a televised awards ceremony.

Earlier this week, nominees in the broadcast news, documentary, sports programming, digital and immersive media, children’s and animation, and lifestyle and reality categories received accolades for their work.

Thursday’s event was a celebration of the small screen, as nominees were recognized for their work in the drama and comedy crafts and the scripted programs and performances categories.

The wins for TallBoyz Season 2 come shortly after the show’s Season 3 finale aired last month. It was previously nominated for a Canadian Screen Award in 2020, when it competed for best writing in a variety or sketch comedy series.

The show follows a comedy troupe of four men (all of them tall, as the title suggests) while they get up to various hijinks around Toronto and skewer everything from the cancellation of Trickster to the Royal Family.

WATCH | The trailer for Season 2 of TallBoyz:

Wins for Transplant, Sort Of

Transplant, which stars Hamza Haq, follows Bash Hamed, a Syrian civil war refugee who moves to Canada and begins a new life as an emergency room resident in a Toronto hospital.

The series was ordered for a third season at CTV in February. It won best writing in a drama series for Joseph Kay’s Season 2 finale script “Free for What,” and best picture editing in a drama for Annie Ilkow’s work on the episode “Contact.” Pierre Gill won best photography in a drama for the season premiere, “Guardrail.”

In its inaugural season, CBC’s coming-of-age comedy Sort Of won two awards. Co-creators Bilal Baig and Fab Filippo won the award for best writing in a comedy series, while Jessica Carter and Steve Newburn accepted prizes for best achievement in makeup for the episode “Sort Of Back Again.”

WATCH | The trailer for coming-of-age comedy-drama Sort Of:

In addition to working behind the scenes, Baig stars in the show as Sabi Mehboob, a genderfluid millennial who straddles various identities as a bartender, a babysitter for a dysfunctional family, and the son of Pakistani immigrants. The show was renewed for a second season earlier this year.

For the third year in a row, the Canadian Screen Awards will be presented virtually. A capstone ceremony will air Sunday on CBC-TV and CBC Gem.

CBC winners in the drama and comedy crafts and the scripted programs and performances categories:

Other notable wins from these categories:

A mother and daughter helping each other deal with anxiety