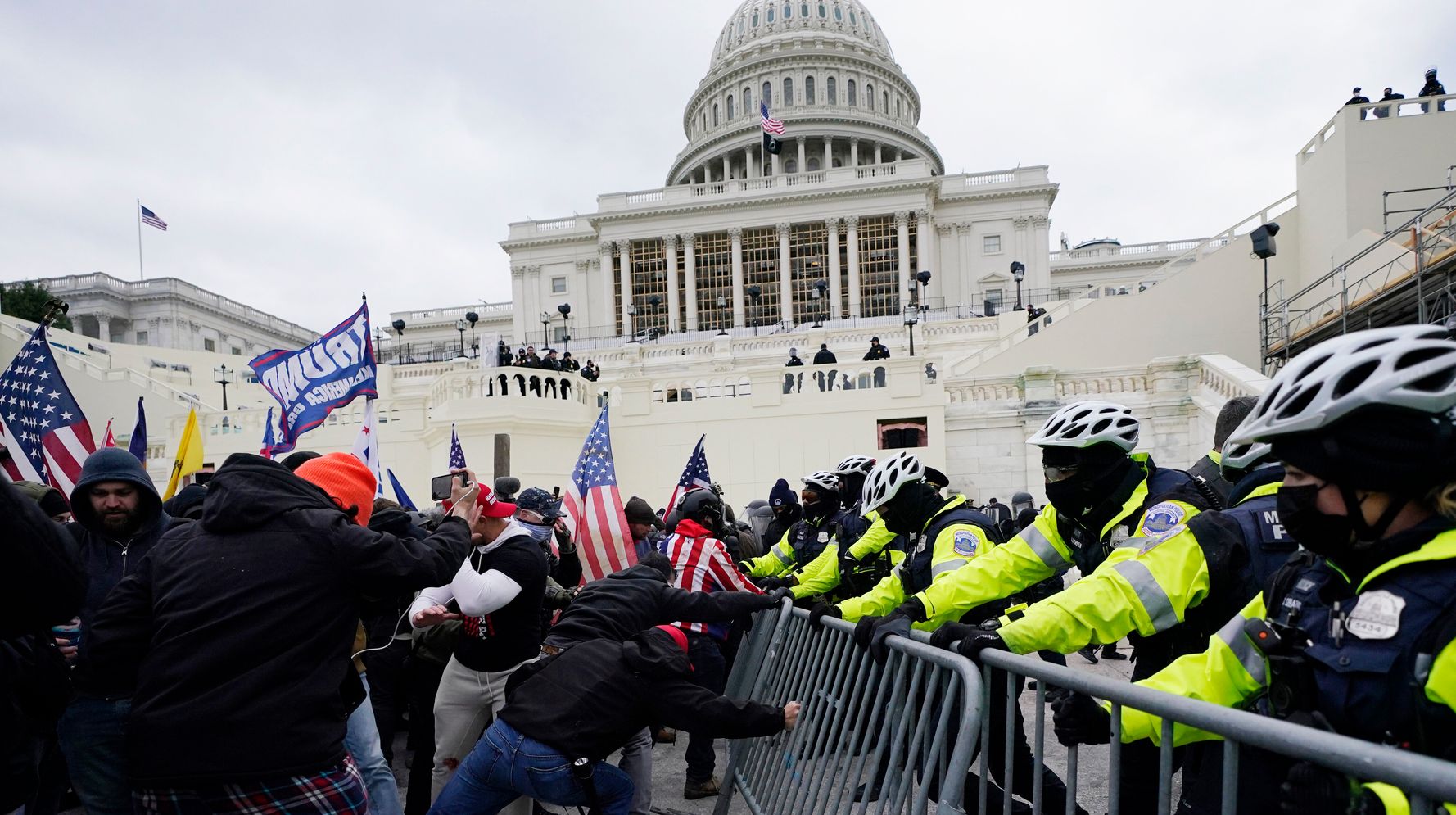 As the nation continues to learn more about the attack on the U.S. Capitol on Jan. 6, 2021, footage obtained by HuffPost reveals new details about how rioters broke through a police line that day as well as about the threats of lethal violence coming from the mob of Donald Trump supporters.

One set of videos shows Nolan Cooke, 24, breaching the Capitol as he wore a camera around his neck and recorded video while shouting obscenities at officers protecting the building.

Cooke was sentenced to one year and one day in prison Friday on felony charges for breaking into the Capitol and disrupting a joint session of Congress to certify Joe Biden’s Electoral College win. The sentence comes the day after the House select committee’s first public hearing on the insurrection.

In Cooke’s recordings, he is seen wearing a blue jean jacket and black gloves as he hoists an American flag toward the sky while surrounded by hundreds of other Trump supporters. While standing in front of a barricade, Cooke tells someone, “Hey, let’s walk around a little bit.”

In another recording, Cooke stands behind a person in a black “Sons of Trump” sweatshirt. A person talking to the crowd in the background near Cooke asks them, “Are you all here?” to which Cooke immediately shouts back, “Yeah!”

An additional recording that Cooke posted on his Snapchat account records him shouting, “Move the gates!” repeatedly, then saying, “This is our fucking land!” as he pushes to lead the crowd forward.

While U.S. Capitol Police officers stand in front of him, Cooke opens the barricades up again, saying, “This is our land!”

He fights back with the officers as they attempt to block the crowd.

After the struggle briefly ends, Cooke holds up his middle finger toward the officers on the Capitol grounds.

People in the background are heard repeatedly shouting, “Stop the steal!” as the crowd continues pushing forward against the U.S. Capitol police officers.

Video from Cooke’s TikTok account also shows him approaching U.S. Capitol Police officers with U.S. and Donald Trump flags waving in front of him. Cooke joined the frontlines of the riot and aided in leading the charge, breaking through a police line, according to court documents.

Cooke was placed on three years of supervised release and must also pay $2,000 in restitution, according to the Department of Justice.

HuffPost also obtained videos in another case, related to a sentencing hearing for Daryl and Daniel Johnson, a father-son duo from Iowa convicted of felony civil disorder for their role in the riot. Daryl, the father, was sentenced to one month in prison, and Daniel was sentenced to four months.

The footage was taken on the other side of doors inside the Capitol, where a throng of Trump supporters can be seen trying to get into the Rotunda. “Get out of the way!” the rioters inside can be heard yelling at the cops, eager to join forces with their MAGA brethren outside. “Open the door!” they yelled. “Push!”

One rioter repeatedly yells “Your life is not worth it!” at the officers, adding: “You’re going to die if you don’t get out of the way.”

The rioters charge the visibly panicked police officers, pressing them against the door and using Trump and Gadsen “Don’t tread on me” flags to try to pry the door open. “You guys, if it works, run,” someone says.

Eventually the doors open and more rioters begin to spill into the Rotunda. A police officer can be seen staggering away, holding his head.

“Mark my words, yesterday will be the beginning of the revolution,” Daryl Johnson wrote on social media the day after the riot, according to prosecutors. He also suggested there could be “hangings on the front lawn of the capital.”