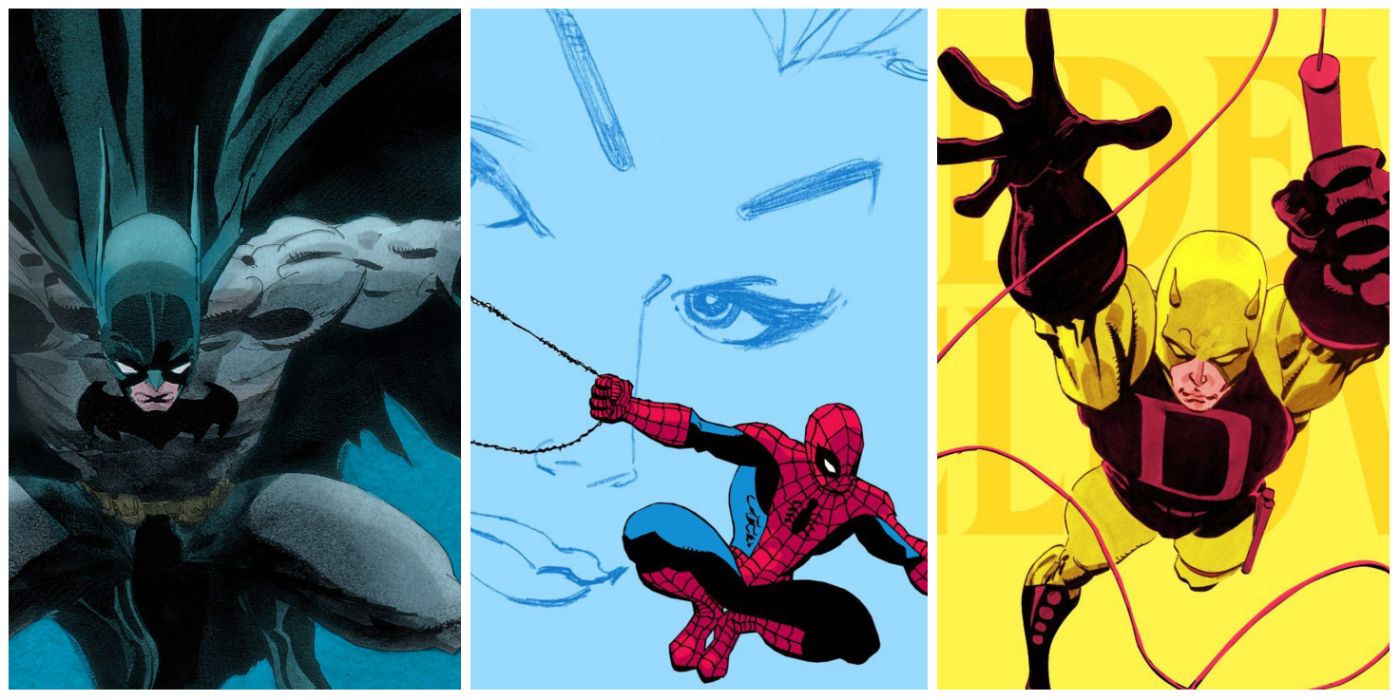 On June 16, 2022, legendary comic book artist, Tim Sale, passed away at 66 years old and many across the comic book industry have shared their feelings of love and admiration for Sale and his work. As one of the most experienced comic book artists the industry has ever seen, Sale leaves behind an extensive legacy that includes notable work with numerous superstar characters like Batman, Spider-Man, and Daredevil.

Recognized as one of the most versatile comic creatives ever, few in the comic industry can say they’ve worked with as many iconic characters as Tim Sale. In fact, Tim Sale not only worked with many great characters, but he helped create legendary, fan-favorite stories for nearly all of them.

10 The Long Halloween Is A Must Read

Recognized by diehard Batman fans as one of the best Batman stories of all time, Batman: The Long Halloween is a thirteen-issue series written by Sale’s frequent creative collaborator, Jeph Loeb. Featuring art from Sale, the story revolves around Batman as he investigates a string of murders that start on Halloween night.

9 Dark Victory Is An Underrated Classic

A direct sequel to Batman: The Long Halloween, Batman: Dark Victory is a fourteen-part series written by Jeph Loeb and drawn by Tim Sale. One of the most underrated comics in its own right, Batman: Dark Victory, is often overshadowed by its predecessor. However, Dark Victory‘s narrative is just as strong, and Sale’s art remains at its peak in this story.

RELATED: 5 Reasons Why Dark Victory Is The Most Underrated Batman Comic (& 5 Why It’s The Black Mirror)

Taking place several months after the end of Batman: The Long Halloween, the story follows Batman as he further embraces a lifestyle of self-isolation, sulking in the shame of letting Harvey Dent fall to evil. Throughout the comic, Sale’s ability to utilize negative space is on display, as well as his legendary ability to depict Batman’s iconic silhouette.

A six-issue mini-series set during the early days of Daredevil’s time helping the people of Hell’s Kitchen, Daredevil: Yellow was the first of four comics in Loeb and Sale’s “color” series for Marvel. Utilizing Daredevil’s original, yellow outfit, which only lasted the first seven issues of the original Daredevil comic run, Sale’s Daredevil instantly separates itself visually from the rest of the pack.

Throughout Daredevil: Yellow, the story revolves around the street-level hero as he attempts to write a letter to his deceased friend, Karen Page. An emotional story that honors Daredevil’s roots as a character, Daredevil: Yellow is often viewed as one of the best Daredevil comics ever made.

7 Spider-Man: Blue Is An Emotional Reflection

The second book in Loeb and Sale’s “color” series, Spider-Man: Blue, tells the story of a reflective Peter Parker as he visits the place Gwen Stacy, his late girlfriend, was killed. A retelling of the iconic events from Amazing Spider-Man issues 40 through 48, Spider-Man: Blue introduced new stipulations to the plot that dived deep into the events of the previous comics.

An artistic tribute to the legendary comics artist John Romita Sr., Sale’s art style fits in seamlessly with the flashback sequences shown in the book. Similar to the usage of yellow in Daredevil: Yellow, Sale’s employment of blue shades throughout Spider-Man: Blue does an excellent job of the feelings Gwen Stacy’s memory evokes for Peter Parker.

A series revolving around two of the greatest members of the X-Men, Wolverine/Gambit: Victims is a four-issue mini-series from the creative team of Loeb and Sale. In the story, Gambit investigates a murder and finds evidence that implicates Wolverine as the perpetrator. Hoping to bring his fellow X-Men member to justice, Gambit follows a mysterious trail, with pieces of the investigation revealing themselves along the way.

Like Batman: The Long Halloween, Wolverine/Gambit: Victims is a murder mystery narrative that keeps the reader guessing. In signature Tim Sale fashion, the art throughout the entire series perfectly captures the demeanor of Wolverine and Gambit, focusing on facial details and body language.

5 Batman: Haunted Knight Is A Horror Anthology Based Around The Dark Knight

RELATED: The 10 Cruelest Villains Batman Has Ever Faced

For the story of Batman: Ghost Legends of the Dark Knight Halloween Special #1, Loeb and Sale crafted a dark take on the classic Dickens novel, A Christmas Carol, twisting the story to fit a Halloween theme. Throughout the story, Sale’s artwork is consistently haunting and creepy, bending the iconic imagery of A Christmas Carol into a dark, Batman-like world.

4 Hulk: Gray Is A Homage To The Silver Age Hulk

A six-issue series with all the requisite Hulk action, Hulk: Gray delivers a profoundly emotional story perfectly complemented by Tim Sale’s art. A clear homage to Jack Kirby’s Hulk, the first version of Hulk ever drawn, Sale’s version of the man-monster in Hulk: Gray uses a simple design and minimal coloring to maximize dramatic effect.

3 Catwoman: When In Rome Explores The Antihero’s Quest For Identity

Another massively influential book from the creative team of Loeb and Sale, Catwoman: When In Rome, is considered a must-read for all Catwoman fans. Set during the events of the aforementioned Batman: Dark Victory, the story shows Catwoman taking a trip to Rome alongside her friend, The Riddler.

Set to meet with a local mafia boss, Don Verinni, Catwoman is on a mission to find information regarding her long-lost parents, who she believes to be the crime lord Carmine Falcone and his wife. Drawn in a similar style to The Long Halloween and Dark Victory, Catwoman: When In Rome features an Audrey Hepburn-style design for Catwoman introduced by Sale in this book.

In fact, the process of drawing Captain America: White took so long that a seven-year gap occurred between its debut release and the release of its final issue. Sale’s creative choices here paid off, though, as the ink washing’s dramatic effect is undeniable, especially during the action sequences.

1 Superman: For All Seasons Gives A Unique Portrait Of The Man Of Steel

Viewed as one of the comics every Superman fan should read at least once, Superman For All Seasons is a four-issue mini-series by none other than Loeb and Sale. With each issue of the story taking place in a different season throughout the same year, the comic tells first-person narratives from different people in Superman’s life.

Revered for its beauty and its understanding of Superman as a character, Superman For All Seasons displays Sale’s incredible ability to constantly switch between vast landscapes and dramatic, close-up images of superheroes. With minimal, soft detail on Superman’s face combined with his imposing stature, Sale captures both the hard and soft sides of Superman’s personality.

NEXT: 10 Comic Book Artists You Should Be Following In 2022

Maternal mortality in the US outpaces rates in other industrialised nations. It’s about to get worse