The 10 Funniest Scenes In The DCEU 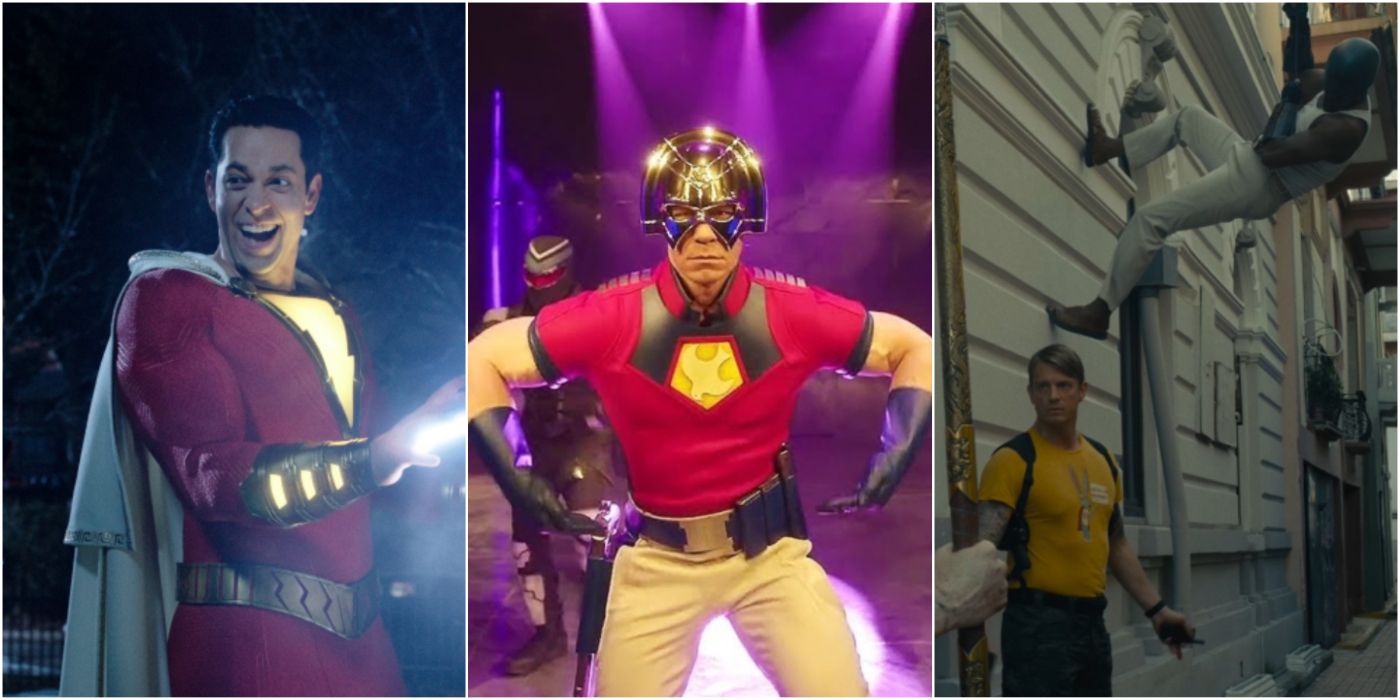 Of the two major superhero blockbuster franchises, the DC Extended Universe has acquired a reputation for being overly grim and self-important. Far darker than its rival Marvel Cinematic Universe, DCEU films have become known for taking themselves too seriously, particularly in installments like Man of Steel or Batman v. Superman: Dawn of Justice.

However, the franchise isn’t all darkness. The DCEU has several films that are lighter-hearted, and even its darker films often have brief moments of levity. Although the humor is often dark, there are still several scenes throughout the DCEU that leave audiences in stitches.

10 The Gruesome Landing At Corto Maltese (The Suicide Squad)

In contrast to the uneven tone of Suicide Squad, the quasi-sequel reboot The Suicide Squad settles on a general tone of black comedy while organically making time for emotional or powerful moments. The Suicide Squad’s opening moments clue the audience in to what sort of film it is with undeniably horrific comedy.

Following the ill-fated landing of the first team at Corto Maltese, the scene is a violent massacre played for laughs. Everything goes wrong, the characters display strange and entirely unhelpful powers, and things degrade to the point that Harley Quinn is one of the most sensible people caught up in the carnage.

Harley Quinn has shown herself to be one of the DCEU’s most comedic characters, driving several films with her unusual, wacky antics. As the main character of Birds of Prey, Harley launches an assault on the Gotham City Police Department to rescue Cassandra Cain, which leads to an unusually comedic action sequence.

Featuring Harley’s unconventional approach, her self-aware narration, and contrasting her oddness with the mundanity of the GCPD, the scene packs a lot of comedy and impressive fight choreography. Harley uses a bat and beanbags as her weapons instead of guns, which allows the scene to stay funny, rather than being an outright massacre of cops and prisoners.

A core part of Wonder Woman is the chemistry between Diana Prince and Steve Trevor, which works well for comedic and romantic purposes. In one of their first scenes, Diana walks in on Steve as he is finishing up a bath.

Between Diana’s inexperience with men and Steve’s nonplussed reaction to the situation, there is plenty of comedy to establish a rapport between the two. Highlights include a misunderstanding involving Steve’s watch, entirely accidental innuendoes, and Steve being used as a benchmark compared to other men.

Jason Momoa’s Aquaman is one of the more comedic characters in the DCEU. He’s an ill-tempered but good-natured thug who often gets himself caught up in the moment, snarks at those around him, and is made to look foolish on a semi-frequent basis.

Early in Aquaman, Arthur tries to get a drink with his father when some tough-talking bikers approach. Just when a fight looks inevitable, they ask for a selfie and wind up drinking with Arthur. What follows is a photo montage as the group gets drunker and friendlier.

Despite being played by Laurence Fishburne, Perry White has had a surprisingly small amount of screentime in the DCEU. Nonetheless, in Batman v. Superman: Dawn of Justice, he returns to a more comedic characterization that comic fans recognize: a headline-chasing editor who frequently mocks his reporters in a deadpan fashion.

In a scene where Clark attempts to begin an investigation into Batman, Perry cuts him down to size several times. From poking fun at the idea of a crime wave in Gotham being newsworthy to meta-humor about nobody wanting to see Clark Kent take on the Batman, the scene is one of the lighter scenes in a film criticized for its lack of levity.

One of the more comedic villains in the DCEU is Roman Sionis, also known as Black Mask. In a departure from the comics, he’s portrayed as a fussy, petty, high-strung villain who is easily upset and very easily irritated. Although he can muster some legitimate menace, the character tends towards comedy – particularly when facing the gadfly-ish Harley Quinn.

In the middle of Birds of Prey, Sionis prepares to interrogate Harley to try to recover his diamond. The antics of Harley contrasting with Sionis’ petulant behavior creates an unexpectedly funny scene – and that’s before it devolves into a lengthy and inexplicable song and dance sequence to “Diamonds Are A Girl’s Best Friend.”

One of the central concepts of Shazam! is that its hero, Billy Batson, is a teenage boy who can become an adult superhero. Shazam! is more explicitly comedic than much of the DCEU, being a mostly light-hearted film with plenty of time set aside for humorous setpieces.

In one lengthy sequence, after Billy acquires his superpowers, he and his friend Freddie begin to extensively test them. From firing lightning at things and purchasing alcohol using his adult appearance to sneaking into an adult club and having Billy shot in the face, the entire scene is played for extended laughs. It’s a funny and accurate example of what teenagers might do with superpowers.

3 Diana On The Boat With Steve (Wonder Woman)

A lot of the comedy in Wonder Woman comes from the entirely different worlds that Diana and Steve inhabit, each being completely nonplussed by things the other finds normal. As they leave Themyscira by boat, they get to know each other better and Steve becomes increasingly disarmed by what Diana says.

From discussing Diana being made from clay and brought to life by Zeus to debating the need for men within a romantic and sexual relationship, Diana makes Steve give several double-takes, seemingly obliviously. The result is a scene that is as sweet as it is comedically entertaining.

2 Flag And Bloodsport Trying To Rescue Harley (The Suicide Squad)

After the massacre at the beach, the Corto Maltese military takes Harley prisoner. After she kills the dictator who wishes to marry her, she winds up being imprisoned and tortured. The other members of the squad on the island set about a plan to rescue her, which involves an elaborate break-in by Rick Flag and Bloodsport.

As they prepare to enter, Harley walks up beside them, having massacred her way out single-handedly. Flag is petulantly disappointed, and both he and Bloodsport regard it as ‘patronizing’ when Harley offers to get herself caught again so they can carry out their plan. It’s one of the many standout moments in a funny film.

Taking after The Suicide Squad, Peacemaker is a show rife with comedy, focusing on one of the stiffest and most deadpan characters from that film. The entire show is full of funny sequences, moments, and exchanges, but its opening credit sequence is one of the most notable and funniest things about Peacemaker.

It features the entire cast doing a dance number in a parody of countless other opening titles. Due to the show’s characterization and subject, they do it in the stiffest and most humorless way possible. The absurdity of their well-choreographed dance juxtaposed with the lack of enthusiasm any of them show creates a perfect set of opening credits that let the audience know what they’re in for.

Muslim nations rip into India over insulting remarks about Islam