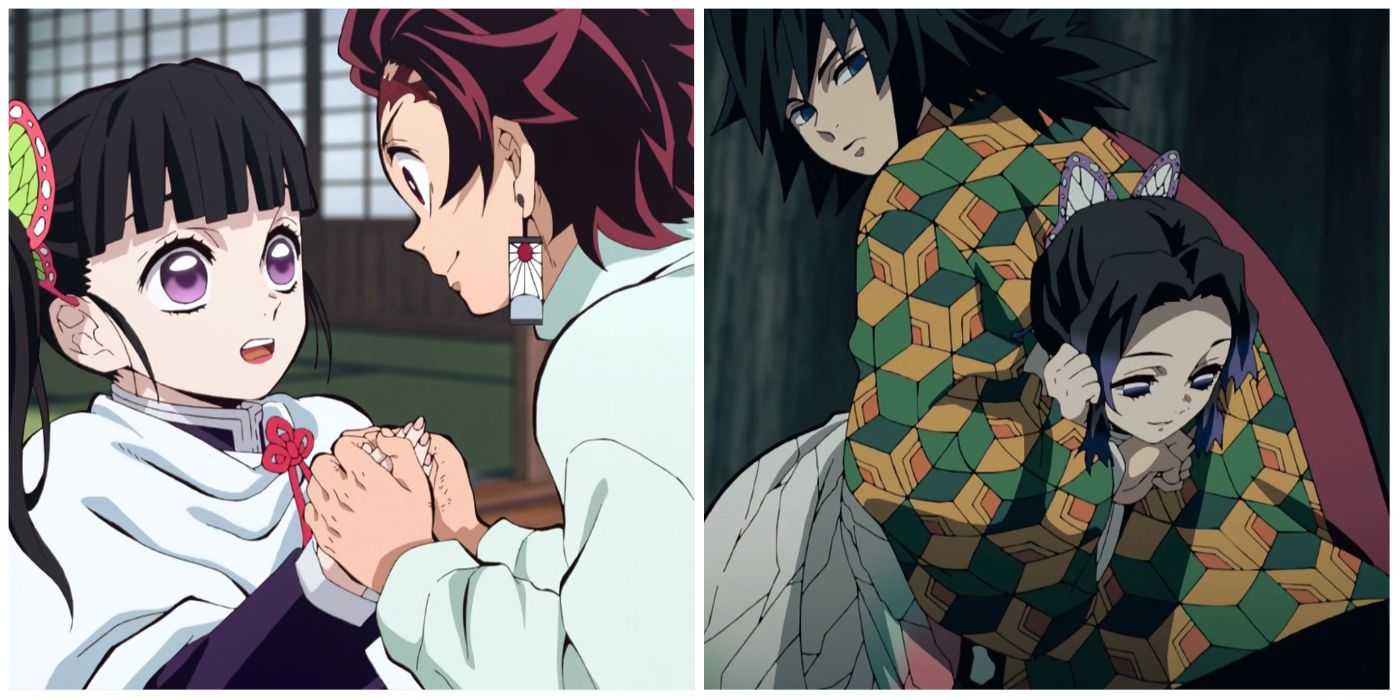 Demon Slayer is a hugely popular shonen anime series that features more than stellar animation from Studio UFOtable and an exciting combat system of swords and breathing. Like any good shonen series, Demon Slayer boasts a large cast of charming and compelling characters, from the cuddly Nezuko Kamado to the flashy Tengen Uzui and beyond.

Naturally, popular and endearing anime like Demon Slayer inspire all kinds of ships or pairings among fans, some of which are remarkably creative and well thought out. Some of these ships are canon while others are strictly fanon. Even though all of them are just as valid, they can be ranked according to wholesomeness. Bizarre crack pairings can be fun, but wholesome ships are the best of all.

The nine elite Hashira always put duty first, but they also find time to forge meaningful friendships or even rivalries amongst themselves or with other demon slayers. A charming example of this is the Water Hashira, Giyu Tomioka the kuudere, and the outwardly cheerful Shinobu Kocho.

Shinobu is secretly furious and intense, but she is still polite and charming around others, including Giyu himself. These Hashira love to tease and annoy one another as good friends, and it’s easy to imagine a wholesome romance blossoming between them. Their chemistry is just hilarious.

The shonen hero himself, Tanjiro Kamado, is paired with many different characters in the imagination of fans. Many popular shonen leads such as Izuku, Naruto, and Ichigo are shipped all over the place, and Tanjiro has a few solid ships of his own, including Tanjiro/Shinobu.

These two characters are just friends in the actual story of Demon Slayer, but they could still form a wholesome pair if their mutual feelings were a bit stronger. And Tanjiro has the benefit of sensing and understanding Shinobu’s hidden rage, which can only help.

8 Tamayo & Yushiro Could Totally Be A Thing

At one point in Tokyo, Tanjiro and Nezuko met the demon doctor Tamayo, a benevolent demon who would much rather heal other people and demons than hurt them or feast on their flesh. Tamayo is a naturally kind and selfless person and quite beautiful, too.

RELATED: The 10 Most Wholesome Legend of Korra Ships, Ranked

So far in the Demon Slayer anime, Yushiro’s strong, wholesome feelings appear to be one-sided, but that’s where fanon takes over. Perhaps in an alternate timeline, Tamayo could warm up to Yushiro’s pure feelings for her, and they could get their happily ever after in a peaceful world at last.

This particular pairing is only moderately popular among Demon Slayer fans, with each character involved having more mainstream ships to their names. But even so, the fanon Inosuke/Kanao pairing is a fun one, and these characters get along surprisingly well. No problems there.

It’s funny to imagine the loud Inosuke pairing up with the whisper-quiet Kanao Tsuyuri, and this ship is mostly based on later events of the Demon Slayer manga. They bonded while fighting a particularly strong enemy side by side, and Inosuke risked his life to save Kanao’s own.

6 Tanjiro & Aoi Kanzaki Are Nice And Wholesome Together

This is another solid, albeit unremarkable, Tanjiro Kamado ship in the Demon Slayer fandom. This particular pairing never became canon, but for a time, it looked like Aoi Kanzaki the tsundere was Tanjiro’s best and most wholesome romantic prospect. And there is some merit to that idea.

Even if this ship never actually sailed, it’s a wholesome and endearing fanon pairing all the same. For example, Aoi generously repaired Nezuko’s box, for which Tanjiro thanked her. And most of all, Tanjiro insisted to his friends that Aoi is a very nice person under her grouchy exterior, which was kind of him. He truly understands her.

Tanjiro is also involved in some charming slash pairings, and that includes a slash pairing with his electric friend, Zenitsu Agatsuma. It’s true that Tanjiro finds Zenitsu’s personality annoying at times, but these two boys are good friends and comrades in arms to the very end.

Zenitsu and Tanjiro respect and rely upon each other a great deal, and they have shared more than a few wholesome moments together in the anime and manga, which helps solidify this slash pairing even more. And it helps that Zenitsu often clings to Tanjiro in cute ways whenever he’s afraid. Ships have been built from less.

4 Zenitsu & Nezuko Are Just Adorable Together

The Zenitsu/Nezuko ship has the benefit of being totally canon later in the story of Demon Slayer. Ever since the start, Zenitsu has been totally enamored with Tanjiro’s adorable little sister, Nezuko, though Zenitsu’s affection was totally one-sided for a time.

All the same, this ship is a wonderfully wholesome and healthy one, and fans love every minute of it. Zenitsu may be annoying, but his love is genuine, and he always wants what’s best for Nezuko. He even dreamed about being together with her while under Enmu’s spell in the Mugen Train story arc.

3 Inosuke & Aoi Get Along Great

This is another wholesome Demon Slayer ship that made it into canon, which only strengthens this lovely pairing. At first, Inosuke and Aoi Kanzaki bonded at the Butterfly Mansion, where Aoi had to handle the rowdy and untamed Inosuke. She thought he was a handful, but they later learned to get along just fine.

Inosuke was immensely grateful for the food Aoi served him, and his crush on her might have been born at that moment. What is more, Inosuke misses the warmth and maternal care of his missing mother, and with Aoi caring for him, it’s only natural for Inosuke to get a strong, favorable impression. She gives Inosuke the love he never had growing up.

2 Tanjiro & Inosuke Rely On One Another

This is another solid slash pairing involving Tanjiro and a close friend, in this case, Inosuke Hashibira himself. These two boys trust and respect each other immensely, even if they sometimes argue or annoy one another. They met under unfavorable circumstances, but they have long since made up for that.

Tanjiro had a strong and positive influence on Inosuke and even finds him physically attractive, and in return, Inosuke fights hard to impress Tanjiro and prove their friendship. To cap it all off, Inosuke is always thrilled to get praise and acknowledgment from Tanjiro and is deeply empowered by it.

This is Demon Slayer‘s most wholesome ship of all, and it is also 100% canon in the manga. The Tanjiro/Kanao pairing has a lot going for it, including how both characters are kind and compassionate people who greatly admire and support one another, which is a great start.

Kanao was empowered when Tanjiro kindly encouraged her to speak up and make her own decisions, and not just rely on coin flips. Kanao soon developed a secret but strong crush on Tanjiro that Tanjiro eventually reciprocated, and Kanao will even break her silence and speak loudly on Tanjiro’s behalf.

Blizzard confirms World of Warcraft Dragonflight expansion is out this year