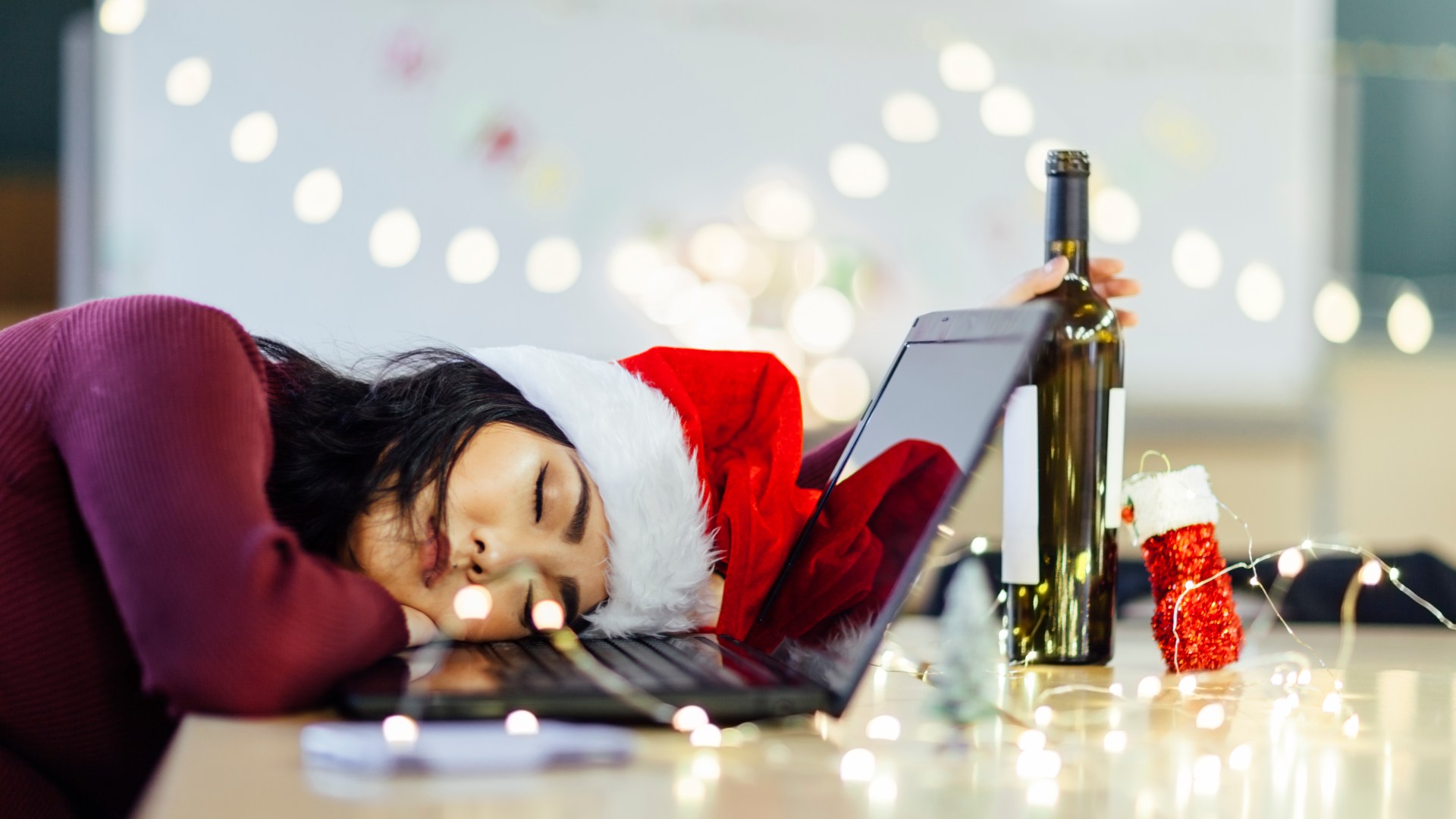 CHRISTMAS is just around the corner, and for most people it comes with extra helpings of booze.

But if you’re able to guzzle gallons of mulled wine or Santa stout without feeling bleak then it could mean you’re a functioning alcoholic.

Experts define a functioning alcoholic as someone who suffers from alcoholism, but is still able to keep up daily activities such as work and social commitments.

It’s because people are able to live a seemingly normal life that it can be hard to spot a functioning alcoholic.

CEO of Delamere health and addiction specialist Martin Preston said those that suffer from alcoholism are exceptionally good at hiding their condition.

He said: “With few apparent negative consequences, a functioning alcoholic is unlikely to want to change whilst they feel they still have time.

“Alcohol addiction is at the chronic end of the spectrum of alcohol use disorders for which there is no cure.

“It can, however, be successfully treated and the sooner treatment is undertaken the better for the individual concerned and their loved ones.”

But what are the signs you need to know?

1. A constant supply of booze

People who are functioning alcoholics will always make sure they have booze nearby or they have access to alcohol.

This can be difficult to spot during the Christmas period as there always seems to be prosecco or mulled wine flowing freely.

Martin said that functioning alcoholics are likely to hide alcohol in strange places such as their garage, at the office, in bushes or in their car – so that they know where it is when they need it.

Martin said that becoming irritable, anxious, restless and unable to sleep if they are unable to drink is a sign of a functioning alcoholic.

He also said that functioning alcoholics may become erratic, spontaneous, angry or change their character completely while intoxicated.

Again, many people are partial to a glass of buck’s fizz on Christmas morning – which doesn’t always mean you have an issue.

But Martin says regularly drinking in the morning before going about their day, or at odd times of the day such as lunchtime in order to avoid alcohol withdrawal symptoms, is also a sign.

He also said that drinking between work times or appointments, or drinking just enough to keep their alcohol levels topped up if they are alcohol dependent is a key sign that someone is struggling with their booze.

If someone you know, or you yourself has started to become defensive or flippant when challenged over drinking then it could be cause for concern.

When someone justifies drinking as a way of unwinding after work, a busy day with the kids or as a reward on a regular basis, then it could be a sign of a functioning alcoholic.

Denying they are an alcoholic, reasoning that they still hold down a job or take the kids to school on time, is also a sign of a struggle with booze intake and that it’s getting in the way of everyday life, Martin explained.

Difficulty in recalling events that took place while heavily intoxicated or experiencing an alcoholic blackout is a key sign of a functioning alcoholic, Martin said.

We all feel more care-free when we’ve had a drink, but Martin said for functioning alcoholics, this risk could be more dangerous and risk-taking in general could become more frequent.

He said: “They may well drive to work or drive children to school whilst still over the limit from the previous night or from taking a morning drink.”

How to cut down on your boozing this Christmas

Former politician Laura Willoughby MBE, who founded Club Soda, a mindful drinking movement that helps people change their drinking said there are things you can do to cut down on your boozing this festive season.

Laura explained: “If you want a merry Christmas that you’ll remember the next day, you’ll want to consider how to cut back on the booze.

“Here are some tips to get you through the festive season, hangover free.”

Stop before you reach your limit: Your body takes some time to process alcohol. You’ll feel the initial effects after about 10 minutes, but the impact of alcohol will build over the next 30-90 minutes. That means you will get drunker even after you stop drinking. It’s always a good idea to stop sooner than you feel you need to, to give your body time to catch up.

Slow down and enjoy your drink: If you get into trouble with alcohol, chances are you drink too fast. Test yourself the next time you have a pint or a glass of wine. How long can you sit with it in front of you, untouched? And how long can you make it last? Take time to enjoy the alcohol you drink, savour the flavours and put down the glass between sips.

Have two alcohol-free drinks first: The standard advice to switch between alcoholic and non-alcoholic drinks doesn’t work because we always have the booze first. Instead, begin with two alcohol-free drinks. If you then alternate drinks, you will have reduced your alcohol consumption by more than half. And you will have started drinking later, so your day lasts longer.

People who are struggling with drink and who are functioning alcoholics will often be consuming booze at different points through the day.

Martin says that this leads to these people smelling of booze, with their urine also smelling strongly.

The urine is also usually dark due to the fact that the person is usually severely dehydrated.

When people drink too much the body struggles to break the toxins down, with 10 per cent being distributed throughout the body.

The alcohol smell on the breath usually comes directly from the stomach.

Functioning alcoholics are good at hiding their addiction, but it could manifest in different ways.

If you’re losing your temperature frequently or you’re struggling to get on top of things then it could be a sign that you’re a functioning alcoholic.

Brits have previously been given the crown of ‘binge drinking capital’, but this is something that might not just happen at the weekend for people who are functioning alcoholics.

People who are functioning alcoholics will often consume large amounts of booze after they have taken care of their daily activities, Martin said.

As students, many people would go for ‘pre drinks’ before hitting the clubs and bars in order to get a little bit tipsy without paying full price.

For functioning alcoholics ‘pre-loading’ means they can have the amount of booze they want before they go out without feeling judged when people comment on the amount they have consumed.

People struggling with booze might avoid social events in order to not be quizzed on their habits.

This might mean that someone struggling cancels events and plans.

Most people who are addicted to something need more and more of that thing as they can no longer get the same feeling or high they once had as they consume more and more.

This is the same for booze and Martin said that people who are functioning alcoholics will often use prescription drugs alongside booze to cope.

Finally, Martin said that if you’re drinking is causing you issues at home or work then you might have a problem.

He said a key sign of a functioning alcoholic is if alcohol has become a problem at home, with them either drinking excessively alone at home or disappearing to a pub or bar straight after work for hours.

What to do if you’re worried

If you have many of the above symptoms, it’s possible you have a drinking problem.

Delamere says it is fairly easy to self-diagnose alcoholism if a person is honest about their drinking and asks themselves the following questions:

Answering ‘NO’ to both of these questions indicates that a person is suffering from an Alcohol Use Disorder (AUD), over which they have no control.

If you’re concerned about your drinking or someone else’s, a good first step is to see a GP, the NHS says.

They’ll be able to discuss the services and treatments available to you after assessing your drinking habits using screening tests.

Treatment usually involves counselling and medicine that helps you to slowly cut down on drinking and avoid withdrawal symptoms.

There are also a number of charities, support groups, and private clinics to help.

How to get help with your booze

There are plenty of helpful resources and tools to help you with your drinking issues.

Drew Barrymore, 46, reveals she’s been secretly sober for two years after realizing alcohol ‘did not serve her’