The photographers behind these stunning shots are at the peak of their powers.

They are the winners of the 2022 CVCEPhoto mountain-activity photography contest, with their shots capturing daredevils scaling sheer rock faces, kayaking over thundering waterfalls and hanging off otherworldly rock formations.

Spanish photographer Yhabril Moro was declared the winner with a spectacular shot of a skier in mid-flight during sunset at the Spanish ski resort of Baqueira.

Other images that made it into the top 20 include a goose-bump-inducing shot taken from inside an ice cave in Canada, an otherworldly capture of the Milky Way arching over lake Stellisee in Switzerland and a skier racing dramatically down a slope in Wyoming.

The awards ceremony will be held in San Sebastian on May 28, with the winning images on display at the Club Vasco de Camping Elkartea exhibition room between May 30 and July 29.  And they can all be seen here, just by scrolling down…

Spanish photographer Yhabril Moro was declared the overall winner of the photography contest with this spectacular shot of a skier artfully flying through the air, silhouetted against the setting sun. Moro took the photo at the Baqueira Beret ski resort in the heart of the Spanish Pyrenees during this January’s Freeride World Tour, an annual series of competitions that brings together some of the world’s best freeskiers and snowboard freeriders. Explaining how he captured the golden shot he said: ‘After the competition I ran into my young friend Urko Yarza completely by chance. He is the future! In just a moment we improvised a plan at sunset, and he gave me the best photo of the day, better than all the ones I had taken from the pros’ 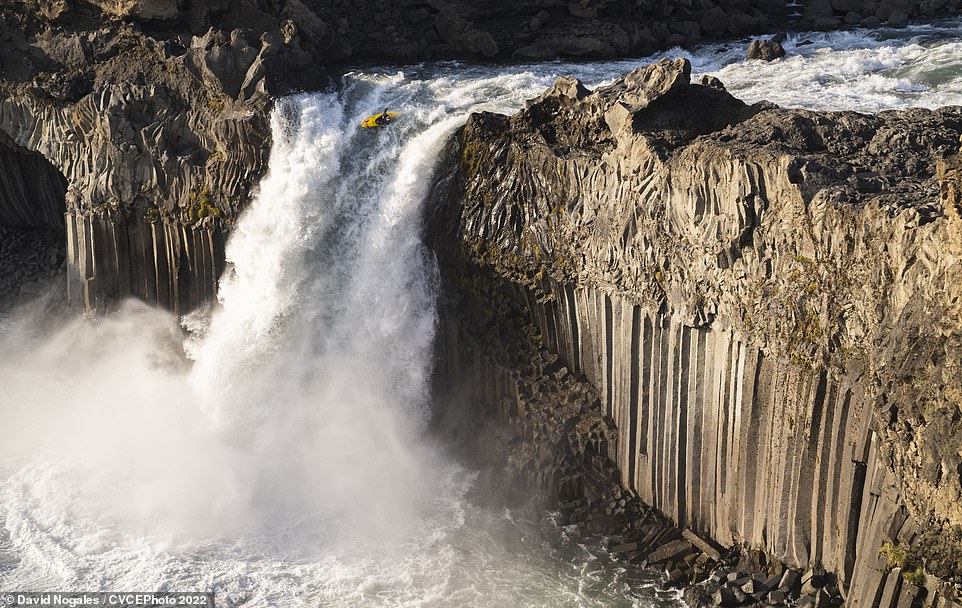 A kayaker braves the Aldeyjarfoss waterfall in Iceland’s northern highlands in this ‘honourable mention’ shot, taken by Spanish photographer David Nogales. He said: ‘Whilst working on a documentary project about extreme kayaking, we travelled all over Iceland until we reached Aldeyjarfoss. It’s one of the most scenic waterfalls I have ever seen due to the energy of the water and the strange basalt rock formations on its sides. It was late afternoon and the sun wasn’t quite as strong, so we had this epic dim light’ 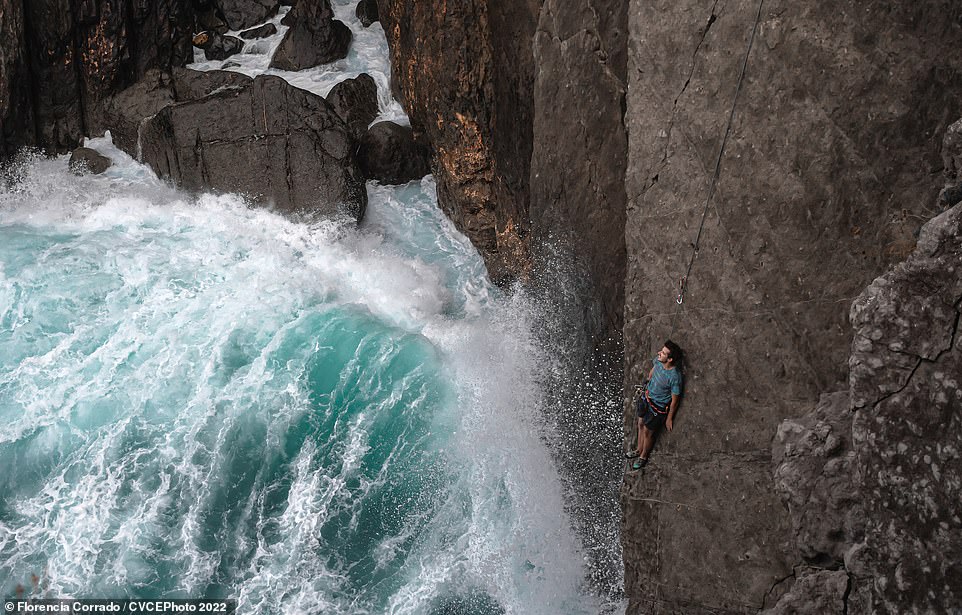 Florencia Corrado earned an honourable mention for this dramatic photo, shot near the village of Onton in the Cantabria region on Spain’s north coast. It shows a solo climber ‘feeling the wall vibrate on a day of great waves’ 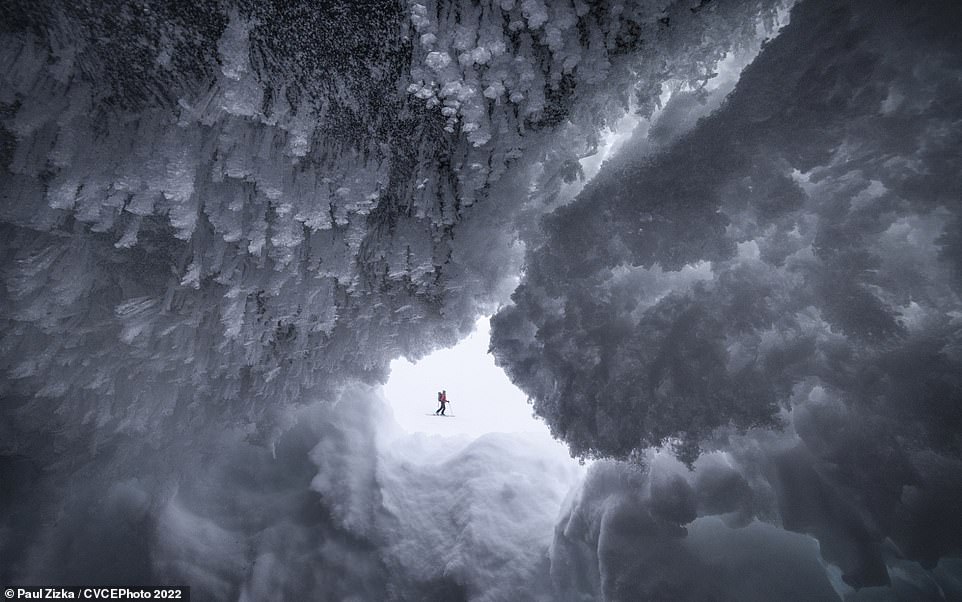 This frosty photo, taken by Canadian photographer Paul Zizka, won second prize in the CVCEPhoto competition. Titled ‘Fenetre Hivernale’ – meaning ‘winter window’ – the photo shows a skier moving past the mouth of an ice chamber inside the Stutfield Glacier in Jasper National Park, Alberta, Canada. Zizka said of the shot: ‘Fenetre Hivernale is a product of curiosity. Our group was moving past the toe of the Stutfield Glacier… and we noticed a small hole in the snow that covered the ice. Because the main goal for the day was to locate and photograph ice caves, we poked our heads inside every hole that we saw, just in case it would open up onto a large chamber. That particular one did not – it was a space just roomy enough for one or two people. Nevertheless, the view out of a small, hoar-frost-rimmed window made for great framing possibilities. I waited for my friend Sasha to ski through the frame and liked the result. I felt it conveyed the magic of winter in the Canadian Rockies’ 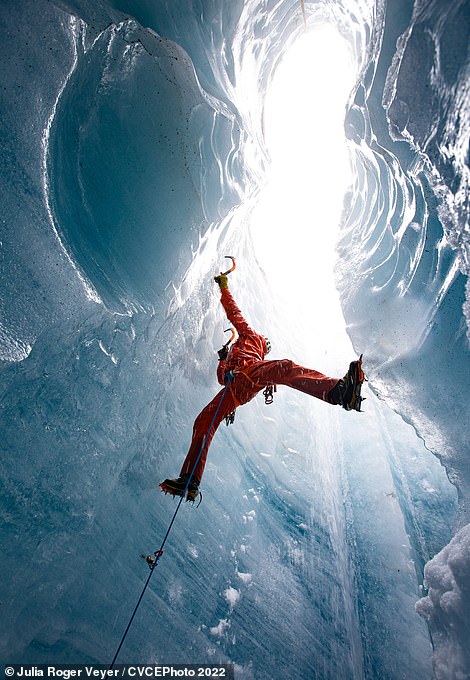 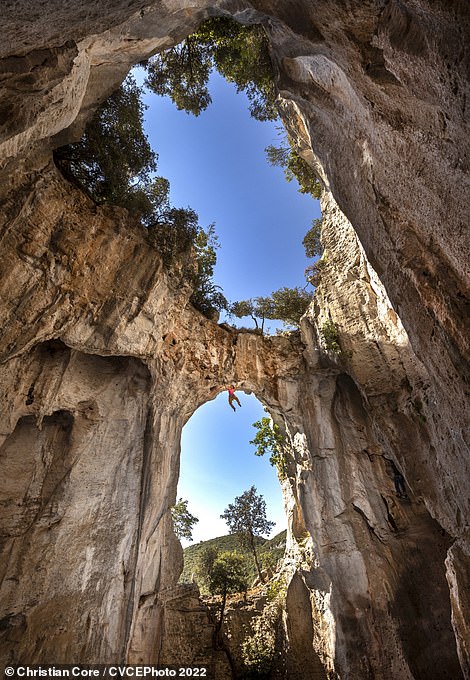 LEFT: During a two-day expedition in the autumn of 2021 exploring the Mer de Glace glacier in Chamonix in the French Alps, Julia Roger Veyer took this incredible shot – awarded an honourable mention – showing professional ice climber Jeff Mercier in action. She said: ‘Through this photo, I wanted to transmit both the beauty of this fragile element, the ice, as well as managing to capture the action of the climber. I chose this image because there is a nice contrast between the colour of the climber’s outfit and the deep blue of the ice, as well as between the power of the action and the softness of the light that comes from above. This image sums up everything I love when I shoot ice climbing.’ RIGHT: An honourable mention went to Christian Core for this sweaty-palm-inducing shot, which shows his friend Elena Poli climbing an ‘incredibly beautiful’ arch within the unique Grotta dell’Edera complex in the Savona province of northern Italy 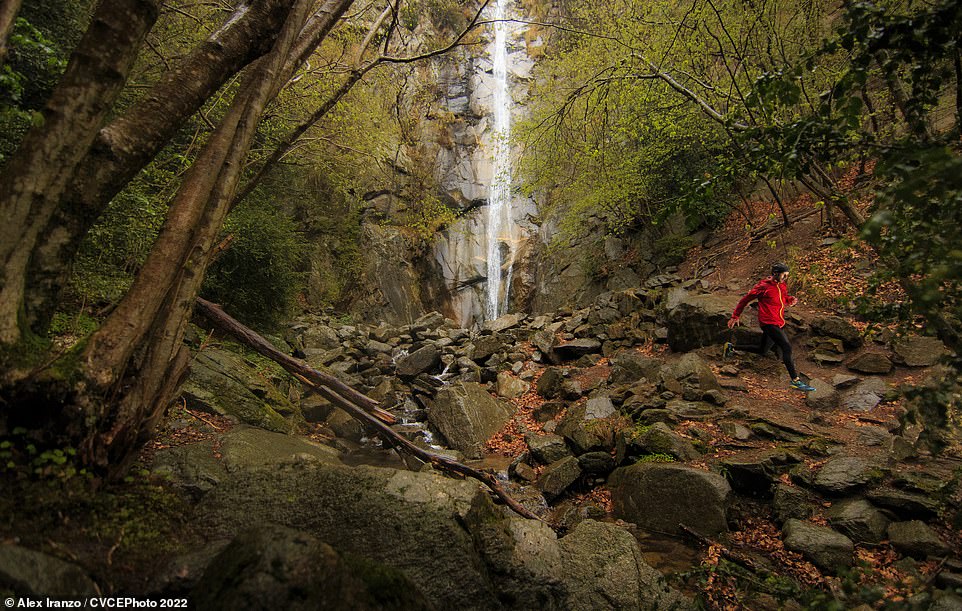 An honourable mention went to Alex Iranzo for this spellbinding shot of the Salt del Grill waterfall in the Spanish Pyrenees. The photographer said: ‘After a rainy day I was running through a valley called Vall de Nuria and during the descent, I went to see the well-known waterfall Salt del Grill. I liked the rain and those colours, so after eating something in my van, I went up again with the camera to take some pictures. I managed to take this one running with the waterfall in the background’ 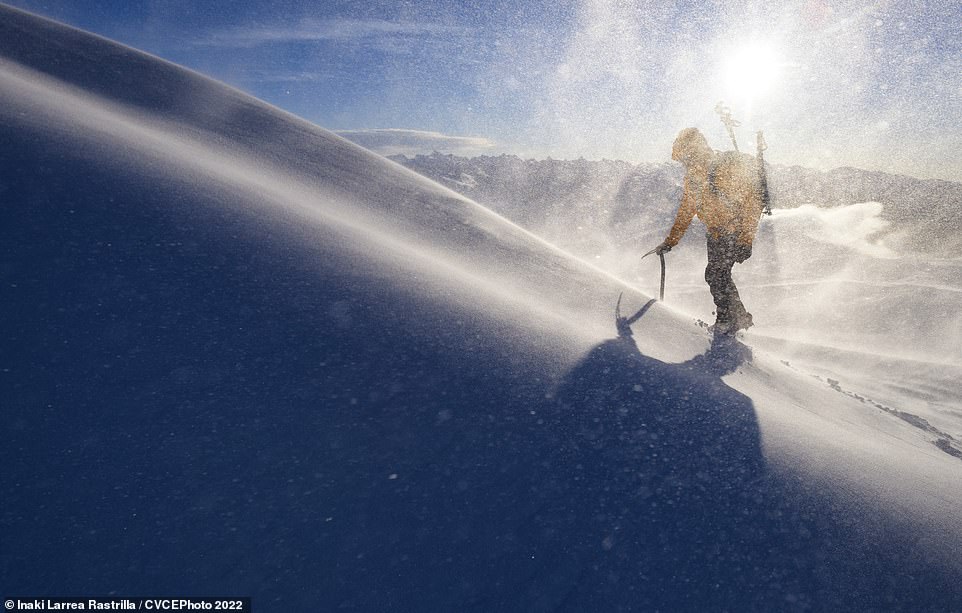 Inaki Larrea captured a mountaineer battling the elements on the pristine slopes of Mount Orhy in the French Pyrenees and was handed an honourable mention for his troubles. The photographer said: ‘Immersed in an atmosphere of ice crystals, the alpinist seemed to walk through the sky’ 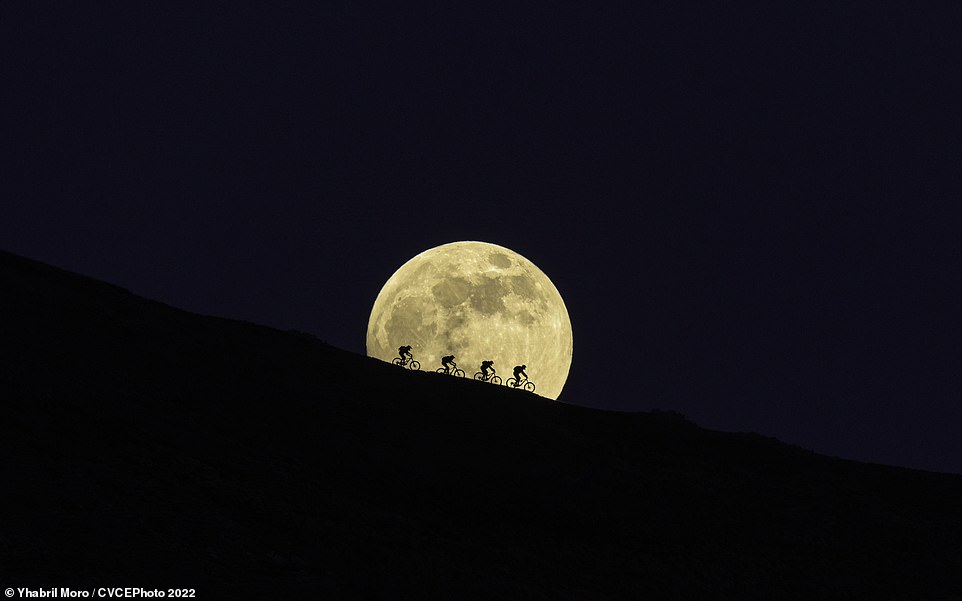 Winner Yhabril Moro received a second prize – the ‘Fifad Poster Prize’- for this perfectly composed picture taken at an altitude of about 2,500m (8,200ft) above the small village where he lives, Villanua in the Spanish Pyrenees. Moro explained that he had to stand about one kilometre away from the riders to get them inside the moon. And he revealed that it wasn’t spontaneous – it took several attempts. Moro commented: ‘I had been after a photo like this for a long time’ 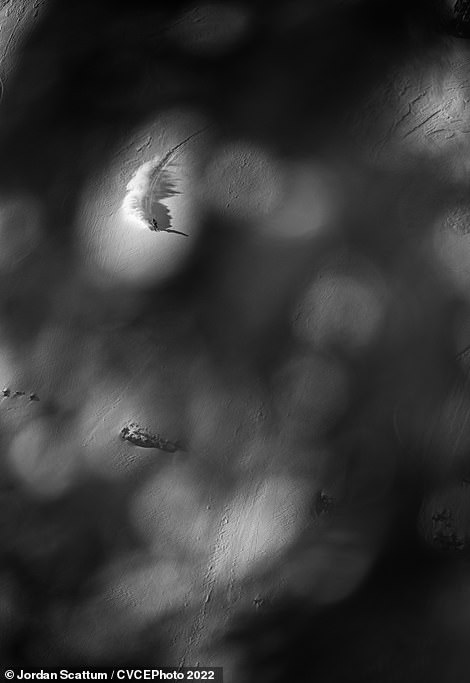 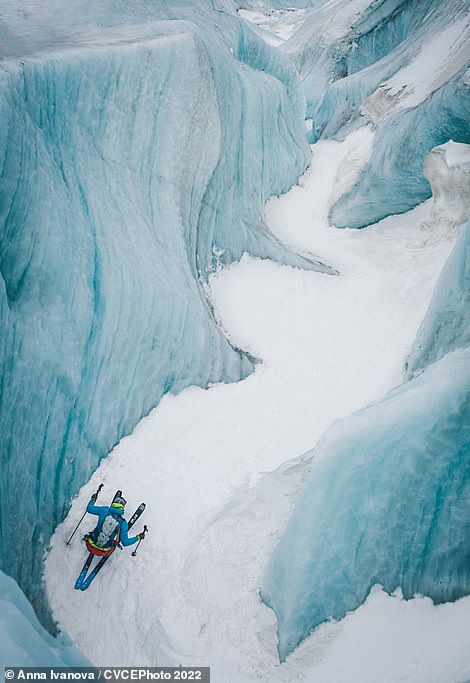 LEFT: A skier speeds down a mountain in the Teton Range near Jackson, Wyoming, in this black-and-white shot by Jordan Scattum called ‘Blink And You’ll Miss It’. Commenting on his ‘honourable mention shot’, he said: ‘After a much-needed storm in the Tetons we set out to capture Veronica Paulsen ripping up the untracked face of an iconic Jackson peak. On the hike towards the face I found this small patch of trees that gave a very unique perspective of the face and knew all I had to do from there was not miss my moment as Veronica counted down her drop in.’ RIGHT: ‘Lost in the Labyrinth’ is the name of this artfully shot ‘honourable mention’ image taken by Anna Ivanova in Chamonix, France. She said she took the image as she followed two friends during a three-month expedition that involved them crossing the Alps from the Dolomites in northeastern Italy to Nice in France by cycling, skiing, climbing and paragliding 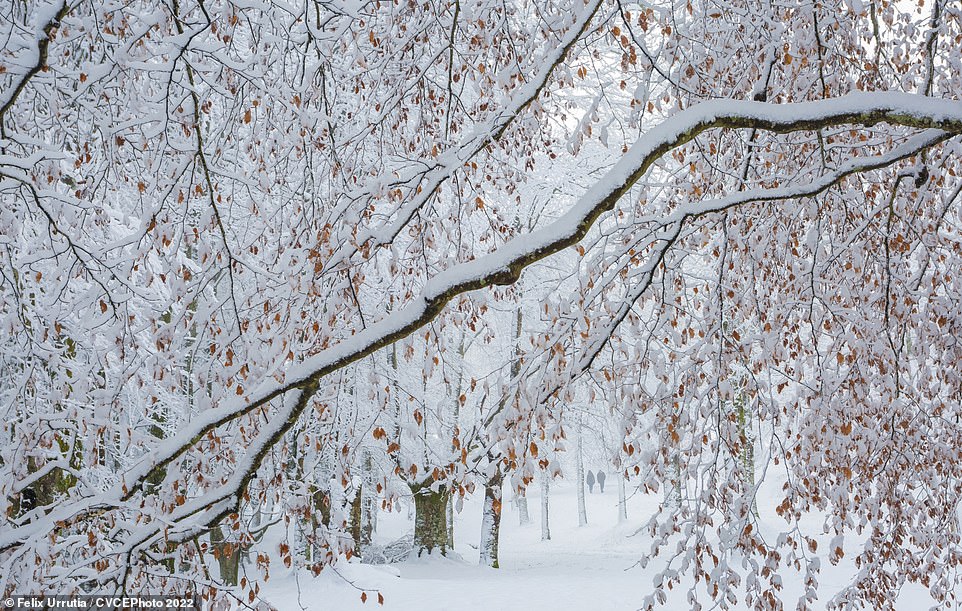 This magical photograph, which captures a couple between two trees, was taken by Felix Urrutia in Spain’s Urkiola Natural Park. It was awarded an ‘honourable mention’ 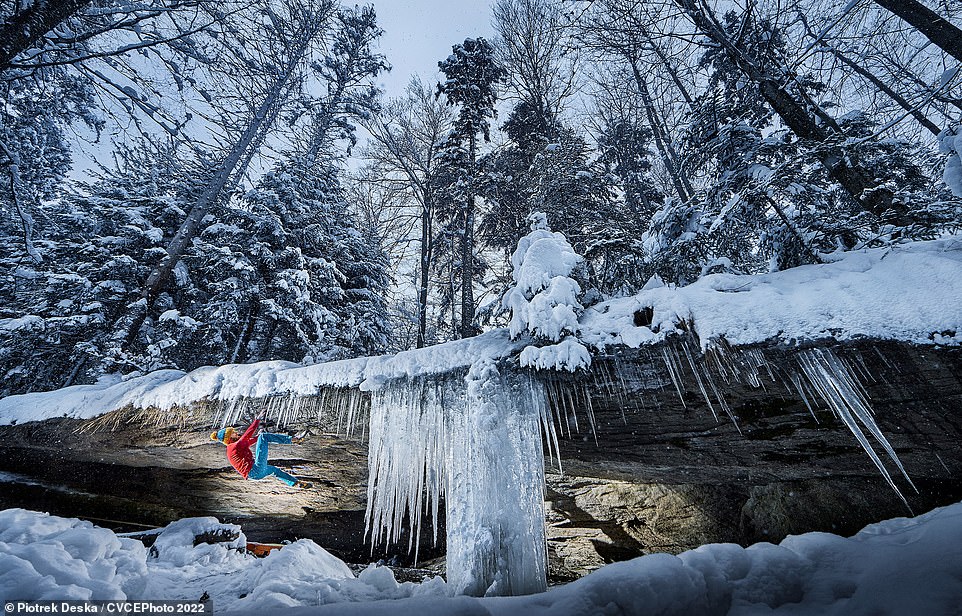 A climber seemingly defies gravity as he clings to a frozen overhang in this striking shot by Piotrek Deska, taken in Poland’s Beskidy mountain range. Deska said that this spot is a ‘grotto mostly known for its tiny waterfall that freezes in winter making a winter wonderland mood’. The shot was awarded an ‘honourable mention’ 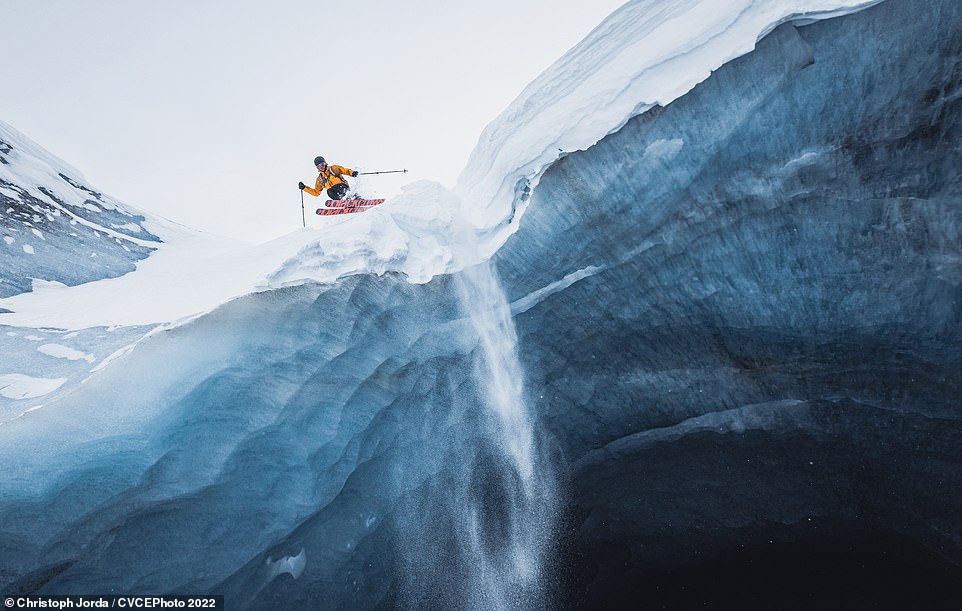 In this stunning photo, skier Jochen Mesle scoots over a very fragile ice cave within the Pitztal Glacier in Austria. Christoph Jorda, who took the photo, awarded an ‘honourable mention’, explained that Pitztal is one of the last remaining glaciers in the Tyrol region and under threat due to climate change. He said: ‘Every year a dedicated team of snowboarders and skiers travel to one of the last remaining glaciers in Tyrol. Mostly we go to the Pitztal Glacier. There are two reasons for this: first, by going there every year, we see how fast this beautiful and very old glacier world is disappearing due to climate change. We want to document this fast-disappearing world for the generations to come. My children won’t be able to see this anymore. Second, we use this beautiful glacier world as an outstanding location for extraordinary ski/snowboard photography’ 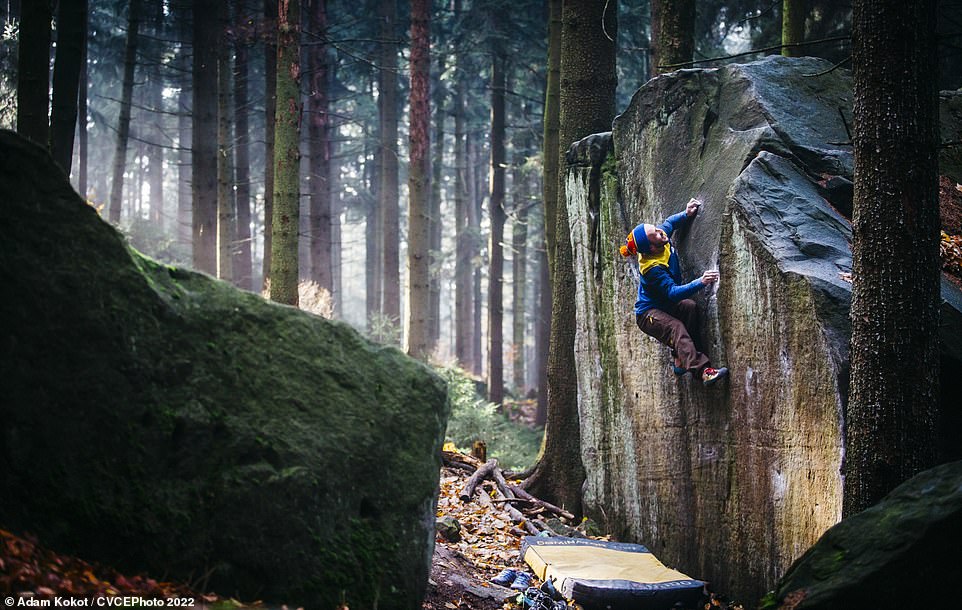 Above is a shot given an ‘honourable mention’ by Adam Kokot. It shows a climber near the tiny village of Machov in the Czech Republic, in an area of ‘beautiful forest’ containing several hundred boulder blocks within a 15 to 20-minute walk of each other. ‘It’s mostly easy landings,’ Kokot said 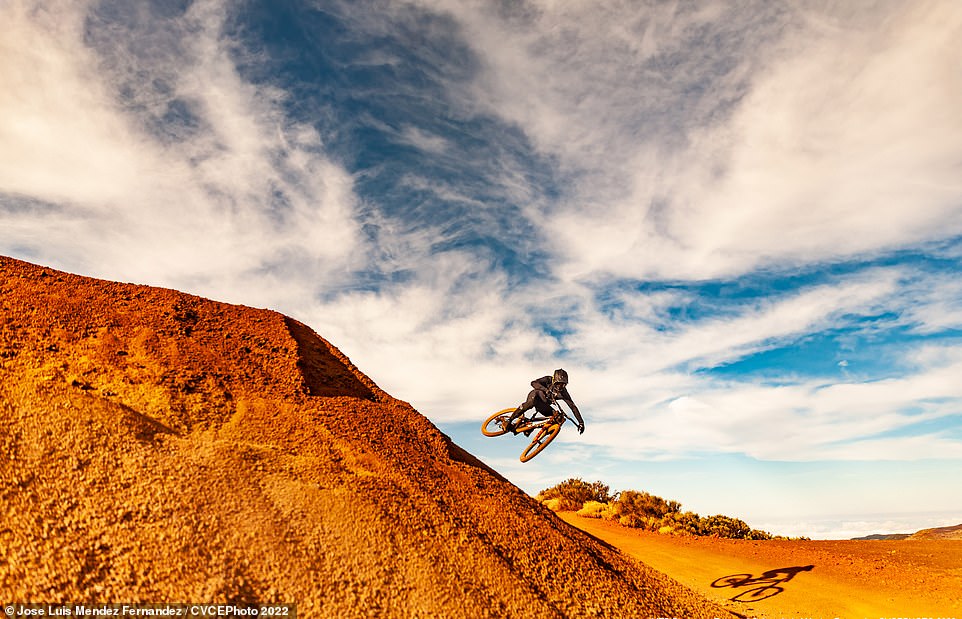 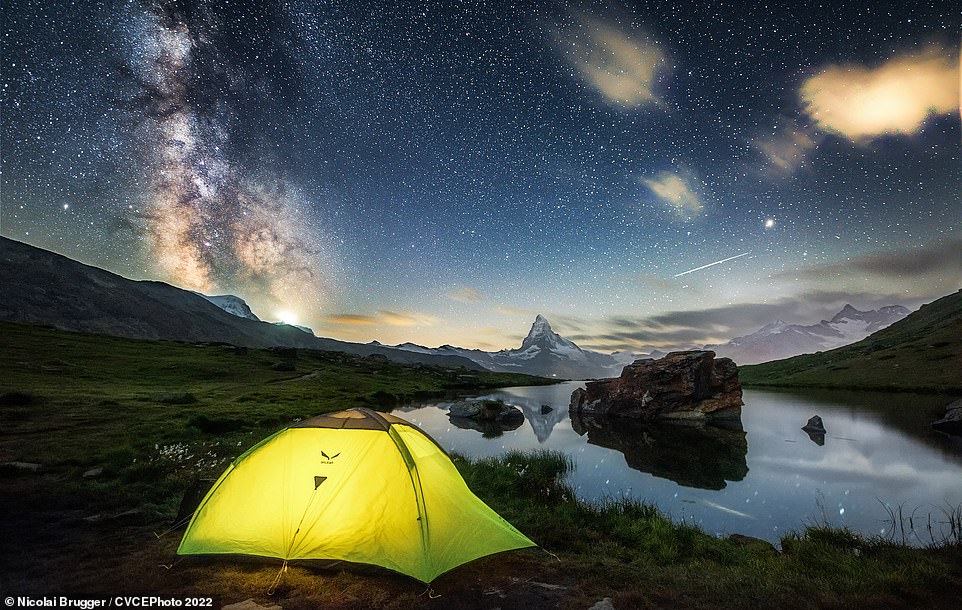 This otherworldly ‘honourable mention’ shot, titled ‘Star Hotel’, was captured by German photographer Nicolai Brugger on the shores of lake Stellisee on the east side of the Zermatt valley, with the reflection of the Matterhorn seen on its mirror-like surface. Brugger, who focuses much of his work on astronomy, said: ‘I took this picture near a new moon phase. I was up there with some friends and spent the night at the lake to shoot the Milky Way’ 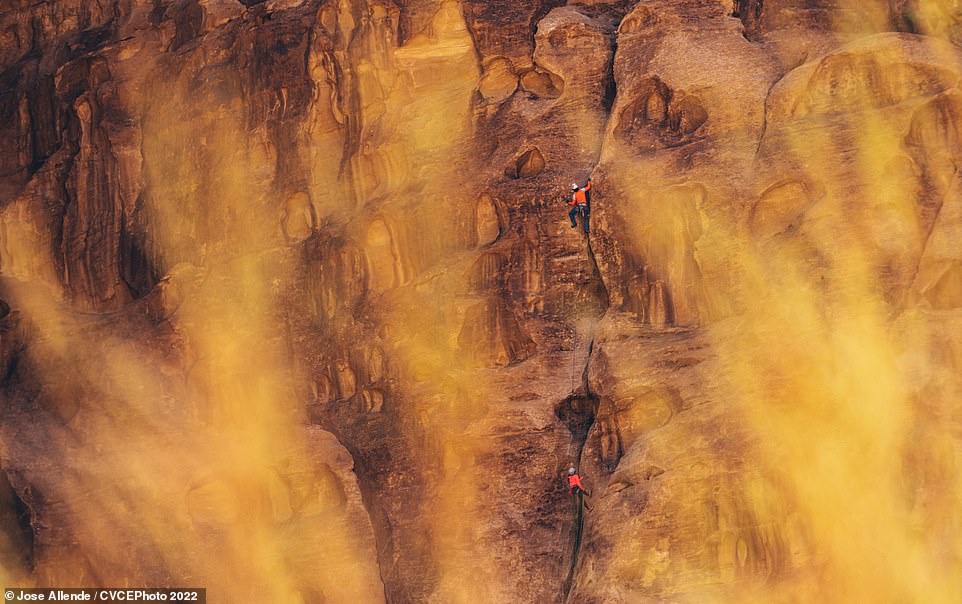 The third prize in this year’s CVCEPhoto competition went to Jose Allende for this amazing shot of two climbers scaling a sandstone climbing route known as the Merlin’s Wand in Jordan’s Wadi Rum desert. Explaining how he went about capturing the shot, he said:  ‘While my friends were climbing the route, I was looking for frames with a different point of view. I was on a dune where there were some small plants and I took some photos that I really liked. I saw that the effect of the branches was very similar to a flame, showing just what I felt at that moment in the middle of the desert. The problem was that from there I could only photograph the climbers in the first pitch, so I decided to climb a mountain that was right in front of me. I was surprised to find more of those plants up there, so I repeated the same frame again and this time I managed to photograph the climbers and give that feeling of desert heat to the image’ 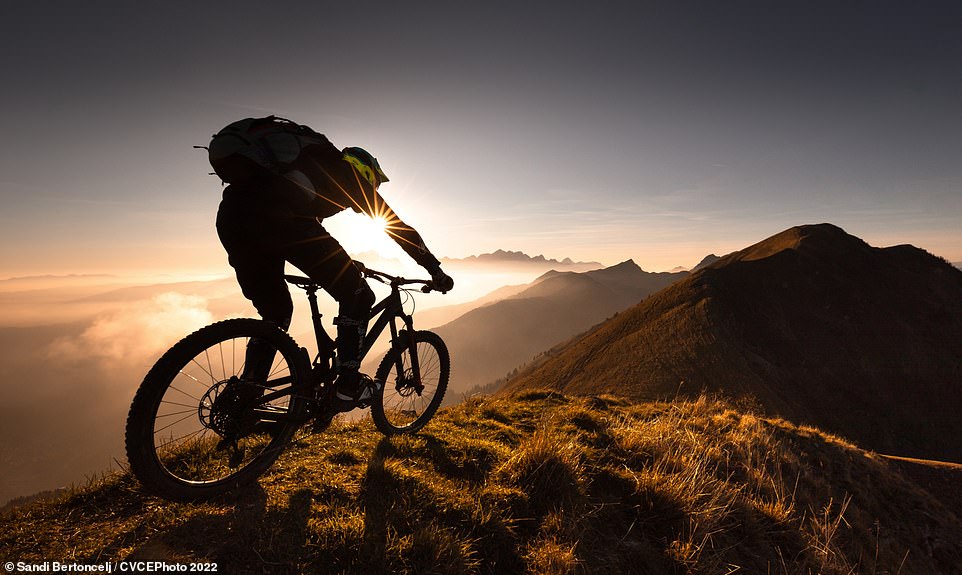 Slovenian-based photographer Sandi Bertoncelj titled this sunny honourable-mention shot ‘Every Soul is Free’. He said of the image, taken in the Karavanke mountain range in Slovenia, that it was ‘just one of those moments where everything comes together’. He continued: ‘The location, the light and the riding! We arrived at the peak of the mountain just before sunset. The light was awesome because the sun was shining through the peaks of the mountains, causing long shadows and lifting the mist in the valley. It was a very pleasant and exciting nature adventure’ 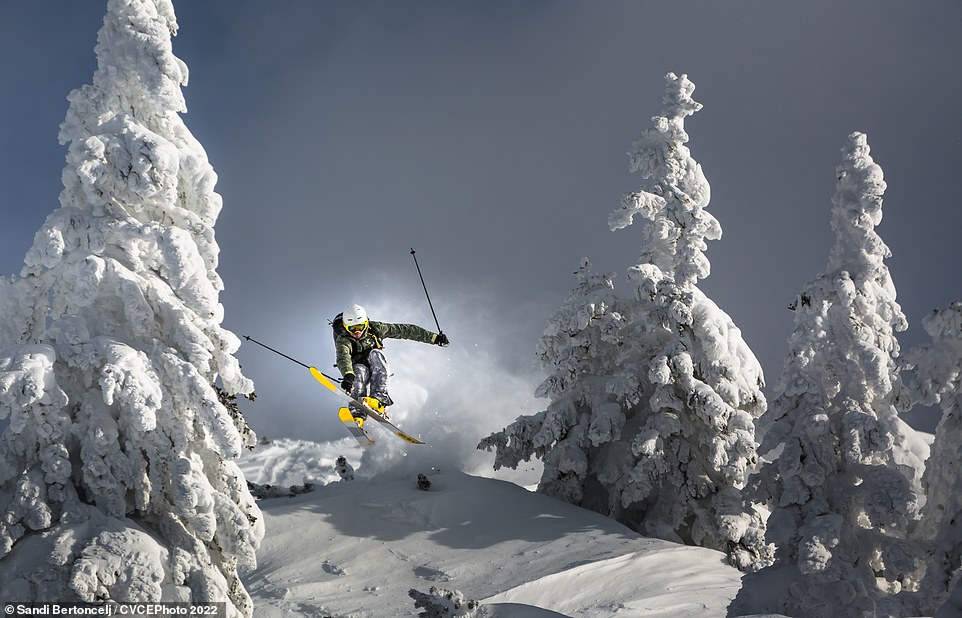 Sandi Bertoncelj’s second entry is this action shot, taken on the slopes surrounding the small ski resort of Zauchensee in Austria and handed the Mendifilm Poster Prize by the judges. Bertoncelj said it was ‘one of those perfect powder days you dream about… Super-light powder and perfectly spaced trees’. ‘What more could you ask for?’ he added

3 Things To Do In And Around Washington, D.C. This February

The Bazaar By José Andrés Opens In Washington D.C. Today

The Rise Of Fly Now, Pay Later Could Lead To Travel Debt