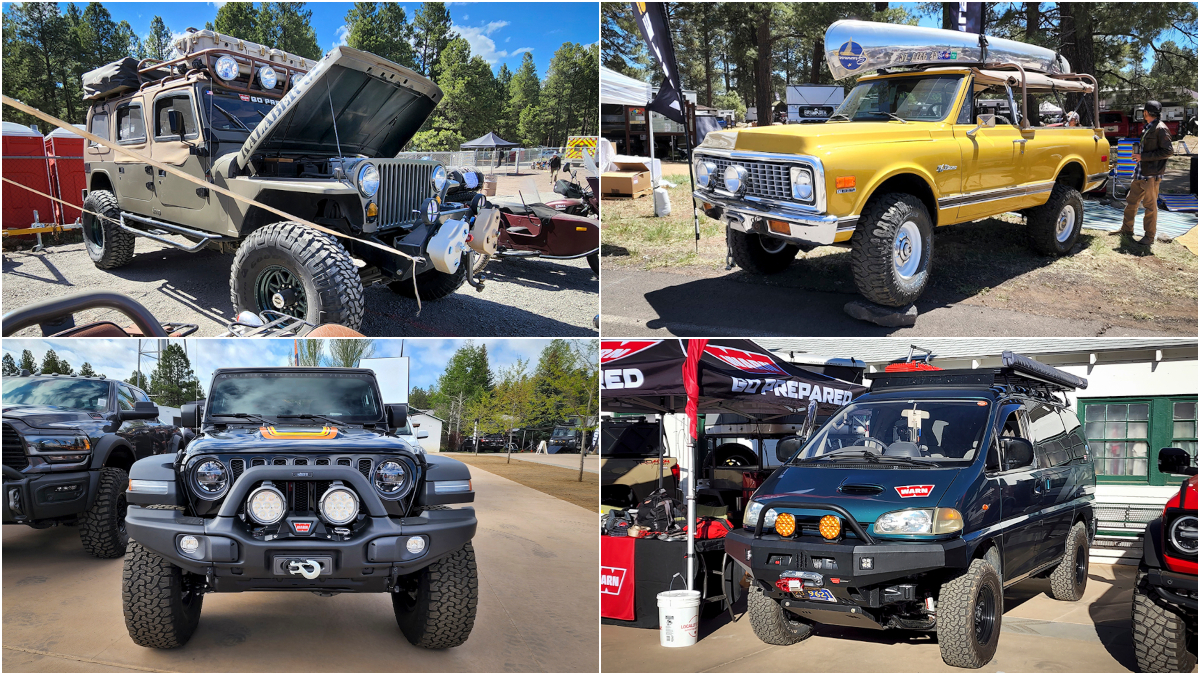 Founded in 2009 by Roseann and Jonathan Hanson, the Overland Expo event series has grown exponentially from its humble beginnings. As popularity and attendance continue to grow, the organization has added new locations and increased the frequency of events. The 2022 Overland Expo West, one of several events planned for this year, was held recently at the sprawling Fort Tuthill Fairgrounds in Flagstaff, Arizona.

Attended by an estimated 28,000 enthusiasts, the show provides an opportunity to check out the industry’s latest products and trends, view key demonstrations, experience hands-on displays and get an up-close and personal look at some coolest feature vehicles around. From customized campervans and gigantic global expedition 4x4s to do-it-yourself home builds and fully restored classics, the following vehicles represent a cross-section of the best and most unique vehicles in attendance.

This 1972 Chevy K5 Blazer once had a proud and productive life, but years of neglect sent this classic 4×4 into a tailspin of rust and a resting place amongst the weeds. However, southern California resident Ryan Kennelly had other ideas for this yellow-hued off-roader. After buying it in Reno, Nevada, with rust-laden floorboards and flat tires, he towed it 700-plus miles to his home.

Not a frame-off restoration, Kennelly crafted this K5 over the last eight years to prep it for duty as a regular runabout. A mostly stock replacement 350 Chevy engine pushes 210 horsepower and 400 pound-feet of torque to the rear wheels. The K5 Blazer’s new 4L60E Monster transmission syncs with a Holley Terminator management system, allowing Kennelly to control vital parameters, including when the torque converter locks and unlocks, when it shifts, and how hard it shifts.

Mark Tetreau of Arizona-based Kalaber Creations started building his 1971 “J1” Jeep in 1995. Tetreau, a self-taught fabricator and owner of a Ural dealership, constructed the first-ever four-door Jeep using his ingenuity, skills, and a wide array of Jeep vehicles. Kalaber Creations’ Jeep J1 is named after Tetreau’s wife, Jill. J for her name and “1” because she’s one in a million to him.

The Kalaber Creations J1 Jeep was built out of necessity. Volunteering as a search and rescue member (from 1984 to 2002), the team didn’t have a vehicle to transport a full-size Stokes basket stretcher. Challenged but not defeated, Tetreau decided to build one.

Tetreau used a 1979 Dodge 3/4-ton truck chassis measuring 7 feet by 2 inches wide, with a 131-inch-long wheelbase, as J1’s base. Next, he cut up well-used old Jeep CJ7s, CJ8s, and a ’56 Willys station wagon to build J1’s body. Initially, a Dodge 440 engine and a Mopar 727 transmission performed motivational duties, but in 2004 he reconfigured the rig with frame modifications and swapped in a 5.9 Cummins diesel and 48re transmission. Front and rear ARB lockers in Dana 60 differentials put the power to the wheels.

Additionally, the J1’s enormous size required joining two standard CJ7 hoods for a proper fit. A duo of CJ8 fenders formed the 4×4’s rear. Four Wrangler doors (with slider windows) were sourced and modified, while the rear-most side windows are reconstructed from a CJ7 lift gate. A double-wide tailgate is designed to fold onto a rear military-inspired bumper, allowing easy access to rear-stowed cargo and a custom-sliding 40-inch spare tire system. Custom rock sliders, skid plates, and an original long-arm front suspension round out the build, giving J1 ultimate capability.

American Expedition Vehicles (AEV) just launched a limited edition JL370 Classic Edition package for Jeep Wrangler and Gladiators. It’s a retro-inspired package, is available in white or black, and is based on a Rubicon trim level. Unfortunately, only 20 packages are available for each.

As it sits, the Overland Expo West Jeep Wrangler Rubicon JL weighs in at $88,000, with the JL370 Wrangler Classic package starting at around $20,000. So, if you’re in the market for a capable, cool and quality retro-influenced Jeep, the AEV Classic Edition package is a sure-fire way to bring back ’70s memories while off-roading in style.

Some may think it’s a Toyota. Others may swear it’s a futuristic home build. However, this right-hand-drive van is neither of those. Instead, it’s a Mitsubishi Delica Space Gear 4×4 Japanese domestic market import. A true unicorn in the states, it features a 2.8-liter turbocharged and intercooled diesel engine with 140 horsepower and 232 lb-ft of torque, low-range gearing, and three-row seating.

Based in Ames, Iowa, New Legend 4×4 is a shop that builds high-end International Scout off-roaders. New Legend 4×4, formed six years ago, employs about 20 people and builds approximately eight to 10 different Scouts a year—each starting with a frame-off restoration.

The 1977 terracotta Scout on display incorporates vintage decals, original Scout upholstery accented by buffalo hide, and a hybrid hard top that joins two original Scout toppers and a half-cab hard top to create an extended cab and back seat area. With each build, the company only uses original IH steel from the ’60s and ’70s to retain the vehicle’s authentic design. Their goal is to “respect the past and innovate into the future.”

It took approximately 18 months to finish the 1997 Scout. However, when all the custom-made parts, 400+ hours of sheet metal work, and the 150 hours in fabrication time required to combine three former Scout tops to create this build, you begin to see its evolution as a high-quality frame-off work of art.

Owen Mesdag’s 1964 Land Rover Series 2a is a daily driver. Purchased off Craigslist 15 years ago, he’s upgraded bits and pieces of it while adhering to its original aesthetic. Mesdag has three types of tops: a hard top, a soft top, and a pick-up cab top; typically, though, he runs with no top at all or the soft top due to its versatility.

This ex-military ’64 Land Rover features an 88-inch wheelbase and rides on heavy-duty Series 1 axles (from a 109-inch wheelbase LR) and a Salisbury differential. To Mesdag, the beefed-up setup is “overkill but awesome.” Although he doesn’t know the previous owner or the vehicle’s history, his mechanic (who worked on this vehicle for over 30 years) and the local LR community were excited to see its return after he purchased it.

Mesdag added vital ingredients to make this Series 2a more capable and ready for remote adventures. Since the factory dual fuel tanks only carry 20 gallons total, he added a jerry can for extra fuel and thus range. A WARN ZEON 8-S winch, mounted to a retrofitted Bearmach winch plate, includes a relocated control pack to keep its modern look minimal against the ’64’s front bumper and overall classic styling. Aftermarket headlights improve low-visibility situations, too.

Although this 1964 Series 2a has seen its fair share of use and abuse in its life, Mesdag has given it a new, improved life. Affectionally known as “Sarge,” this 1964 Land Rover Series 2a is a popular vehicle to see around Seattle, especially when Mesdag picks up his nine-year-old child from school.

Paul McGinley: Golf will never be the same again after LIV

These Are The Most Dangerous Roads In The U.S.