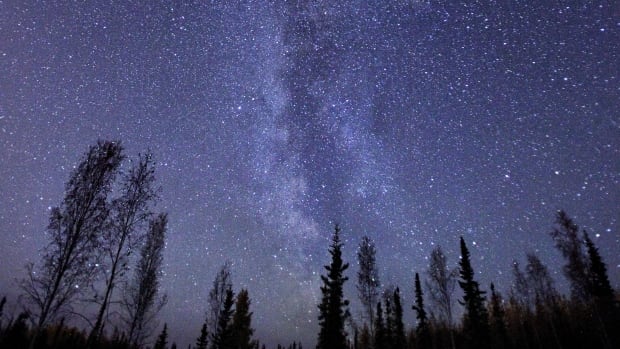 When looking up at the night sky, it’s easy to recognize the Big Dipper, but some people may not know the Dene legend that sees those same stars in a different way.

The idea of marrying these two perspectives can provide a lens to help us see stars in a new way and make science more inclusive, says Mi’kmaw astronomer Hilding Neilson.

“Then maybe we can also create a science that’s more welcoming to, say, Indigenous and other people of colour, or creating science that works well with other methodologies.”

Fred Sangris learned from his father and grandfather how to navigate and mark the days with nothing more than the stars and the moon to guide him.

Sangris is an elder of the Yellowknives Dene First Nation, and the chief of the community of Ndilǫ, North West Territories.

When he was about four or five years old, his grandfather told him the legend of Yamoòzha, a traveller who lives in the stars and would rid the world of bad creatures that could harm the Dene people.

But Yamoòzha was attacked by a rival, jealous of his powers, who chased him all over the earth. When Yamoòzha escaped to the sky, his stalker shot him in the back with an arrow.

Sangris learned that this image of the traveller with an arrow in his back makes up a constellation that includes the Big Dipper, and that group of stars plays a key role in Dene culture.

The constellation reminds them that Yamoòzha is always watching, and that if they disobey Dene law, he might return to teach the lessons again.

Sangris worked with Chris Cannon, an assistant professor of Indigenous studies at the University of Alaska Fairbanks, to write a paper on the subject that will be published in this month’s edition of the science journal Arctic.

“Those body parts [of the traveller] have a lot of efficacy for wayfinding and telling the weather, but it’s also deeply connected to cosmology, worldview, spirituality,” said Cannon.

“The Milky Way is the traveller’s trail. As he circled the world, he instilled a balance and order in the world. And so people metaphorically follow his path around Earth and lead by his example and follow the rules and protocols that he established.”

Neilson says incorporating Indigenous perspectives into astronomy could help the field of study evolve, similar to the development of the telescope.

“Modern astronomy arguably started thanks to the telescope that allowed humans to observe the moons of Jupiter and stars and galaxies. But these telescopes operated at the same wavelengths that we see with our eyes,” said Neilson.

“When scientists built the first infrared or X-ray or radio telescopes, we saw the universe in different ways that broadened and added to the stories we told about how stars and planets and galaxies work.”

When Sangris was a young man living in the wilderness, his father told him to burn his calendar and throw away his watch.

“He woke me up at 4:30 in the morning, he told me, ‘Let’s go outside that tent.’ He said, ‘You see that star over there, like a long finger going down? That finger, you keep the eye [on it] and that’s your clock,’ ” said Sangris.

As for a calendar, his father told him to keep an eye on every full moon that went by. He said that when Sangris saw his fifth full moon, he should leave the land and return home.

Even though Sangris has GPS now, he still relies on the stars and the skies to travel.

LISTEN | A chief and a researcher share ‘epic’ stories of Dene constellation:

“A lot of the teachings are designed to help you learn to be self-sufficient and self-reliant. If you’re relying on a calendar or wristwatch, you know this technology can fail,” said Cannon.

“If you’re able to commit it to memory or read it all from the land, that just plays into self-sufficiency and practicality.”

Neilson says it’s important for people pursuing science development to look at Indigenous perspectives in an effort to prevent conflict and respect Indigenous rights, like in Hawaii, where Indigenous people are protesting plans to build a telescope on sacred land.

The telescope, a multi-national effort proposed for construction on the dormant volcano Mauna Kea, Hawaii’s tallest peak, has sparked opposition and widespread protest from Kanaka Maoli, the Indigenous people of Hawaii.

“I think because of the protests, we are at a place where we don’t have consent. And the response is they don’t want our telescope there. And so we just don’t build it there,” said Neilson.

“My personal belief is we have to put Indigenous rights above our wants for big toys, even though such a telescope would be so amazing for doing research.”

Neilson says consent needs to be prioritized when dealing with Indigenous communities.

“I don’t think there is one simple way to do this since it depends on the Indigenous communities and nations that we are working with and what their protocols, needs and wants are,” he said.

“It is important that bringing Indigenous knowledges and Western sciences together supports and centres those communities. But one way we can start is to simply support and listen to elders and knowledge keepers. “

And Neilson says working in other perspectives can help create a better and more inclusive field of study for astronomers.

“We can use Indigenous knowledge and Western science to work together to do something greater than what we do alone.”