The Big Happiness Interview: How dads can reject toxic masculinity and be happier 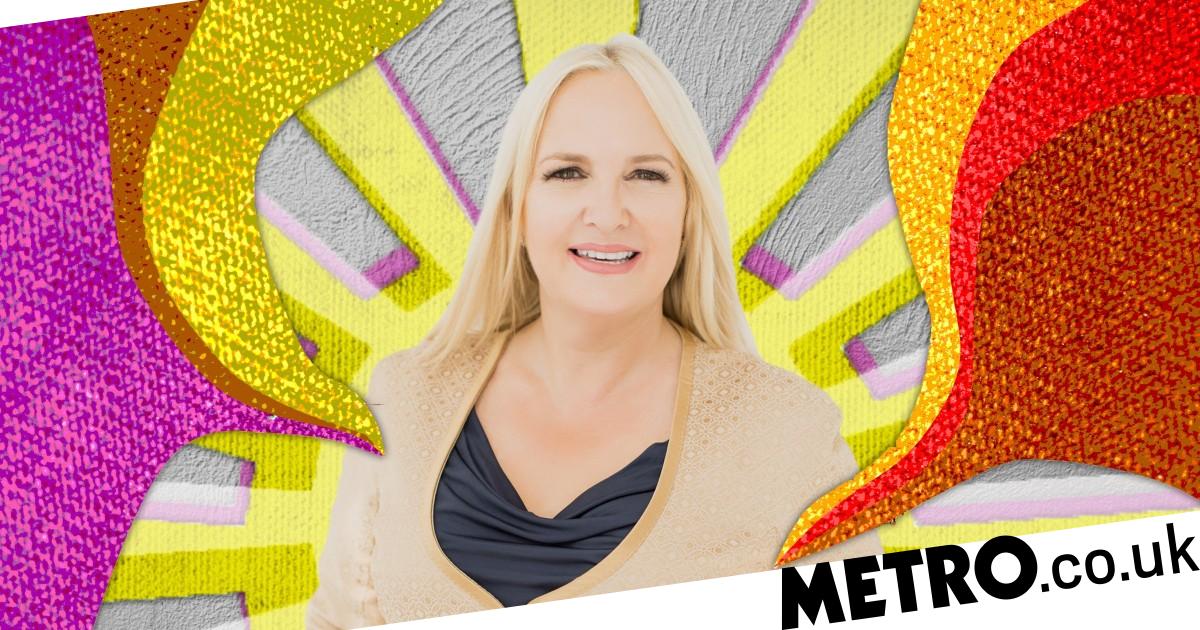 Danusia Malina-Derben’s new book Spunk, A Manifesto Modernising Fatherhood is out now and causing a stir.

Thought-provoking and combatative, Danusia offers a ‘pragmatic problem-solving roadmap’ for the kind of modern fatherhood Danusia believes will secure better futures for our children.

‘We need fathers more than ever before,’ she says, ‘but not the ones we currently have.’

Danusia is a thought leader, author, speaker and mother of ten. Her motherhood story began when she was a teenager who made it to be a tenured organizational behaviour and development academic, and then onto award-winning, internationally published leadership expert. She traded academia to head her own global firm fixing corporate boardrooms and developing top talent.

In her first book Noise: A Manifesto Modernising Motherhood she challenged conventional thinking about motherhood and how mothers ‘should’ behave once they became parents.

Danusia now hosts two critically acclaimed top-rated podcasts: School for Mothers and School for Fathers where she talks to modern parents about challenging societal narratives about what it means to be a parent.

In a Father’s Day edition of The Big Happiness Interview Metro.co.uk talks to Danusia about fatherhood and how to be a happier dad.

Happy Father’s Day! How can we celebrate our fathers today?

Let’s celebrate the majority of men who are deeply committed to the families they have.

As a woman, why did you start your School for Fathers podcast?

I’d been hosting School for Mothers and, and it had been huge success. It was inspiring to talk to mothers talking honestly about their challenges.

Even though there were a ton of excellent podcasts for fathers hosted by men, I realised it’s super rare for a woman host to talk to men about fatherhood. After a year of interviews with mothers often complaining about the current way the parenting system was set up, where men were not held accountable and therefore invisible, I had some assumptions about fathers. As an academic, I wanted to test those assumptions.

I think it’s quite easy to have fixed ideas of what the ‘other’ feels or thinks. We also might demonise the ‘other’. But I believe if we really want change in the world, we need to talk to each other and really hear and understand – so I started the podcast School for Fathers.

What did you learn?

The first thing I learned was how difficult it was for fathers to express emotions sitting beside their own gender. They talked to me about constricting versions of masculinity, fatherhood and work and the price of trying to live up to these.

I spent hundreds of hours hearing men’s choked voices tell me about their sadness at leaving their children, the effects of witnessing motherhood’s toll on women they love, plus men just not having anywhere to express their vulnerability and/or trying to learn ways to undo years of emotional paralysis and numbness, succumbing to and beating addictions and dealing with their own father wounds.

There’s been a lot of talk about toxic masculinity. What impact does this have on how we bring up our children?

Research shows that there are three components of toxic masculinity:

Is it any wonder that it’s said that ‘masculinity is a hard, small, cage and we put boys inside this cage?’

These same boys become grown men. At which point that rigid small cage becomes what many call the ‘man box’ – a construction of restrictive mainstream ideas on what it means to ‘man up’ or be a ‘real man’. It’s emotionally debilitating.

We need fathers more than ever before, but not the ones we currently have.

You are mother to ten children, six who are boys. How do you combat the man box?

In pragmatic ways. In our house, we have lots of blankets around our house and I’ve taught my sons and daughters about self-soothing. For them to acknowledge ‘I really need to take some time out;. They don’t need to be robustly heroic, that it’s ok, more than ok, to take care of themselves emotionally. It’s all about normalising feeling vulnerable.

I also encourage critical thinking with my children – I have nine-year-old triplets, two boys and one girl, and so the comparison is very intense because they are the same age. So, I get them to question any dialogue about gender-based biases.

When someone says to my daughter – ‘be careful when you’re in the playground’ but the boys are encouraged to take risks, we discuss and unpick it and I get them to question it for themselves. ‘But she’s always throwing herself off the top of the slide,’ the boys say.

When we go shopping for clothes, and the shorts on offer for my daughter are very revealing, she says to them: ‘Would you wear these?’ And the boys answer: ‘Why would we wear something that we can’t move in?’ At nine, It’s so natural for them that they are the ones leading these conversations, not me.

You write about the Father Stunter Culture in your book. What’s that?

Father Stunters are those people who assume men babysit their own children, and congratulate them for their daddy daycare sessions.

They’re the mothers who ‘helpfully’ assume fathers cannot cope and swoop in to do the job of caring for their child ‘properly’.

Father Stunters count fathers as one of the kids because ‘you’re a man and what would you know?’

Father Stunters are workplace managers jumping to conclusions about a father’s commitment to their family and mental health as less than to their career.

Father stunting is everywhere. In the media, within headlines, in drama scripts, the way adverts are structured, social policies that make it impossible for men to take paternity leave, laws designed to show that breadwinning is a father’s most significant contribution – the list is endless.

Domestically, stop being an assistant in the home. Stop asking ‘how can I help?’ and start being proactive, take the lead and become a domestic partner.

How can fathers be empowered to change that culture?

From research I conducted with 1,300+ fathers, they unanimously say that their children are the centre of their world but from this data the part they enjoy most overall about fatherhood is watching and helping. Much of societal views about fathers centre on them watching proudly while someone else is the ‘primary parent’.

I’m not just talking about changing nappies or school drop off – go deeper. What about taking the lead on the emotional or relationship education?

Domestically, stop being an assistant in the home. Stop asking ‘how can I help?’ and start being proactive, take the lead and become a domestic partner. Take responsibility for the nuts and bolts of emotional, mental and practical load of sustained care of parenting.

How do we teach our children to be safe and protect themselves?

In my family, we talk about healthy ways to armour up. Like if somebody is rude to us, or we feel hurt by somebody? Or if a child threatens another physically? For the boys, how do they protect themselves without resorting to stereotypical ways to be ‘enough of a boy’?

Arming ourselves with a strong sense of ourself is ultimately what we want and this develops as we’re growing up. Being self-possessed is something we learn as we understand what we believe in.

So talking with my children about appropriate ways to protect themselves is really about asking them to consider differing viewpoints and why their peers might see things that way and behave accordingly.

Plus as much as teaching them to go to caregivers, teachers, police etc for safety they also need to know that these people might hold boys with fixed views, like ‘boys don’t cry’, and send them away without providing help.

I think it’s important we deliberately talk about what are children are feeling. Mostly, it’s assumed that boys are just angry. It’s far more nuanced – there’s sadness, frustration, hurt pride, shame. We need to teach our children how to be emotionally literate and be able to acknowledge and actively encourage discussion about how they are feeling.

I talked to many fathers on The School for Fathers podcast and understood that many had been addicted to alcohol, drugs, work, etc because of their disconnection from their emotions.

How can men give themselves permission to feel deep sadness, abandonment, loss? The first step is being to acknowledge those emotions and be able to talk about them.

How can women and mothers help?

Women and mothers have got enough on our plates without trying to solve this one.

I actually believe if this is to change, if fathers are to have a wholehearted life with their partners and children, men themselves need to create the conditions to be able to do that with other men.

It’s showing the willingness to do the work on themselves which is crucial. It’s unpicking the gendered, patriarchal parenting patterns that are affecting their children and themselves.

Many men are sick of the way that fathers are portrayed, how they are seen as the secondary parent, seen as not as equal standing as the mother, how they’re ignored in school meetings… The truth is we need fathers more than ever and yes, we need to create allyship with men as fathers to secure better future for modern fathers and for our children.

How dads can claim equality in the home

Spunk: A Manifesto Modernising Fatherhood by Danusia Malina Derben (Triumph, £12.99) is out now.


MORE : The Big Happiness Interview: Oliver Burkeman reveals how to make the most of your 4,000 weeks on earth


MORE : The best grooming gifts for dads this Father’s Day


MORE : The Big Happiness Interview: Susan Cain on how embracing sadness can make us happier