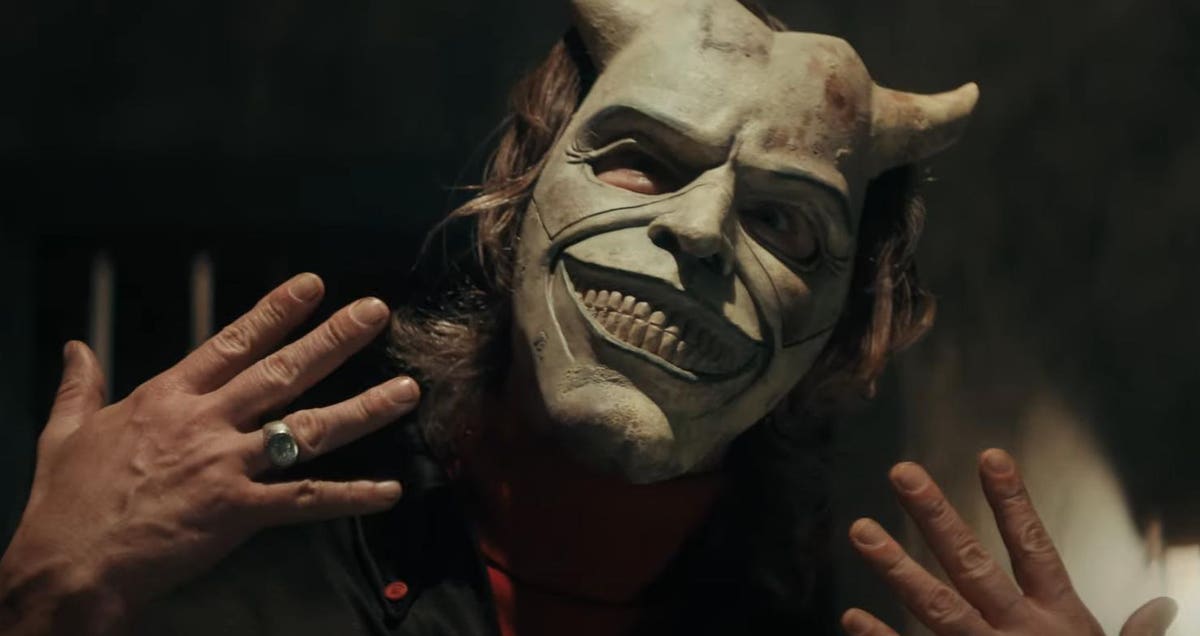 In a film seemingly designed to destroy the radio-play options of The Goo Goo Dolls’ song Black Balloon, The Black Phone is finally coming to theaters. Based on the Joe Hill short story, it’s a retro tale featuring a new and frightening killer in The Grabber, alongside some exceptional young talent. While it has some improbable plot developments and could use a few more scares, it’s still a suspenseful, strong time at the theater with a satisfying end and a good script.

Shy, but smart and loyal, young teen boy Finney (Mason Thames) is ill-at-ease in his small town. His smart, tough younger sister Gwen (a tremendous Madeleine McGraw) is in his corner, but his angry alcoholic father Terrence (Jeremy Davies) makes life at home difficult while life outside is complicated by bullies and a new string of disappearances. Young boys keep disappearing, and whispered rumors suggest it’s the result of ‘The Grabber,’ a killer in a black van that leaves black balloons at the crime scene. The police are powerless. And then the Grabber kidnaps Finney, now locked in a basement with a defunct phone… through which he hears the Grabber’s prior victims.

Directed by Scott Derrickson from a script by Derrickson and C. Robert Cargill, the film boasts a number of virtues. It’s a tight thriller with a strong pace, a wonderful retro feel, and fantastic performances from its leads. Hunt’s ‘Grabber’ is a strong, multifaceted and yet mysterious villain, with loads of on-screen charisma bolstering his menace. While all the children in the cast are strong performers, while Thames is a charismatic young Finney and McGraw’s Gwen is an absolute scene-stealing star.

Beyond a generally tight and thrilling pace, The Black Phone’s supernatural scenes are given a nice otherworldly feel, and you genuinely feel Finney’s predicament in the deadly basement. It’s sometimes punctuated with supernatural visions of the deceased boys, which provides some moments of gory scare, and these elements together make for a continually engaging watch. At the same time, while it excels on tension the film may be a little shallow in the scares department—there are many moments that frightening situations could occur but our protagonist either escapes or is left too easily to his own devices.

While the story as a whole really lands, backed by an overall successful script, some elements provoke questions or are otherwise a little convenient. For example, one character (I won’t spoil it here) gets obsessed with solving the identity of the Grabber and, frankly, he should know it. It’s a little too convenient. Black balloons are left at the scene of each crime—are we not looking for black balloon purchases in the neighborhood all these crimes in?

Speaking of, I know it’s Detroit, sure, but all the crimes happen in a short time span in a very tight neighborhood… yet somehow the Grabber leaves no witnesses (yet enough witnesses to have schoolyard rumors develop in a small time) and the police have no leads. Also, the disappeared boys predominantly disappear in a very short amount of time according to the film’s truncated chronology… was the Grabber active before somewhere else, or did this just happen out of nowhere? There may well be perfectly plausible explanations for these elements, but it would benefit the film to have a little wider world and a little more explanation.

All this said, The Black Phone really lands. It’s suspenseful, great performances, with a strong script and a well-developed sense of place and time. Ethan Hawke’s Grabber makes for a memorable villain, and the two young leads really land every scene they’re in. Perhaps most importantly, it all comes together at the end for a satisfying conclusion (though the very last scene could use a half second longer). It’s not perfect, but it’s a great time at the theater and one well worth an audience’s time.