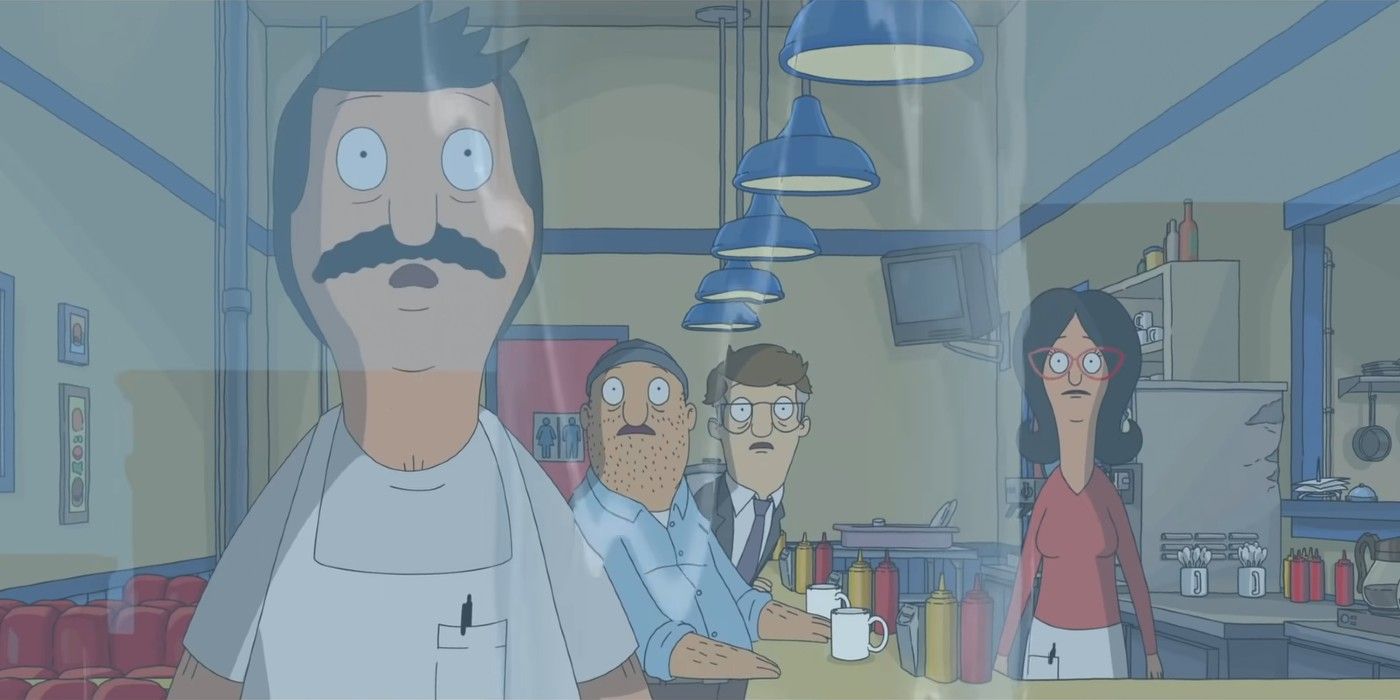 After 12 spectacular seasons with the wonderfully weird Belcher family, The Bob’s Burgers Movie hits theaters later next month. A recently released trailer didn’t divulge many details, save for the family’s usual financial troubles, Linda’s upbeat attitude and a giant geyser-like sinkhole opening up directly in front of the restaurant. While sitcom-based movies tend to raise the stakes, giant disasters in front of Bob’s Burgers are none-too-surprising; in fact, Season 3 already tackled this plot point — and even added a giant mechanical shark to the mix.

Bob’s Burgers Season 3, Episode 6, “The Deepening,” sees a brand-new and horribly dangerous addition to Wonder Wharf. Named for the Jaws-esque movie filmed in the Belchers’ seaside town, the episode — like most — begins in the restaurant, with the titular The Deepening playing overhead. Upon seeing its “star,” a mechanical prop shark, for sale online, Bob suggests that his wealthy landlord, Mr. Fischoeder, purchase the prop as a tourist attraction. While Teddy seems mysteriously put off by the shark’s presence in town, everyone else responds to the idea with enthusiasm, most of all the kind-hearted Tina, who — after hearing of the shark’s tragic backstory — aspires to form a friendship with it.

Things go predictably pear-shaped, though, when Louise — at the behest of one of her “guys,” — attempts to steal the shark’s mechanical fin. Or, more accurately, attempts to goad Gene into stealing the fin. His added weight topples the beast, sending the thrashing mechanical menace barreling past the safety tape and into the unsuspecting town. Bob, acting as Block Captain, devises a series of plans to stop it.

After road spikes, oil and a crane only make the monster more destructive, Bob puts his final plan into motion: a giant hole is dug into the concrete, apparently trapping the shark underground. The town rejoices at the shark’s disappearance until it begins to tunnel under Bob’s Burgers. Terrified, Mort, Teddy and Bob resolve to stop it once and for all.

It’s revealed that a botched love connection sparked Teddy’s hatred of the shark. Once a buff, tanned aspiring actor, his time on the set of The Deepening changed him. Eager to date his cute co-star, the shark’s unexpected movement startled Teddy, causing him to douse her in soda and ruin his chances. His subsequent grief over the rejection led to weight gain, and though it made little sense to Bob, Teddy blamed the shark ever since.

With a near-identical sinkhole forming in front of the restaurant in The Bob’s Burgers Movie, Teddy’s long-time enemy — or at the very least, the consequences of trapping it — may have once again resurfaced on the silver screen. And while long-time fans are sure to love a callback, it’s unlikely that audiences will even remember the shark — or its sweet death via soft-serve machine.

Unlike The Simpsons Movie, it seems that Bob’s Burgers doesn’t care to venture beyond what’s already been explored. But things aren’t always what they seem. Between the Belchers’ mounting money woes, a brand-new adventure with Kuchi Kopi and Tina’s apparent telekinesis, it’s likely that The Bob’s Burgers Movie will have something exciting for fans and newcomers alike.

The Bob’s Burgers Movie sinks into theaters on May 27.

Seth MacFarlane Promised a Family Guy Movie – So, Where Is It?

Stephanie Alexander urges us back to the dinner table

What Is Ethanol and Is E15 Gas Safe to Use in Your Car? – NBC Los Angeles