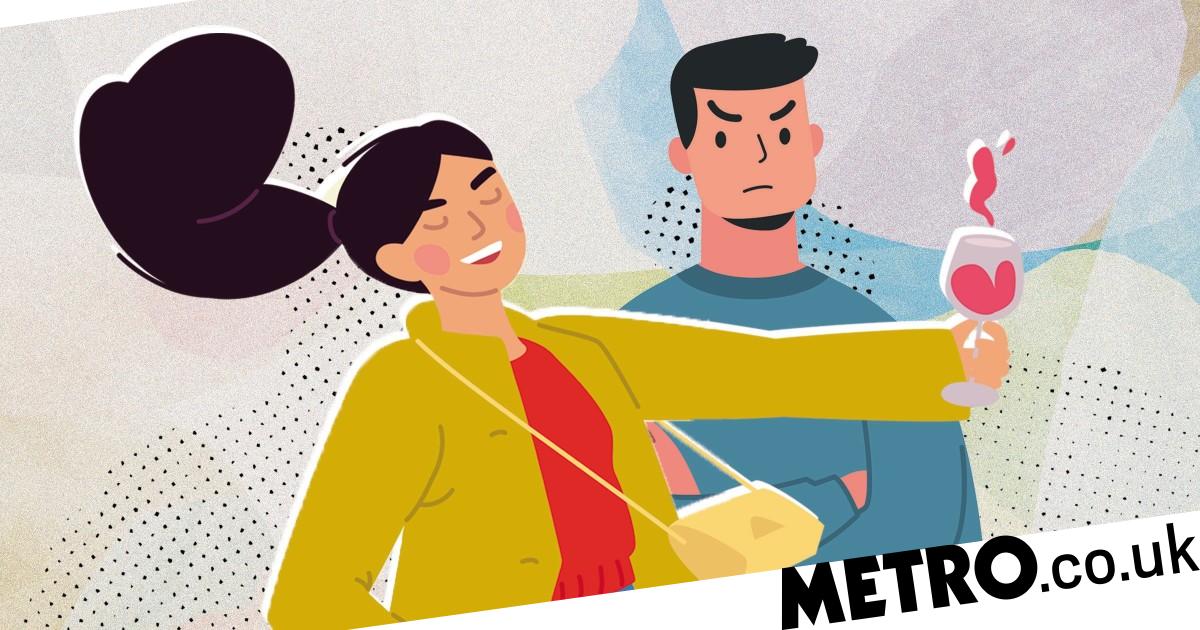 As World Cup fever sweeps the UK, slurred chants of ‘It’s Coming Home’ is set to become a familiar sound.

The sight of football-shirt clad men singing with their arms around each other is often seen as fun, just ‘lads being lads’.

But are women afforded the same level of freedom to be drunk, foolish and lairy?

The lyrics to a new song by Olly Murs, I Hate You When You’re Drunk, suggests not.

There’s a double standard to expose here, one we’re calling ‘the booze gap’.

Later in the song, he tells his female love interest to ‘quit actin’ like a fool’, because, you guessed it, he hates her when she’s drunk and enjoying herself.

This is something Hannah, a 20-something Londoner can related to.

‘My ex-boyfriend used to love drinking with his mates, but as soon as I drank with him, he’d become enraged,’ she remembers.

‘He’d act totally fine about it around our friends to be the “cool guy”, but as soon as we’d get home, he’d call me “loud” and “embarrassing”.

‘He used to deliberately invite our shared friendship group out, and call other girls that would drink “legends”, but emotionally blackmail me into not drinking by constantly reminding me that he liked “classy” girls. It never made sense to me.

‘I do think there is a massive prejudice with women drinking versus men.

‘It’s this antiquated concept of the “classy woman” – you should be funny and be able to handle your drink, but men are allowed to let it all hang out and be completely wasted.’

She isn’t alone in this experience, and a study from 2019 by a Worcester Polytechnic Institute professor found that both men and women view women who drink alcohol in a social setting to be ‘less human’.

Published in the journal Sex Roles, the research reveals the sexism women are subject to when they drink – that men don’t comparatively experience.

Researchers found all three of their experiments suggested ‘troubling implications’, and that the stereotype of women who drink being more sexually available, for example, is still upheld by some men.

Rachel*, has faced the brunt of hostility when drinking – particularly from her ex-boyfriend.

‘My ex used to get hammered and be really mean to me, but once when I was drunk and asked him to hold my hand, we had a massive argument, and the next day, I was the one who apologised,’ she says.

Being drunk meant his bad behaviour was excused, but hers never was.

‘I’ve experienced this on countless occasions,’ she continues.

‘My ex did the usual stuff of constant drunk calls in the middle of the night, asking me how to get home, and oversharing things about me to his mates.

‘All awful behaviour, but he was so apologetic the next day, so loving and sweet, that I always forgave him.

‘On the other hand, he’d put his phone on do not disturb when I went out so that my calls wouldn’t even go through.

‘I remember I once got drunk on a night out and I’d bumped into some of his friends. We all went back to his house.

‘He was livid at me for being loud and drunk. I was apologising for weeks after.

‘I was always the one that ended up apologising when alcohol was involved – sometimes I didn’t even know why.’

On this occasion, Rachel’s ex wasn’t angry at his male friends who also came back and caused a disturbance – their drunk behaviour was acceptable.

Male drunken antics were a source of amusement, she recalls, but hers never were.

‘He once jumped into a taxi that wasn’t ours, off his face, and refused to get out,’ Rachel adds.

‘It was really funny at the time but I look back and wonder how it would have gone down if it was the other way around.’

Stereotyping is a longstanding issue here, as a 2018 report by Scottish Health Action on Alcohol Problems (SHAAP) and the Institute of Alcohol Studies (IAS) concluded.

Dr Carol Emslie, Glasgow Caledonian University, commented on the report: ‘Women are still judged more harshly than men if they have been drinking […] Yet official statistics demonstrate older men make up the majority of those who die or are hospitalised for alcohol-related causes.’

If women aren’t facing hostility from others when they drink and act out, they’re getting patronised.

‘I had a male friend literally grab a drink out of my hand and said I had enough.

‘I was gobsmacked so I went to the bar and got two more drinks and told him to never do that to me ever again. It’s just controlling.

‘He was quite protective which was great, but that took it too far – who are you protecting me from? Myself?’

Susan Stewart, an author who’s written about women and their (increasing, research suggests) drinking habits, believes when we think about women and alcohol, we put them into one of four categories: a social drinker on a fun ‘girls’ night’ out, a teetotaller, a binge drinker in college, or a raging alcoholic.

These stereotypes are limiting – and perhaps they inform the way women are viewed when they drink.

A 2001 study by L A Ricciardelli et al looking at ‘high risk drinking’ in men and women sought to understand ‘society’s double standard that accepts intoxication in men but condemns it in women’.

Rachel is of the view of that ‘when a group of men get together, it’s completely accepted to assume that they will all get absolutely hammered’.

This informed idea has been with her since her experience of Freshers’ weeks at university.

‘The more outrageous and outlandish behviour the rugby “lads” got up to, the better. It’s almost seen as sweet: “aw, look at the boys having so much fun together”,’ she says.

‘I think when women get really drunk it’s seen as “unladylike”.

‘There’s also something in the fact that men don’t have to worry about safety when drinking – whereas women do.

‘So there’s also the element of victim blaming. If we get really drunk, we’ve put ourselves in danger – rather than placing the blame on the perpetrators.’

It’s a multifaceted issue – and one in which women almost always lose.

*Names have been changed.


MORE : Game app developers are using sexist adverts to reel in players – and little is being done


MORE : I was an officer for 11 years – calling racism and sexism out now gets me Twitter abuse from police accounts